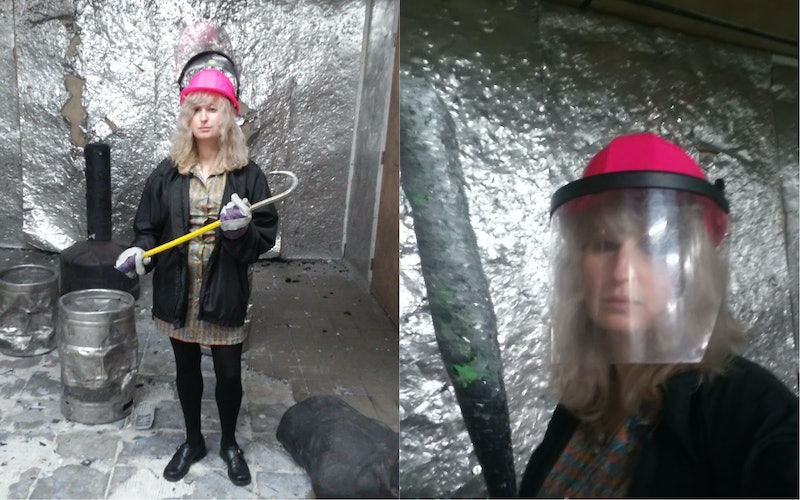 If you’re reading this right now, I bet you’re angry. I know I am. Sure, I’m also scared, exhausted and anxious — about the eroding rights of marginalized people in this country, about children being detained in immigration centers without their families, about the future of Roe v. Wade, about alleged sexual predators who spend a few months off the grid and then assume that all has been forgiven. But mostly, I’m just angry. I go to bed angry and I wake up angry. This was especially the case this past week, when I watched almost all eight hours of the Kavanaugh hearing, from Christine Blasey Ford's openly terrified testimony, to Kavanaugh's own furious, tear-filled monologue about how the Senate could "never get [him] to quit." By the time it was finished, I looked at myself in the mirror and was shocked to see that my brain wasn't running out of my ears, melted by my sheer rage. I’ve heard that this anger is the fuel that drives change, and I know that that’s true; I’ve also wondered about how to keep this anger from eating me alive, which constantly feels like a possibility. If you’re reading this, I bet you wonder sometimes, too.

This is all to explain how, last Friday evening, I ended up in a small, windowless room, wearing a construction hard hat and thick industrial work gloves, smashing a wine glass with a crow bar. I was at an “anger room" in New York City. “Anger rooms,” which have been popping up all over the world over the past few years, are exactly what they sound like: businesses whose only service is to provide customers with a safe, judgment-free place to break s***. And after the Kavanaugh hearings, I was more in the mood to break s*** than I had ever been in my entire life.

It’s not like I haven’t tried all the healthy, doctor-recommended coping techniques; I jog regularly. I take soothing baths. I leave my phone in the other room so that I don’t constantly scroll through Twitter in search of the latest outrage. But sometimes, these techniques seem like relics from a past era — a time before Trump and a non-stop news cycle that barely leaves us a moment to catch our breath. After watching the Kavanaugh hearings on Thursday, I went home and tried to relax in the bath. At about a minute in, I was jumping out of my skin. I couldn't relax. I didn't want to relax. Relaxing didn't feel like self-care to me in that moment — it felt like giving up my anger, pushing it away. And that wasn't what I wanted. I wanted to crush. I wanted to break. I wanted to annihilate something, to have physical proof of the overwhelming immensity of my anger. So I jumped on my computer to see if there was any place in town where I could pay money to safely break some glass. And, as luck would have it, there was.

At the anger room, I was issued a hard hat with protective face visor, two layers of gloves, and a nylon jacket to cover my arms to protect me during my allotted 15 minutes of smashing time. I was then led into a room filled with my companions in mayhem: a bucket of glasses, a computer printer, a rubber dummy, two barrels, two crow bars, two aluminum baseball bats, and one extremely heavy sledgehammer. I was allowed to play my own music over the stereo (I chose Phil Collins as a nod to American Psycho, my favorite movie about white male entitlement), and, as long as I didn’t throw the dummy or the barrels, I could do anything I wanted in there for the next quarter hour. Door shut, I was free to act out my dumbest, most destructive fantasies.

Prior to taking my trip to the anger room, I consulted a number of mental health professionals about my post-Kavanaugh hearing rage. None of them had a problem with the idea of taking out one's anger on a physical object in a safe, controlled setting — they just thought other methods might yield superior results. “I don’t think what you’re discussing is necessarily unhealthy,” Dr. Talia Wiesel, Assistant Professor of Psychology in Clinical Psychiatry at Icahn School of Medicine at Mount Sinai, tells Bustle. “But I don’t think it’s necessarily helpful.”

What might be more helpful? Dr. Mellissa Withers, an associate professor of global health at the University of Southern California, recommends activities like working out, seeing friends, meditating, praying, or getting a massage, as well as channeling your anger into political action. It’s “natural to feel frustration, anger or even despair” about the Kavanaugh hearings, Withers tells Bustle. But, she cautions, the healthiest path for coping involves “[reacting] to this anger without letting it overwhelm or overpower you.” “Develop self-compassion,” Dr. Withers adds. “Appreciate that you are resilient.”

Wiesel notes that people who dealing with PTSD symptoms or who felt they were retraumatized by the hearings should seek help from a mental health professional, rather than try any at-home coping methods. For those of us simply dealing with anger about the situation, Wiesel notes that options range from using dialectical behavioral therapy techniques, to seeking immediate relief in a soothing activity like a long walk, to figuring out what you're most afraid of happening if Kavanaugh gets confirmed, and then figuring out if there’s “something you can do about it.” “I think doing something that you really feel aligns with your values, that feels constructive, would probably be a really good idea,” Dr. Wiesel tells Bustle.

Dr. Nancy Sherman, Counseling Coordinator & Professor of Counseling at Bradley University, says that "the best thing to do with anger is to talk it out with a trusted friend or professional counselor and take action that can make a change and help us feel more powerful," but also that any expression of anger that doesn't hurt you, someone else, or the things you care about in any way can be helpful. "Hitting a pillow with a bat or bouncing a basketball against a wall could work if we don't mind destroying our pillow!" (it should go without saying that you shouldn't break things at home, or in any situation where you or someone else could get hurt)

I took their advice seriously, and didn't really expect any major, transformative moment of catharsis in the anger room — though I still secretly hoped I'd have one.

Alone in my rage-booth, I tentatively reached a gloved hand into a bucket full of glassware, and hurled one wine glass against a wall, and then another. And another! I had never purposely broken anything before in my life. It was exhilarating…until it wasn’t. I smashed all the glasses quickly, one after another, and realized, to my shock, that there were still 14 minutes left in my 15 minute session. I picked up an aluminum baseball bat and began to hit the printer, which was shockingly sturdy; nary a chip flew off it as I pounded away. As I began whacking the rubber dummy, I realized something shocking: being destructive was boring. So, so, so boring. I thought it would be a breakthrough, a “f*** you” to the men in this country who were constantly smashing things up without a care in the world — but really, it was like a date where you know things aren’t going to work out before the appetizers even arrive. The next 10 minutes passed more slowly than any other 10 minutes in my recent life.

I left the anger room still angry about the Kavanaugh hearings, still angry about the state of the world, still afraid that one of these days, my brain would genuinely liquify from all the white-hot rage stored within it. I realized that my urge to smash up something breakable, instead of deep breathing or phone-banking, may have just been my tendency towards self-destruction asserting itself in a new way. I realized that a day in which you break 10 glasses, it turns out, is very similar to a day when you break zero glasses, in the end.

But while I didn't experience catharsis in the anger room, I did feel a moment of distraction. As I struggled to lug the enormous sledgehammer across the room to hit the printer and wait out my 15 minutes, I was in the present in a way I hadn't been in months — not arguing with internet enemies in my mind, not worrying about what horrors the next news cycle would bring. I was just a body, trying to lift a heavy thing across a room. It felt good, and more soothing and grounding than any meditation app or self-care sheet mask routine I had tried. Sure, I probably could have gotten the same out of a CrossFit class. But at least I got some cool pictures.