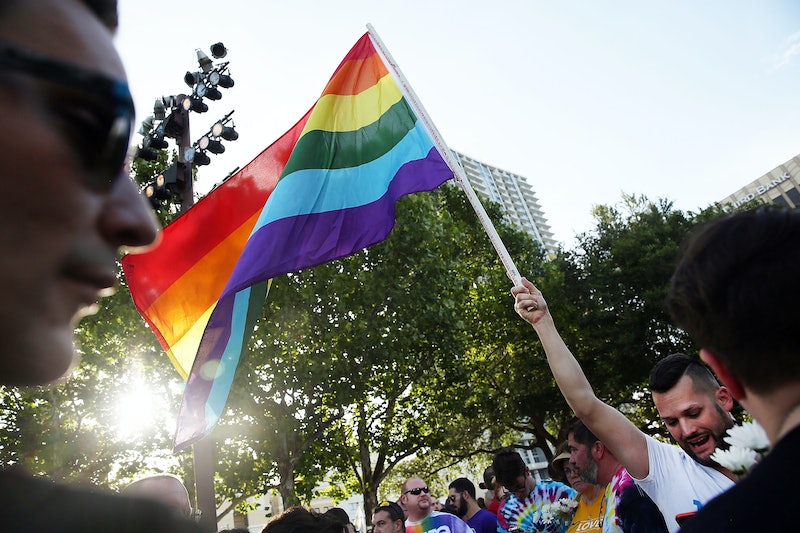 One year ago, the LGBTQ community was reeling worldwide — and so was I. One Sunday morning, we woke up to news that 49 people had lost their lives the night before when a gunman full of hate stormed the Orlando gay club Pulse and killed 49 people. The victims were out dancing, being themselves, in what was thought to be a safe environment. You and your friends have probably done the same without any consequence countless times. So have I.

The shooting became the top headline of the news for weeks, but I couldn't bring myself to write about it. Not just for Bustle, but for anywhere. I commend my friends and fellow members of the community for their thoughtful articles, tweets, and Facebook posts. My news feed was not a dark and scary place in those days, but rather was full of messages of love and forgiveness.

A year later, I can write about it. And I must, because the world is a much scarier place for LGBTQ people, especially trans members of the community, than it was just one year ago.

Of course, I'm talking about the election of President Donald Trump. If you remember back to his reaction to the shooting, which is not just the largest mass shooting in modern American history but also the largest anti-LGBTQ hate crime, Trump only spoke about "radical Islam."

Instead of standing with the LGBTQ community and acknowledging, like many did (including out Sen. Tammy Baldwin), that gay, lesbian, bisexual, transgender and queer Americans would be feeling this especially, Trump attacked immigrants and refugees to further his America First agenda. He ignored LGBTQ people, noting that "all Americans of all backgrounds and beliefs" need to be protected.

He's only continued this same path as president, and as a result LGBTQ people are less safe than they were under Obama — especially trans Americans. Remember that Trump's attorney general Jeff Sessions and Secretary of Education Betsy DeVos decided trans students shouldn't have the federal government on their side when it comes to living out their gender identity and gender expression at school. That's Trump's antipathy shining through.

We must oppose these moves, as it helps create the very society that leads a young man to attack a gay night club. It's not "radical Islamic terrorism" that led someone to kill all those people. It's anti-LGBTQ hate that fermented over a lifetime, living in a country that doesn't treat its gay citizens as equal. That needs to change, and unfortunately it will have to happen in spite of the Trump administration.

Luckily, though, LGBTQ Americans and their allies are not afraid of standing up agains these policies — and the many others that would adversely affect lesbian, gay, bi, and trans Americans. The border wall, the Obamcare repeal, travel ban and more affect LGBTQ people too. And as you saw in Washington, D.C., this weekend, plenty of people are willing to be out and proud in their opposition to discriminatory policies.

I was unable to write about this then, but I am now. I hope you'll use your voice to support LGBTQ Americans, as well as all the allies and friends who have been attacked by the Trump administration.