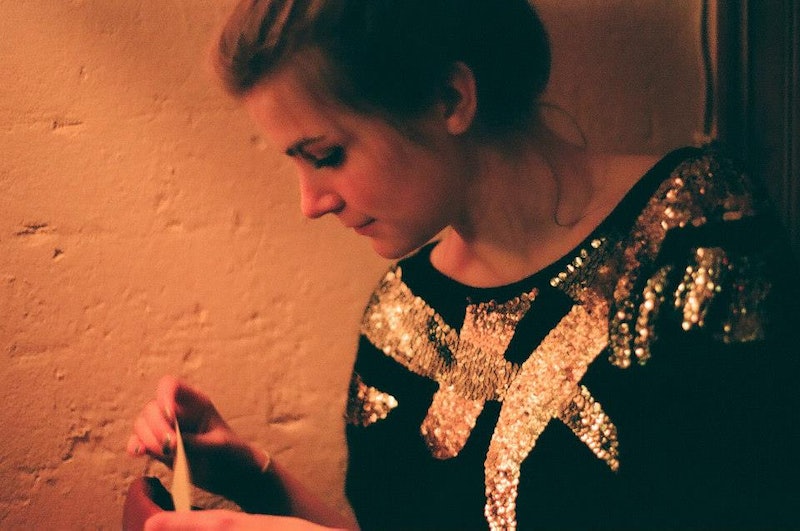 I think I must have read as a very rude baby. Before I reached preschool age, I spent my days toddling around the house in pursuit of whatever private games I’d invented inside my head. My mom would poke her head into the living room, where she’d find me rifling through a tub of dress-up clothes with the gusto of a hungry raccoon clawing through some trash, or frying fake eggs at the Fisher Price stove, or building a fort out of all the couch cushions. Did I want some company? she’d ask, an offer I apparently always turned down with a polite no. So says my mom: I don’t actually remember any of this.

What I do remember was being labeled shy when I did eventually start kindergarten. I had friends, attended birthday parties at the kinds of themed venues that dot Midwestern strip malls, went on play dates, all things kids do. Only I didn’t talk much, leading adults to suspect I experienced some anxiety around verbalizing my feelings. I remember having the concept of shyness explained to me: reserved, quiet people who found themselves either fearful or nervous in the company of others. I did not then and do not now think shy is the right word. As a kid, I didn't disdain the company of others; more exactly, seeking that out didn’t always occur to me. Often lost to an active imagination, I felt fairly content to entertain myself. If other people wanted to join, that was fine; if not, I’m not sure I noticed.

I never grew out of that: 20-some years later, I still find a solo existence entirely comfortable, and on many days, preferable. Only now that I’m approaching so-called "marrying age" — or, the age at which every medium-serious to very serious couple you know makes a kind of group pact to tie the knot — people seem more inclined to ask not only about my relationship status, but also about my eventual plans, as if unsatisfied by my failure to partner up thus far. Am I seeing someone? Who is he? What does he do? Will we one day settle down? Don’t I want to spend my life with someone?

With respect to that last one, my answer remains a firm maybe: It’s hard to envision any kind of specific future when current events heavily suggest we are all hurtling into a nuclear sun. Still, I suppose that, if marriage or some similar arrangement eventually materializes, it will be because I am confidently happy enough that buddying up forever feels like the right and natural move. I am not averse to the idea of a life partner, it’s simply not something I actively want or work on the same way I do certain closely held career goals; a space of my own; the specter of financial stability; relationships with my friends and family.

The imperative to find that person never pops into my brain with any regularity — unless other people bring it up, as they sometimes do. Most often, these people are older, perhaps traditionally minded relatives or friends' parents, posing the questions at a wedding or similar group event where the only other single people are teens. Still, I don't see my inclination as a rare one: Millennials are infamous for many things, chief among them their reticence to marry. According to 2017 data from the Pew Research Center, the U.S. houses more singles than ever before; in fact, 61 percent of people under 35 choose singledom. In a recent Bustle survey that asked singles to pick their top two priorities above dating, 60 percent of people said they're currently prioritizing self-care; 56 percent said their career is their priority. So the refusal to acknowledge that going at it alone might be a lifestyle choice, rather than a phase to be grown out of, strikes me as silly.

The sense of not being understood on subjects great and small makes me feel isolated even within a partnership, and ultimately, a hell of a lot lonelier than just being by myself.

Is it arrogant to assume, in my relative youth, that I won’t one day find myself lonely, all my loved ones paired off? That I definitely won’t ever want kids, and that if I do eventually change my mind on that one — which, to be frank, seems like a hair-thin possibility — I’ll be able to do the damn thing myself, on the infamously lucrative income a freelance writer rakes in? Maybe. But when you’re with a partner who doesn’t fully fit, myriad tiny tells slither up through the cracks at every turn: The pestering questions about what you are thinking at any given moment; the inability to agree on anything from movies to dinner to bedtimes to best sexual practices; the constant spiraling into the same circular argument. The sense of not being understood on subjects great and small makes me feel isolated even within a partnership, and ultimately, a hell of a lot lonelier than just being by myself.

I have had precisely those kinds of relationships — the ones where you keep finding yourself mired in the familiar originless fight, crying from sheer frustration at not knowing how you got there but knowing beyond the smallest flicker of doubt that you will never achieve understanding — and come out feeling like I don’t want to be with anyone but me. Like I want to remember which things I miss when I don’t have time to do them; the space to consider what actually makes me happy when my happiness isn’t tied to someone else’s.

Bad relationships tend to have that effect on people: A full body hiss elicited at even the idea of going through the slog again. But regardless of the quality of any given relationship — because yes, I’ve also had the good ones that help me see where maybe someone might want to do this 'til death — the only person who’s ever going to always be around is you. So I have tended to pile priority on the other things I want in life. Selfish? Only if you think anyone with a uterus owes the world more children, and children require a co-parent.

Because here’s the thing: People seem less prepared to grant single women the latitude to make their own choices, and an avowedly single woman remains a point of interest in ways single dudes do not. Single men enjoy rascal-y bachelor status into their 50s and beyond, and rarely do people moralize about it; indeed, they seem pretty fine to let men place career over personal partnership, or to brush off their solo lifestyles as, "Oh, he's just having fun." Meanwhile, women of the same age get labeled old maids or similar: Indeed, when I typed “older unmarried woman” into Google, per autofill’s suggestion, I turned up not a photo of Jane Fonda, but a Wikipedia entry for the word “spinster.”

Despite evidence to demonstrate older women’s psychological wellbeing rarely depends on their relationship status, there’s a certain connotation of sadness to that word, a wondering about what's wrong with the person, that simply doesn’t stick to its roguish equivalent. And while people — prying relatives, perhaps — might still ask a straight, cis, 28-year-old dude about his relationship goals or lack thereof, their eyes don’t tend to glaze with pity when he says he's not thinking about it at the moment. Maybe it’s the assumption that he has time to find his counterpart; maybe it’s the assumption that he has more pressing things to focus on than dating. Either way, the implication that a woman doesn’t is condescending.

Part of this problem stems from the expectation that every womb ticks clocklike toward inevitable baby fever. Part of this problem also stems from the centuries-old institutions that anchored women to men, sold off their autonomy, and fenced them into domestic settings. And now that we’ve been living with the reality that relegation to the home leaves many people feeling deeply unsatisfied — that women are, and should be, equal players in the society they inhabit — maybe part of the problem also stems from the assumption that women want to Have It All, and All still includes the spouse.

Granted, not everyone reacts this way to my lack of agenda when it comes to the life partner hunt. I’m lucky to come from parents who never pushed marriage as an ideal, and value my happiness over the existence of grandchildren or a constant companion. And I’m lucky to live in a time when women get some degree of autonomy. But the idea that a woman would indulge it still seems, somehow, to elicit surprise. I don't want a life partner, and I don't think that's a very big deal.