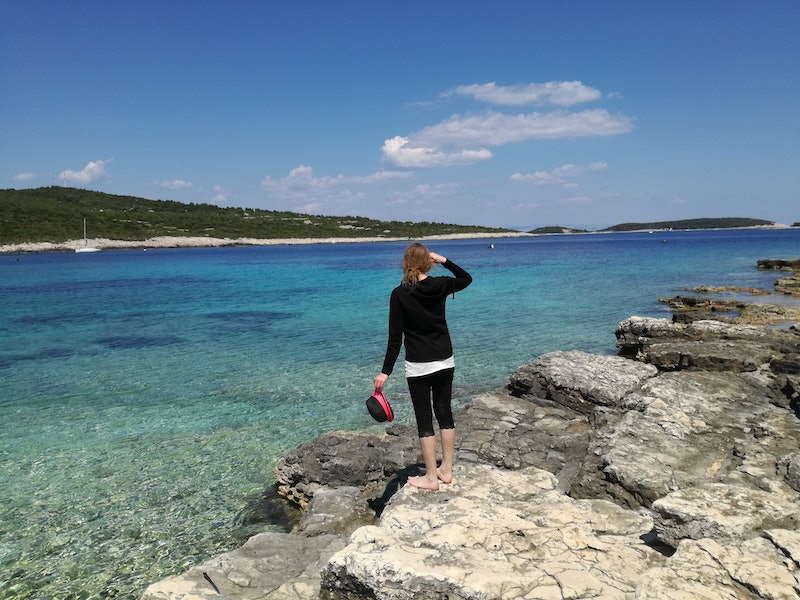 I never thought I’d say this, but I’m starting to miss dating apps. I decided to give them up for the entire year, and it was going fine … until this past month. I met some great guys through friends, at parties, and at events — like speed dating at a ski resort — but for a variety of reasons, the timing was off.

I mainly live abroad, but have been back in America lately. When living out of the U.S. for nearly two years, I found it was much easier to meet dates in real life than stateside, especially in Los Angeles. I lived in L.A. for years and, like other big cities, it’s not the easiest place to date — people seem to get distracted by all the dating options they have, both in-person and online. Recently, I even overheard a group of guys at a party talking about how being rejected online is better than in-person if they approach someone. Comforting, right?

Back when I lived in L.A., I met several long-term boyfriends in real-life situations through friends’ various social events, as well as some through apps. But now, as I work remotely in various cafés around the city, people seem more interested in having typed conversations on their phones versus actual ones in person. If I talk to them, they seem stunned. Inadvertently, I started conducting my very own Bumble-type experiment, but offline, even without realizing I was doing it.

At one café, two guys at the table next to me were talking about the TV show they worked on. Since I used to work in TV production, when one of the guys went to the restroom, I mentioned this coincidence to the one who was sitting diagonally from me. He could care less — he gave me a whole 10 seconds of his time and quickly went back to looking at his phone. Was this what it’s like to be a guy and approach someone, I wondered. And I wasn’t even trying to pick him up; I was just trying to make innocent conversation. I wanted to move tables, but thought that would be awkward. So, I stayed and kept working, turning as pink as my laptop, and wishing they would leave soon. They did, and without even a glance or a goodbye.

Making the first move on an app like Bumble is one thing, but making it in real life is another. I’m an extrovert by nature and can talk to anybody, but the above definitely made me second-guess my impromptu pseudo-flirting skills. I asked some L.A. friends who don’t use apps how they meet people to date. One guy, Todd*, said, “I don’t.” He gave me an example of waiting for a machine at the gym and commenting on a woman’s green juice drink. “I wasn’t even interested in her, but she was on my machine, so I thought I’d say something instead of stand there awkwardly, and she immediately said her boyfriend loved this green juice drink, too,” he said. I cringed. “So, I give up. I’ll just let women approach me — which won’t happen — but apps are just easier, especially in L.A.”

As a dating writer, experts often give me input for articles and say to just do activities you enjoy and you’ll meet someone there. In spite of Todd’s awkward experience — and mine — I wasn’t going to give up; if I wanted to talk to someone, I’d talk to them, platonically or not. However, as a woman, I must say: it is nice being approached and courted, but I don’t think it’s necessarily the norm anymore.

About a week later, I was at that same awkward-TV-moment café, trying to meet a Friday night work deadline. I kept putting in my earbuds, but then removing them, distracted by a guy teaching a paint night to about a dozen people. Aside from learning about the guy — he was from the Midwest like I was, new to L.A., and his passion was drawing — I was also hypnotized by the art. They were painting this beautiful mountain scene that reminded me of a road trip I’d taken to North Carolina’s Blue Ridge Mountains in 2016 after my grandma died, and I was mesmerized by how the students’ blank white canvases suddenly turned into a beautiful blue mountain range with a pink and orange sunset behind it. I had to have this painting.

When the event ended, I decided to ask the instructor, Zach*, if I could buy one; after all, he had two — one that he’d painted beforehand and one that he painted while he taught. Zero percent of me was flirting with him, but I felt the painting would be an homage to my grief road trip and my grandma. “Sorry, I can’t sell you one,” he said. “But I can give you one. Take your pick.”

I happened to be wearing pink and blue and matched the painting, so Zach and I laughed as he took a photo of this coincidence. Then, we talked about the Midwest, his move to L.A., and our passion projects — his comic strip and my work-in-progress book. A few days later, he said I should come try a paint night, so I did. A few days after that, he suggested we meet again, but for dinner, “no painting this time,” he said.

So, as much as I may sometimes miss dating apps and the crutch they provide, having an endless amount of swiping options in a big city like L.A., there’s definitely value in not using them. And those matchmakers were right. If I just continue to do things I enjoy, the rest will happen naturally. Sure, there’ll be people like the TV guy or the gym girl, but there’ll also be people like the art guy. And, when it comes to dating, hope, and maintaining a positive attitude, are key.

*Notes names that have been changed for anonymity.