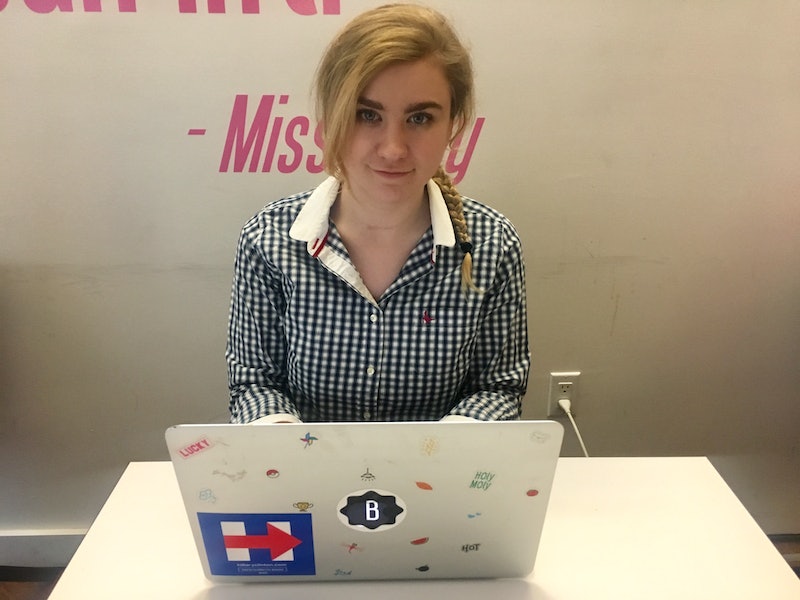 If my bank account were sentient, it would shake its fist and rue the day I figured out how to use Google wallet to autofill my credit card information for online purchases. One flick of a button, and bam — auto-filled address, auto-filled credit card, and 30 fewer seconds for me to squint at an online purchase and think, "Huh, do I really need a sixth piece of Hufflepuff paraphernalia in my adult closet?" (I mean, yes, but that's an essay for another day.) I'd gotten so used to the ease of it that the idea of giving up online shopping for any reason seemed silly.

Enter Bustle's money series, Get Money, a stream in the Bustle app focused on tips and tricks for saving money. While I budget my life to an almost annoying degree and don't necessarily need any more tips on saving money, I did have a question that could only be answered through my own experimentation: if I stopped shopping online, would I save more money? Or would it actually be more expensive in the long run?

Before the experiment began, I was under the impression that I didn't shop online all that much. But I realized after a scan of my recent purchases that, in fact, aside from eating out and getting groceries, a whole bunch of my purchases had happened online. And to be fair, this isn't necessarily a bad thing. I'm a firm believer in investing in Amazon Prime — especially living in a car-less city, nothing beats the ease of free shipping on a boatload of toilet paper, paper towels, or other quick fix things you can see price comparisons on without just settling for the first one you manage to find in the city. In fact, in New York, it's often significantly cheaper to grocery shop on Amazon Fresh; for instance, a box of Special K is $6.29 in my nearest grocery store, and a mere $3.98 online.

But as Spider-Man oft tells us in his many, many remakes, "With great power comes great responsibility." While he probably didn't specifically mean, "With access to ridiculously easy online checkout comes the ability to #checkyourself before buying stuff you 100 percent do not need," the sentiment still applies — and I am definitely guilty of buying things I don't need online. So when I embarked on this experiment, I ventured to discover whether online shopping had anything to do with how I allocated my money — and if the results would sway me to start spending it other ways.

The first week I had to do something grueling: look back on last month's finances, and figure out just how much I was spending online.

My credit card statement (gulp) between January 20 and February 20 of this year — aka, the month before this experiment began — racked up a whopping $815. This is unusual for me (I usually aim to spend about $700, combined with utilities and my monthly MetroCard), and while some of this can be blamed on unforeseen one-off expenses, some of it can also be explained by me going on a bit of a bender during an online sale. I discovered upon further examination that $303 of it was online purchases. Of the ones that were the most glaring were $52 going to Seamless orders, and $75 going to an online retail sale that popped up in my inbox. (FOR THE GLORY OF HUFFLEPUFF!!)

The first week was mostly about setting the terms of the experiment, because it turned out to be a lot broader than I thought it would be. "Online shopping" wasn't just the occasional Amazon purchase — it was also Seamless, my Starbucks card reloads, in-app purchases on my phone, and subscriptions to music platforms. While the easy work around for food delivery was getting up off my butt and getting it myself, I realized there was no workaround for the others. I was suddenly having to stand in line for 20 minutes my weekly Starbucks treat-yo-self breakfast. I couldn't try out the extra features I was curious about on Hinge for the monthly fee. And to be honest, for the sake of the experiment, I should have just temporarily canceled my music subscription, but I didn't, so now I feel $9.99 closer to being kind of a fraud.

It certainly put forth a lot of interesting points on the time-versus-money debate — especially when (le gasp) I realized my favorite pair of jeans had finally surrendered to my constant sitting criss-cross apple sauce at my desk chair, and sustained a rather inelegant crotch rip. I started looking for them to re-buy online and put them in my cart on autopilot, only catching myself at the last second. But then I had to wait three days, take two hours out of my Saturday to walk to and from the store, and then couldn't even find the jeans I wanted. I ended up settling on a new pair, and then (gulp) also bought two shirts I did not need, and wouldn't have bought if I'd been shopping online. In other words, Week One was not looking so pretty for me.

With week one out of the way, I figured I was older and wiser, and would not relive the disastrous jean hunt of the week before. But oh, my friends, it was about to get worse. Much, much worse.

Okay, fine. Really, just a bunch of things went on sale and it kind of crushed my soul that I couldn't buy any of them. There were Star Wars-themed towels on sale at Disney! Beauty and the Beast merch at Hot Topic! Harry Potter sweaters on Etsy! (I SWEAR I AM A 25-YEAR-OLD WOMAN, MOST OF THE TIME.)

Really, the struggle here was not at all a practical one this week, but a psychological one. While it feels like I only cave in and make this impulsive, nerdy purchases every once in a while, the frequent urges forced me to look through the past few months of purchases, and I found that I was spending money buying fandom-related things online every two weeks or so — sometimes dropping as much as $30 for something I truly did not need. And though the fandoms were vast and often unrelated, they all had one thing in common: I'd seen the sales for their merch in my inbox, or in a Twitter ad, or in some other strategically placed content online meant to take me exactly where it did.

I made it through the week without buying any of it, but I did run into a snafu getting my sister's birthday present. I'd known what I wanted to get her, but hadn't ordered it yet; I ended up physically going to the Urban Outfitters 12 blocks from me and having to special order it in store, since they didn't have her size in stock. In the end, it got shipped to me anyway, so ultimately I didn't save any money but lost some more time.

On March 14, there was a weather event some of us not-so-affectionately dubbed "Snowpocalypse" that hit the east coast. I had enough warning on it that in literally any other circumstance, I would have added what I needed to an Amazon Fresh cart and had it delivered the Sunday before the Tuesday storm, . Instead, I ended up sacrificing my time, my dignity, and the flesh of my inner elbows going to the hellscape that was the local bodega and schlepping it all home — then going back and singlehandedly carting 24 water bottles into the building after we got yet another warning from our building that the water might shut off.

It was not a good look.

And the supplies — while not all strictly necessary (Sour Patch kids are not exactly survival food) — ended up costing me in the long run. I spent about $70 grocery shopping for staples for the week, and when I re-priced it on Amazon Fresh, it would have come in closer to $45 — and I would have been spared the long lines breathing in the existential panic of a thousand New Yorkers who, for some reason, all needed a lifetime's supply of milk.

The important thing is that we survived?

The end of the month two things always happen without fail: I reach the edge of the little moon that is my budget, and I suddenly have a desperate, illogical, ridiculous need to Buy A Thing. Like I will rise from the ashes of my destroyed budget like a (fashionable!) phoenix the next month when it resets. I could not begin to explain this self-sabotage if I tried, but I do know that online shopping facilitates the urge like whoa.

I mean, I don't go bonkers. But I'll treat myself to a $50 pair of sneakers, or order fancy sushi on Seamless, or some other variety of ultimately unnecessary things that would be put to better use someday when I am old and retired and writing on the internet doesn't pay my #bills. That week, having banned myself from online shopping, I managed to avoid the late month splurge ... but by the skin of my teeth.

The month prior to the experiment, I'd spent $815. At the end of the experiment month, I'd spent — approximation of an internet drumroll, please — $805. And while a ten dollar net loss might seem like something to celebrate, it most certainly was not.

I hate to sound like a cartoon villainous CEO of the oil tycoon trying to gut the Powerpuff Girls (it's been awhile, OK?), but time truly is money — and when I didn't online shop, I wasted a lot of it. I wasted it walking to stores, I wasted it standing in line, and I wasted it waiting at Starbucks to spend the exact same amount I could have spent if I'd ordered over mobile and swooped in like a bat to pick it up like I usually do. Does it sound super entitled to value my time like this? Maybe, but let's break this down.

When I was working as an office assistant, I was making $12.50 an hour, doing the kinds of tasks that I was suddenly doing a lot more of — i.e., running around, waiting in lines, picking things up. If we roughly estimate that not shopping online cost me about five hours of time a week running errands — which, in New York, is not at all high balling it — then I wasted $62.50 a week in my own manpower, coming at a total of $250 a month. Twenty hours that could have been spent writing or learning or doing something more productive. Heck — 20 hours I could have spent watching Netflix, or de-stressing in some way that made me function better in the real world!

So while I technically saved money on this venture, it was not nearly enough for me to consider giving up online shopping — compulsive Hufflepuff swag purchases be damned.