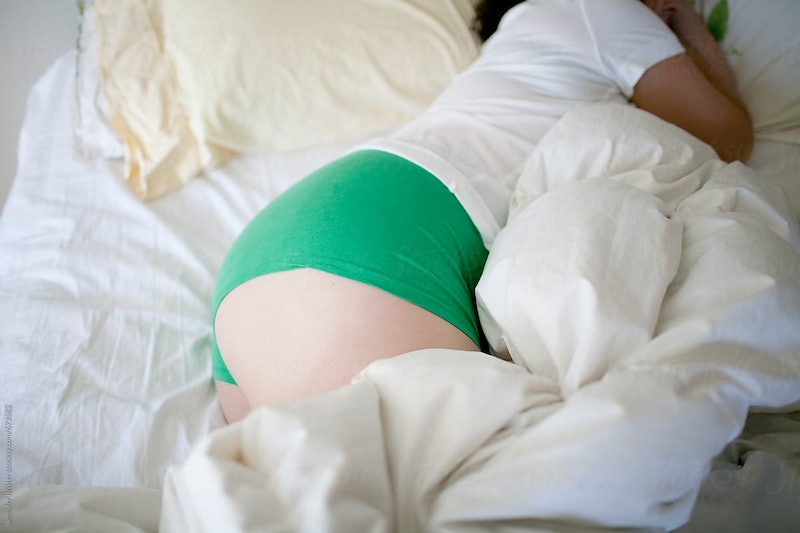 In a world that's arguably as divided as ever, I like to think there is something that unites us all. It's not love or hope or a deep, universal appreciation for Olive Garden's unlimited breadsticks. It's that bottom layer of your bra and underwear drawer that houses The Underwear That Shall Be Avoided At All Costs (although, OK, it might be the breadsticks, too). You know the pairs — they're too tight, or they pinch, or they don't stay up at all. You hate them. They're a nightmare. But every other month or so you run out of other clean underwear and you have to reach for one of those pairs you hate. "Maybe they're not as bad as I remember," you think to yourself as you slip them on. But, without fail, five hours later you're sitting at work regretting your whole life.

No matter your personal style or how much you shop or whether you prefer thongs versus briefs, I'd be willing to bet my life on the fact that you, too, have this selection of Truly Horrible Underwear. For a long time, I had it, too. Day after day, I would push all the pairs I hated around until I finally, to my great relief, found a comfortable pair hidden in the drawer. But inevitably I would eventually get to laundry days where I had no choice but to wear the pairs I hated. And despite the fact that I was uncomfortable and miserable, hating how I felt in them, I never threw them out. The cycle continued.

As part of a delayed 2018 resolution to live more intentionally, I've spent the past six months or so trying my best to be more intentional about, well, just about everything. When I noticed a pattern in my life that was uncomfortable or upsetting, I tried to question it when before I would have just accepted it as how things were. Sometimes this meant totally changing old habits (putting an end to an exhausting, lifelong cycle of dieting, for example). Other times, at the very least, this looked more like having a conversation with myself. Even if the end result wasn't a total 180-degree change, just having the conversation was sometimes illuminating. When one day a couple months ago I found myself one day putting on a pair of underwear I hated, I took a beat to remind myself that I had owned and hated this particular pair of underwear for four years. And yet there they always were, smushed into a ball and pushed to the back of my drawer month after month.

And as quickly as that, it occurred to me: What if I just threw them out? What if I just threw out all of the dozens of pairs I hated? What if I took time to find pairs that fit my current body, felt good, and I didn't dread putting on every time I got to them? Why not? I'm privileged enough that I can afford to replace clothing that doesn't work for me every few years or so. But even knowing this, I felt hesitation.

Notably, though, I did not feel this hesitation when I recently bought a new outfit for New Year's Eve or got a fresh manicure or invested in a new pair of black leather boots on Black Friday. And just like that, it occurred to me: I was so willing to invest in how I looked, and so hesitant to invest on how I felt.

Don't get me wrong: Underwear are just underwear. Wearing uncomfortable thongs and briefs and boy shorts a time or two a month didn't drastically affect any aspect of my existence. This was a tiny part of my life. But it was a tiny part of my life that was representative of a larger impulse to exist in my body and wardrobe and life without really thinking about it — to repeatedly dismiss my own discomfort and just keep on going, because what's the big deal?

It's the same rationale I have used a million times to stop myself from making bigger, scarier changes. Sure, maybe something wasn't exactly how I wanted it to be, maybe it made me uncomfortable, but what was the big deal? Maybe I wasn't ready to totally uproot my life in big ways, but I knew I could handle something as small as replacing too-tight skivvies, even if I thought I'd rather spend the money on something else.

So, for the first time ever, I cleaned out that bottom layer of my underwear drawer. Even though I did get rid of a few truly dreaded pairs I hated right away, I didn't immediately throw out every uncomfortable pair of underwear I owned. After that initial mini clean-out, whenever I wore a pair that I hated, I got rid of them right after. Whenever I would throw a pair out, I invested in a new pair that I actually liked wearing and I knew worked for me.

It may just be underwear, but every time I wear an old pair I hate (there are still a few left) and ultimately get rid of them, replacing them with something else, it's like a little reminder to myself that I am totally, 100 percent in control of how I feel.

We're taught that being intentional and thoughtful about life looks like meditation every morning or exercising every evening or writing daily affirmations and goals — and sometimes, it does. But more often (and more realistically), it's something much, much smaller. It's taking stock of what's working and what's not and realizing that if something doesn't feel good (even if it's something as small as underwear), you can change it — and you deserve to.