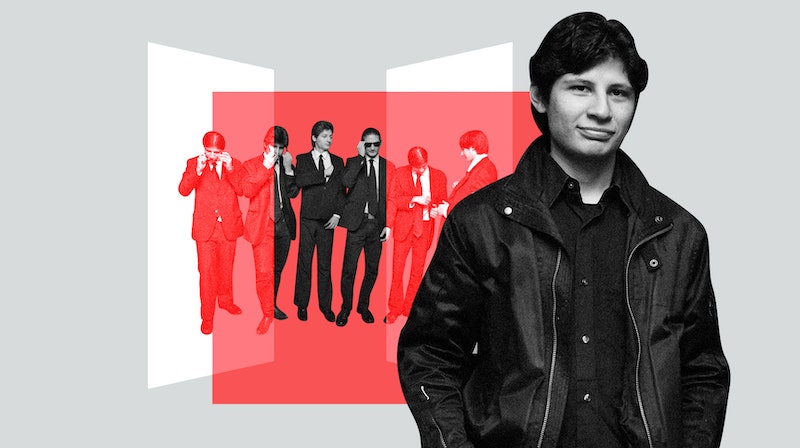 Margaret Flatley/Bustle
By Mukunda Angulo
May 1, 2020

Mukunda Angulo spent most of his childhood sequestered in a four-bedroom apartment on New York City's Lower East Side with his mother, sister, and five brothers. His father, fearful of the city's crime and obscenity, forbade them from freely venturing outside. As chronicled in the 2015 documentary The Wolfpack, movies became the siblings' window into the world around them; in watching and recreating scenes together, they forged a space for their imaginations to wander. At 15, Mukunda defied his father's orders and sneaked down to the street below, ultimately prompting his family's integration back into society. Now 25, Mukunda is living in Los Angeles and working as a freelance film and TV crew member. Here, Mukunda describes what it's been like to experience voluntary quarantine amid the coronavirus pandemic 10 years after he escaped forced isolation.

When I was first starting to venture outside [at 15], society didn't really make sense to me. Compared to what I'd seen in movies or on TV, everything was confusing and out of order. But for the first time, life feels like a movie right now. It's like Contagion; everyone has to follow the same rules to survive.

A lot of people have been acting like this is the end of the world, and I think one thing we've learned out of all of this is the power of fear. It seems like what people are scared of more than anything is money, which is not really something the human body needs to live. You just need food, shelter, and company. That's what sucks at a time like this, that even when the whole world has one common enemy — the coronavirus — money is still a big issue. Can you imagine if the end of the world did happen? Would we still use money, or would we say, you know what, this sh*t is just not worth it. Let's just help each other.

It's a scary time and it's a confusing time, but I've always thought the world is what you make it. One thing that's always helped me is creating. It's kind of a tricky thing, because I moved to Los Angeles in late February and I left all of my art supplies in New York. I don't have a TV yet either, and I refuse to watch new movies on my phone screen, so I've been writing down movie ideas and rewatching old films I love — The Dark Knight, Goodfellas, Casino, American Gangster. Films that really suck you in and make you forget that three hours have gone by.

I've also been trying to meditate twice a day, and I'd recommend that to anybody. Just find 20 minutes to allow yourself to hit a restart button or take in what's happening to you in the moment. It's very different than going on your phone and seeing what's happening in the world. You can just turn it off. I mean literally, turn off your phone.

My family and I say hi to each other now and then. We've all been through this before, so we don't feel the need to have long conversations about how we're feeling. I think a couple of my brothers are quarantining together. My mom and my sister are. I'm not in touch with my father.

A lot of people have been like, 'Oh, I guess you're kind of used to this.' But there's a huge difference between staying in a certain area for safety reasons and staying inside because you have no freedom. There's a difference between not having a choice and having a choice. I've been glad to see that there are hotlines and support groups being made available to people who are in abusive environments. In those situations, there's usually one dominant figure who feels like they're in control. What I hope people see through this experience is that those people are just as powerless as they are. They can't go anywhere or do anything they want. I hope this helps people to see through those cracks and to stand up.