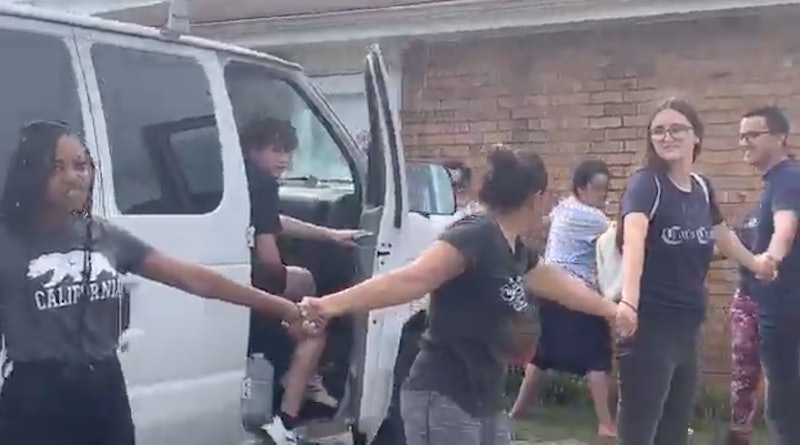 In this op-ed, Stacey Farley explains why she joined a human chain to stop ICE agents from getting to her undocumented neighbor and his son in Hermitage, Tennessee, on Monday.

About 8:15 in the morning, I came outside to smoke a cigarette and looked up at my neighbor’s house. Immigration and Customs Enforcement (ICE) had two vehicles parked, blocking him in. This gentleman and his son were in a van, going to work, and ICE had been on the other side of their house all night, watching for somebody to come out.

Metro Nashville police officers were there, but they were sitting in their vehicle. I walked up there and spoke with them. The officers told me what was going on, so I then went to an ICE agent and asked to see their identification and papers for why they were here. The agent had a badge, empty copy papers rolled up in their pocket, and a civil warrant signed by another ICE officer, not by a judge or anything. They didn't have proper paperwork to take the man by force.

The ICE agents were harassing my neighbors, offered them $5,000 cash, and told the little boy that they were going to arrest him. It was uncalled for. There's children involved, and when ICE comes, the agents don't just come after the person they're after, they take the whole household. It doesn't matter if you've got papers or not, all of you are going.

Tennessee published a flyer about what to do if ICE ever came to your door, and I went by that. I told the man inside not to get out of the vehicle at all. ICE didn't like me. I knew too much. They don't like people who come in there and know what they're talking about. The gas in my neighbor's vehicle was getting low, and as soon as we put gas in the vehicle, two minutes later, ICE was leaving.

There were probably 10-plus neighbors, and then more people showed up to help. They didn't have the right paperwork, so that made us be able to form a human chain to get them in the house without them being touched. [Editor's note: ICE says in a statement that “out of an abundance of caution for the safety of all persons involved, ICE personnel subsequently made the decision to depart without making an arrest to deescalate the situation.”] If ICE had the right paperwork, that human chain would have never stood up. They would've took that whole family.

We checked if the family needed anything, and 30 minutes later, we were performing another chain to get the family into a vehicle to be driven to safety. Their safety was our first concern. Any human that would have walked up on that scene and seen that little boy's face, they would have connected with the human chain.

Afterward, us neighbors hung out in the front yard, and we checked on other immigrants who lived in our area, too. Most of them are legal, and they won't even come outside. It's sad what it does to a community. I'm originally from Covington, Georgia, but I've been in Tennessee since 2008. I've lived in this neighborhood for two years. The family that this happened to has lived in this neighborhood for more than a decade.

You have a community here that, when we're out in our yard, our neighbors across the street are out in their yard. We share food. Our community is close. People often don't understand what other people go through in life. I raised my kids, and I started over again because I'm raising my grandson now. I want my grandson to live somewhere safe. I want to know my neighbor, and I want them to know me by my first name.

More like this
Footballer Jake Daniels Shared His Thoughts On A World Cup Boycott
By Sam Ramsden
Joe Lycett Just Took HIs David Beckham Qatar Protest To A Whole New Level
By Sophie McEvoy
Iran Has Issued A Death Sentence Over Mahsa Amini Protests
By Catharina Cheung, Darshita Goyal and Maxine Harrison
What To Know About Martin Bashir After Watching 'The Crown'
By Bustle UK
Get Even More From Bustle — Sign Up For The Newsletter