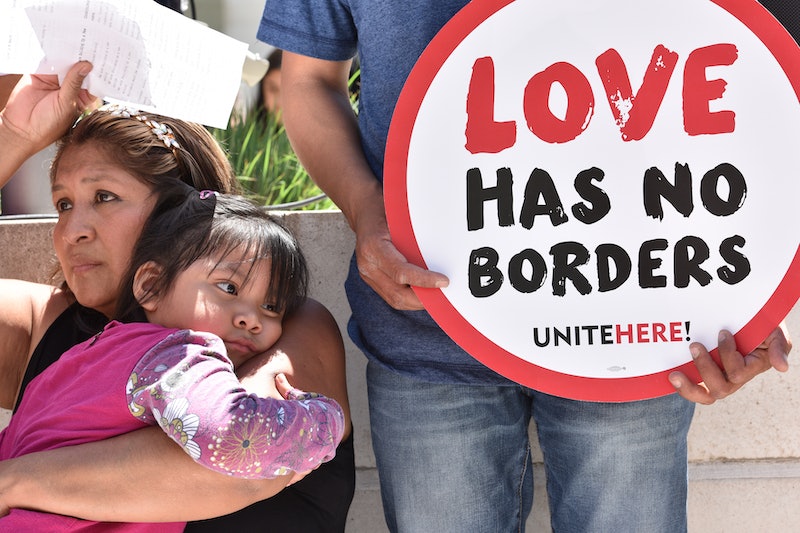 On Friday, Trump announced that the nationwide Immigration and Customs Enforcement raids he promised are scheduled to begin Sunday, telling reporters that "they're going to take people out and they're going to bring them back to their countries ... " According to CNN, the goal is to reportedly target at least 2,000 people with court orders of removal. Amidst these updates, the American Civil Liberties Union posted a list describing what to do if ICE comes to your door.

An immigration official told CNN that the raids are expected to happen in 10 major cities including Atlanta, Baltimore, Chicago, Denver, Houston, Los Angeles, Miami, New Orleans, New York, and San Francisco. Some of the cities reportedly being targeted are sanctuary cities, but ultimately, that status can't guarantee protection.

On Thursday, alongside other immigrant rights organizations, the ACLU filed a lawsuit against the Trump administration in an effort to stop the upcoming ICE raids. “The Trump Administration’s plan to arrest and deport thousands of Central American families and children without giving them a fair day in court is both illegal and immoral,” the ACLU of Southern California's Senior Counsel Ahilan Arulanantham said, according to the Washington Post. “More than one hundred years ago, the Supreme Court decided that immigrants could not be deported without due process." She argued that refugees deserve to be protected by the same rules.

In addition to filing the lawsuit prior to Sunday's raids being confirmed, the ACLU has also been working to ensure that the families ICE is targeting know what to do in that situation. Here's what the organization suggests: