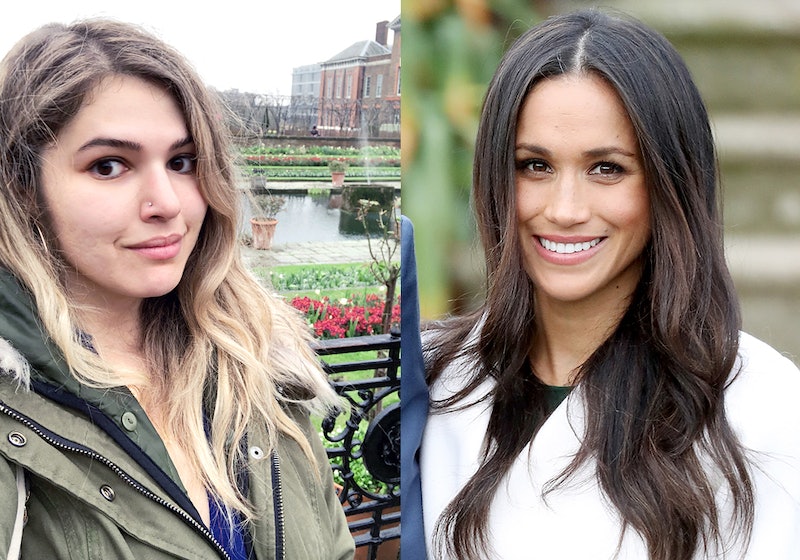 Meghan Markle's journey from Los Angeles to Kensington Palace isn't your typical royal origins story, and to me, that's what makes it so fascinating: anyone could be living like Meghan Markle without even knowing it. Markle came from an average, suburban neighborhood within the San Fernando Valley in Los Angeles, and had to work her way from non-speaking roles in TV shows to a leading role in Suits. Even her dating life feels oddly relatable; like so many people, she met her future husband, Prince Harry, after being set up with him on a blind date. They were literally making roast chicken, something most of us have done at one point or another, when they became engaged. Unlike so many royals who've come before her, Markle's story feels accessible; she could be any one of us.

Couple that realization with the fact that social media has made it easier than ever for fans of Markle's to learn everything about her, from what charities are most important to her to what she likes to eat for breakfast, and her life actually seems like something that's possible to emulate (even if the odds of actually marrying into the royal family are extremely small).

Markle is set to marry Prince Harry on May 19, 2018, and so in an effort to honor the future royal's upcoming nuptials, I took a few pages out of her figurative book, and traveled to the U.K. in order to really get a sense of what Markle's future royal life will feel like. With recommendations from London's official visitor's guide, VisitLondon.com, I lived a full day participating in activities inspired by Markle — and got a sense of exactly why the world is already so taken by this future royal.

I began my day not in London, but actually about 45 minutes outside of the city in Windsor. This town is, of course, the future site of Markle's wedding to Prince Harry — so, it seemed like a no-brainer that my first visit of the day would be to St. George's Chapel, where the wedding will be held, followed by Windsor Castle, where the reception will take place.

It didn't take long to find St. George's Chapel; the building is a striking love letter to gothic architecture, and impossible to miss. Unfortunately, the chapel was closed to the public, so I wasn't able to actually go inside; however, I did find out a massively interesting tidbit of history from accredited Windsor Castle tour guide Mike Armitage: The Royal Vault that houses the graves of many former rulers of England is just below St. George's Chapel, and includes the grave of King George III — aka, the last king to reign over the United States before it declared its independence. According to Armitage, when Markle walks down the aisle and stands at the altar of the church with Prince Harry, she'll actually be standing atop King George III's grave, meaning that she, an American, will be wed into the British royal family while standing atop the remains of the last king of the U.S. I wondered if that would count as her "something old."

Of course, I wasn't able to resist purchasing a branded bottle of water from Windsor Castle before I left. I mean, I imagine Markle will probably at least take a sip from a bottle of water that has the Windsor Castle logo on it at some point before or after the wedding is held there, so I kind of had to. She probably won't drink it with a Prince Harry bobblehead sitting on her desk in front of her, though. That's just me.

After heading back to London, I dropped my bags at The Kensington Hotel in South Kensington where I was staying, and set out to begin walking in Markle's literal footsteps. (Coincidentally, Kensington is also where Markle has been living with Harry since their engagement was announced.) According to Elle, Markle has been spotted at Whole Foods' Kensington High Street location, just a stone's throw away from the palace — and, apparently, she's fond of the açaì bowls there. Considering Markle has previously revealed during a collaboration with EyeSwoon that she loves berry açaì bowls, it seemed like a no-brainer to make Whole Foods my first stop of the day for an açai bowl.

At only £4.99, it wasn't as expensive as other things I'd bought for breakfast during my time in London, which was surprising to me because I figured that everything in Markle's life now — down to the food — would be inaccessibly expensive since she's becoming literal royalty. However, an açaì bowl from Whole Foods is totally something I could buy every day if I wanted to — and after one spoonful, I was fairly sure that I was going to start, because that thing was so good. Is this the secret to Markle's glowing skin? Is the lack of açaì bowls in my life the reason I'm not engaged to a prince too?!

I made a mental note to test that theory and eat more açaì bowls as I headed to my next stop.

Right across the street was the Kensington Flower Corner where, according to Elle, Markle often stops to purchase peonies for her abode at Nottingham Cottage. I surveyed the selection, wondering if I was standing in an exact spot Markle had in the past (or if Markle was actually nearby clad in one of her signature disguises she wears to avoid the paparazzi in London) — and I was probably staring at the flowers for an awful long time, because the florist actually left her position behind her counter to approach me and ask if I needed help. "Are you looking for something for your home? Your mother? A friend?" She asked.

She sweetly pointed out a few options before I bid her goodbye in an effort to get to my next stop: Kensington Palace. Just down the street, this massive property is home not only to the grounds that Nottingham Cottage is on, but it's also the site of some of the most iconic photos taken of Markle and Harry: Their engagement announcement photos were taken at the palace garden's Sunken Gardens.

Though it wasn't possible to actually stroll around the Sunken Gardens as Markle and Harry did while the photos were being taken, I was able to snap a quick selfie in front of them, which I'm sure Markle would have done if she wasn't so busy being photographed by professional photographers and introducing herself as a future duchess. So, you know, close enough.

Although that açaì bowl from Whole Foods did keep me full for a good few hours, I was starting to get hungry again by the afternoon. But, I couldn't eat just any lunch — it had to be a lunch fit for royalty. So, without further ado, I headed to Violet in London's Hackney borough, also known as the brick and mortar location of the cake company owned by the baker Claire Ptak, who will be making Markle and Prince Harry's organic lemon and elderflower wedding cake.

As could be expected, the shop was bustling with customers, so I took the extra time I spent waiting in line to look over the spread of baked goods behind the counter. Though there was an impressive line-up of beautiful cakes, I eventually opted for an almond polenta muffin topped with candied rhubarb. It was delicious, so that decision is not one I regret at all.

Of course, no royal lunch would be complete without some protein — and that protein had to be cheese. Royal cheese. Enter: Paxton & Whitfield. As Britain's oldest cheese shop, it currently holds royal warrants from both Queen Elizabeth II, and HRH Charles, The Prince of Wales — and even cooler, they supplied goat cheese for Prince William and Kate Middleton's wedding in 2011. So, you know, the place is pretty royal!

I met with Paxton & Whitfield cheesemonger Dan Bliss, who walked me through a tasting of classic English cheeses, including the store's Stilton, which is what it's famous for, as well as the actual goat cheese served at William and Kate's wedding, the Aldwych goat cheese.

The store held a massive selection, and I imagine it's one that Markle herself will be becoming accustomed to as she joins the royal family and sets up her life in London — the cheese shop is somewhat of an institution in the U.K., and as royal warrant holders, it supplies cheese to the royal family. Is Markle more of a goat cheese or cow's milk cheese person, though?

Toward the evening, I headed back over to my hotel, The Kensington, to check out my room for the first time since I'd arrived in London earlier in the day. To say the room was fit for a royal would be an understatement; not only was its location at the corner of Queen's Gate Road — just down the street from Kensington Palace — but the room looked like it could be a small guest room within the palace thanks to its antique-inspired furniture, claw-foot tub, and lush queen-sized bed.

Look, I know that royals obviously live a life of luxury thanks to their status as, y'know, royals, but I honestly was not sure I'd be able to go back to sleeping in a full-sized bed in my sixth floor walk-up apartment in NYC after spending a night in this room.

As the sun began to set over London, I found myself strolling alongside the Thames River near my hotel in Kensington, refilled Windsor Castle bottle of water in hand (Markle seems like the type to stay hydrated). As someone who is also a Los Angeles transplant, it was impossible to deny that London, with its history, culture, and smooth goat cheese, was hugely different to sunny, laidback, earthquake-proof Southern California. But after spending the day engaging in some of her favorite activities, it was easy to see why Markle already loved London so much: Even by just visiting the future site of her wedding and visiting her favorite locales, I found it clear just how unique and special her life in the city with Prince Harry is going to be.

But perhaps even more striking is the fact that Markle's favorite activities — grabbing an açaì bowl at Whole Foods, buying flowers from a corner market stand — were all things that tons of Londoners do every day. It's easy to see why the city — as well as the world — is already so taken by her: She lives a genuine, accessible, relaxed life. Even as an almost-royal, she shops at a location of the same grocery store I do in NYC. I like to think that, as she becomes an official royal, her relatable life — açaì bowls and all — will remain a mainstay.

More like this
Stormzy Defends Meghan Markle In Passionate New Song "Please"
By El Hunt
Meghan Markle Shared The Advice A “Very Influential” Woman Gave Her Pre-Wedding
By Sam Ramsden
Emily Ratajkowski & Pete Davidson's Astrological Compatibility, Revealed
By Nina Kahn
Dorinda Medley Has Holiday Hosting Down To A Science
By Brittany Leitner
Get Even More From Bustle — Sign Up For The Newsletter