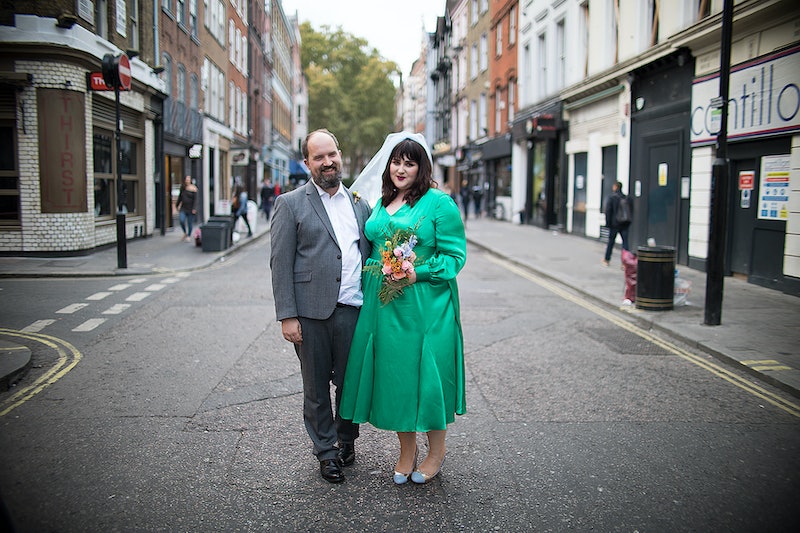 People seemed pretty surprised by how laid back I was with my wedding plans. But it was designed that way: to be kept small and compatible with my busy life and my preference for intimacy over big events. I was flexible about a lot of things: the menu, the flowers, whether or not my husband had a ring. But the one thing I knew had to turn out absolutely perfectly was The Dress. This desire was multi-layered. Part of it came from the fact that I am obsessed with clothes, and part of it was that I am known for loving fashion, working in fashion, and editing a whole book on fashion. This meant that even a year ahead of the wedding, people were telling me they couldn't wait to see my dress. The heat was on.

To add to the potential pressure of the process, I really didn't have a clear idea of what I wanted. I had a few ideas swirling around in my head, but they were all so different and ranged from a traditional white gown to a leopard print jumpsuit. What I knew for certain, though, was that I didn't want to set foot in a bridal shop. Even though I hadn't been married before, I wasn't naive to the ways of most bridal stores: I knew that most had a tiny number of samples of each dress in stock to be tried on and fixed in place with heavy-duty clips attached to your bra or some similar situation. I knew that even thin brides-to-be probably wouldn't get to try on the dress they would commit to in their exact size. But being plus size meant the chances of there even being dresses available to buy in my size in a traditional bridal shop, let alone try on, were not good.

What I knew for certain, though, was that I didn't want to set foot in a bridal shop

After talking to various people and spending some quality time on Pinterest looking for inspiration, I finally had a very clear vision of what I wanted to wear on my wedding day. But the odds of me finding a jewel green satin midi dress with a 1930s-style bodice and shoulder pads... in a U.S. size 20? The outlook was gloomy on the ready-to-wear front. So, proactive as I am, I went through my mental Rolodex of people who could potentially turn this vision into a reality, and realized that I might know just the person. I was lucky that Sara Brown, who's now freelance but was then an in-house designer at a big fashion brand, agreed to take on my project straight away even though she wasn’t normally taking on custom gown commissions at the time.

Brown took many measurements of my body a few months out from the wedding day. I showed her lots of photos, she showed me lots of fabric swatches, and we had a couple of fittings to make sure everything was moving in the right direction. Finally, eight months after initially contacting Brown, we had the dress I had envisioned. Not something close to what I wanted. Not an approximation of what I wanted. It was the dress. It was the exact color (no easy feat in itself), the exact length, the exact sleeve, with the exact buttons I had dreamt of, and it fit perfectly.

For Sara Brown’s time, the material and the cost of having it manufactured by someone she’s worked with in the past (She was very upfront about that fact that if we outsourced the actual sewing of the dress to someone else, it would be finished to a higher standard than if she made the dress herself) plus a tip, I paid a little more than $770. Obviously, the cost of a custom dress depends a lot on the designer you work with and the kinds of materials you choose. But many of the brides I talked to who had custom gowns noted that it wound up being cheaper to create their own dress than to buy from a store. I was similarly surprised by how relatively inexpensive my dress was, especially when you consider that the average cost of a wedding dress in the U.S. is more than $2,000.

Madison Hunnicutt, who's 26 and from Texas, had a custom-made dress that ended up costing around one-tenth of the price of the dresses she had loved in boutiques and on designer websites. She used direct-to-consumer, custom dress company Anomalie to create her dream dress after going to more than six different bridal boutiques. In the last — which turned out to be the final straw — Hunnicutt was told she could just "put her arms in the dress" to see what it looked like, as there was no way of trying on a dress that fit her plus size body. Hunnicutt found Anomalie via an online ad and says her wedding dress experience started to improve instantly.

“[Anomalie created] a custom sketch of my dress vision, which continued to evolve over time," Hunnicutt explains. "I was sent fabric and beading samples right to my front door. I got to have my measurements taken by a trusted seamstress of my choosing." And choosing to custom-make her wedding dress meant she could go from a space where literally nothing fit her to having complete creative control.

After designing a custom dress myself, I found that one of the most important things is to work with a designer who respects your ideas in relation to the body you have. If you have a clear idea of what you want, the person you're working with should be able to faithfully reproduce that, rather than imposing their view of how to dress a fat body, or more specifically, how to “flatter” it. This was one of the reasons I loved collaborating with Sara on my dress: not just because she's a plus size woman herself, but because she's a plus size woman who respects fat bodies in the same way that I do.

If you have a clear idea of what you want, the person you're working with should be able to faithfully reproduce that, rather than imposing their view of how to dress a fat body, or more specifically, how to “flatter” it.

“As a bride-to-be myself, I know how hard it is to find what you want, especially as a plus size bride,” Brown says. “I absolutely loved seeing all the love the dress got on the day! Since working on this dress, I have been contacted by other plus size brides looking for help to create their perfect dress, as it’s clear there is a massive gap in the market.”

I talked to other plus size brides to get a feeling for why they had also made the decision to have their dress custom made, and the single most common answer was because they didn't feel comfortable in bridal shops. Being able to circumvent the often profoundly humiliating experience of going to a traditional wedding dress store is, for many women, priceless.

Sophie Brown is 39 and from Reading, UK, and ended up designing her own dress after one such experience in a brick-and-mortar store. “I traveled to London to try on my dream dress. I was outside the shop before it opened because I was so excited," Sophie says. "When I tried on the dress in the store, it didn't fit me. It looked so beautiful from the front, but I knew it wasn't done up at the back."

Initially, Sophie’s plan was to lose weight to fit into this dream dress which only went up to a US size 20, because she knew there weren't many other options, but after a mutual friend put her in touch with a designer, she realized this wasn't the only choice. “[The designer] looked at the dress I liked and I told her all the things I would want to change about it if I could, and she said she could make it for me. We chose the fabrics together and it was lovely to be able to choose the exact lace and satin and ribbon to go around my waist, even adding a bow at the back. Because I didn't fit into what I thought was my dream dress, I ended up getting my actual dream dress.”

Because I didn't fit into what I thought was my dream dress, I ended up getting my actual dream dress

Depending on how you look at it, the moral of the story is either that custom-designing your wedding dress is the way forward, or that bridal boutiques seriously need to step up when serving plus size customers. Although everyone I spoke to had amazing experiences designing their wedding dresses, the fact remains that most of us felt like it was the only option. Plus size fashion is a rapidly changing and improving industry, and it's high time the bridal sector evolved along with it.

Interested in your own custom wedding dress? Check out brands like Fame and Partners, Anomalie, or Lace & Liberty.