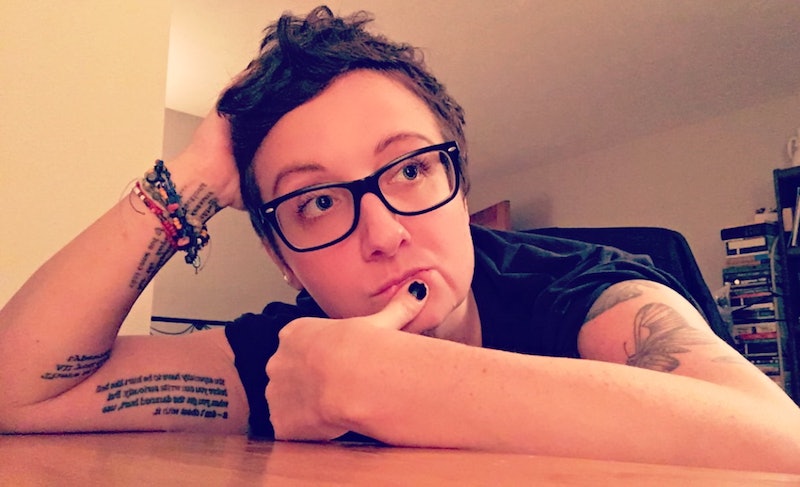 Z* and I were standing on top of the Spanish Steps in Rome when he told me about Ana*. He had mentioned her briefly before: a woman he had met not long before that day in November and dated casually; a woman who, as he told me, was someone on par with the Wicked Witch of the East. So much so, he said, he had to end it and had to lie to her about coming to Rome with me. Basically, from the picture he painted, Ana was terrifying, and I found myself not just hating her on his behalf, but hating her for myself, too.

In July of 2018, I accidentally got pregnant, and saw a side of Z that I'd tried so hard to ignore — the side that had shown itself when he'd tried to drive a wedge between Ana and me. When I miscarried and he blocked me from his life within just a few hours afterward, it was Ana I thought of: He must be back with her, she must have answers, or she knows what’s going on.

Ana was someone who, under different circumstances, would have been my friend.

To say I was desperate for answers is an understatement. It was in this desperation that I had one of my friends reach out to Ana. Surely, she'd know why Z had done what he'd done. Hell, she was probably in bed with him at that very moment my friend messaged her. How completely wrong we were. Instead of callously dismissing the message, her main concern was how I was doing and how I was feeling after miscarrying. It wasn't an obligatory condolence, the kind you offer when you've heard bad news about someone, but a genuine inquiry into my physical, mental, and emotional state.

Ana wasn’t the heartless, conniving, manipulator Z had depicted. She was a compassionate, understanding woman who, like me, had been screwed over by Z. Ana, the woman whom I thought was my competition, was actually someone with whom I had more than a few commonalities; she was someone who, under different circumstances, would have been my friend.

I have spent too much of my life disliking women whom I saw as my competition.

Once I pulled myself out of bed, wiped the tears from my eyes, and started emailing Ana myself, so much about my relationship with Z made sense. As Ana and I compared stories and matched up things on a timeline of events, it all became clear: contrary to what Z had told me, I had been the other woman for months the fall of 2017, and Ana was the girlfriend. Everything I thought I knew had been thrown out of whack. My anger and disappointment in Z was no longer, "how dare Z do what he did to me," but "how dare he do what he did to Ana and me?"

As I tried to recover from what Z had done, I turned to Ana the most. While my friends were all there for me, Ana had been through her own history with Z, and had come through the other side. She had healed and moved on, while I was just in the beginning stages of it. It was in turning to Ana that I realized she was not my competition, nor was she ever my competition. She was never my enemy, she was never out to get me, and she wasn't someone who, despite what Z had wanted me to believe, was wickedly cackling while waiting for me to fall on my face. She was my sister, and she gave me courage and strength when I needed it most.

It didn't take long before we started to talk about things that had nothing to do with our mutual ex; in other words, we were becoming real friends. Here was this fierce, badass feminist who, as fate would have it, came into my life because of some guy who was dumb enough to try to pit us against each other — while also being dumb enough to sleep with both of us at the same time. The more I got to know Ana and our friendship blossomed, Z became a blip on the radar of our past. It was no longer about him; it was about us and the bond we created. It was also then that the part of me I always labeled the “bad feminist” — the part that of me that couldn't reconcile itself when it came to seeing certain women as my competition — disappeared.

I have spent too much of my life disliking women whom I saw as my competition. It was as though it had been ingrained in me to hate first, then, if I was won over by the woman in question, love them later. The majority of my closest female friends are women that I initially didn’t like. Why? Because I feared they’d take something from me.

But in every one of those cases those women, the ones I easily dismissed upon first meeting them, didn't just become my friends, but gave me light, love, and laughter. Through these friendships, I learned that it’s not women versus women; it’s women against the patriarchy as we strive for equality. It’s not more complicated than that. I just can't believe it took me so long to finally see it; like, really see it and embrace it with everything I have. Opening my heart to Ana was, in so many ways, a turning point for me.

I also know that when I see Ana in person this spring, we'll meet up as friends — and I'll get the closure I need from all this. It won't be just turning a page unto another chapter, but opening a brand new book and I’ll be stronger for it. Because that's just what happens when women come together, put each other first, and have each other's backs: we move mountains, the patriarchy trembles, and our strength is boundless.

More like this
How To Politely Reject Someone Who Keeps Asking You Out
By Laken Howard and Lexi Inks
Think Your Partner Is Cheating? These Tarot Cards May Confirm Your Suspicions
By Kristine Fellizar
The 19 Best Tweets & Memes About Bisexual Awareness Week
By Lexi Inks
Why A Libra & Libra Couple Might Become Codependent
By Kristine Fellizar
Get Even More From Bustle — Sign Up For The Newsletter