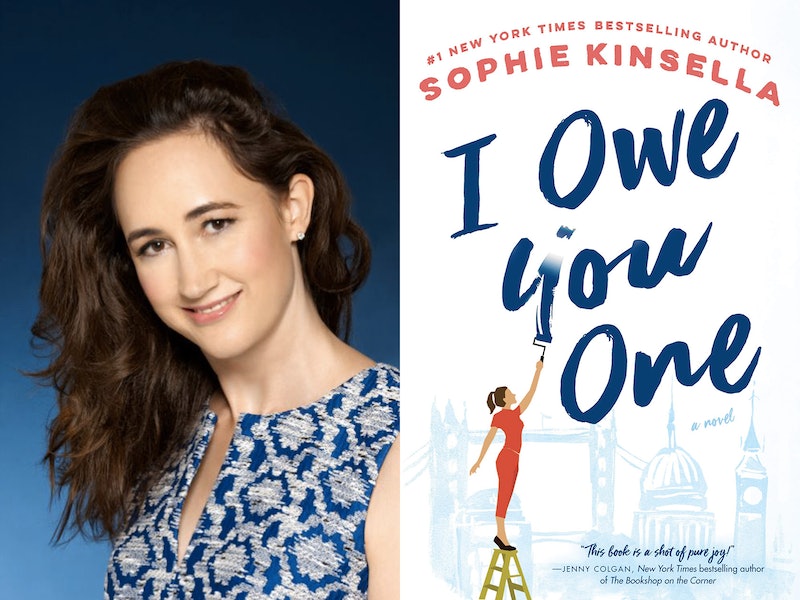 Author Sophie Kinsella is nothing like the rom-com heroines she's been writing for the past decade and a half. For one, she's early to our interview, not 45 minutes late, running through the streets of New York with a broken stiletto, makeup sweating down her face, her skirt accidentally tucked into her stockings. She's dressed fabulously, but I'm pretty sure her outfit wasn't stolen from a roommate's closet. Not once in the entire hour we're together does she feign fluency in a foreign language or claim to have a recently-deceased great aunt Ermintrude. But perhaps this isn't exactly a fair assessment. Sure, Kinsella seems way more put together than her heroines, but she's just as captivating as they are, too.

Kinsella is warm and witty, and she speaks in the English accent I imagine all of her characters share, from Becky Bloomwood to Emma Corrigan. It's for the latter heroine that Kinsella is in New York, late in 2018, to visit the set of Can You Keep A Secret? The book, which is Kinsella's second to be adapted to the big screen, follows Emma after she spills all of her secrets to a handsome stranger on a plane... who turns out to be Jack Harper, the elusive CEO of the company where she works.

"I have to say I did always think that it would be good on screen because when I wrote it it was as if I was seeing a movie play in my head," Kinsella tells Bustle. "Which is true to a degree with all of my books. I think I see the world kind of quite cinematically. But this one in particular is just so much about the comedy, which I thought would be great on screen. I just love the couple of Jack and Emma, you know. I'm slightly in love with them."

"I think I see the world kind of quite cinematically."

At the time of our interview, the author was months away from publishing her 17th adult romance novel (she has nine additional romance books published under her real name, Madeleine Wickham), I Owe You One, out now. It's the most recent entry in a prolific career that has put exploration of the passions and pitfalls of modern romance front and center.

"In terms of romance, I can’t think of a bigger topic, really," Kinsella says. "A more universal topic, and topic that will never die. Men and women and men and men and women and women and all varieties of people will meet and make connections and form partnerships and run into problems and have uncertainties and misunderstandings. And it’s just a gripping subject that I don’t think you can sort of explore it once and then think ‘Well, I’ve done that. I’ve figured it out!’ I don’t think that topic ever gets stale."

'I Owe You One' by Sophie Kinsella
Amazon

I Owe You One follows Fixie Farr, a young woman whose nickname says it all: She has a compulsion to fix things. Since her father's death, she's been picking up all the slack at the family store in a desperate attempt to take care of her father's legacy instead of striking out on her own. When a handsome stranger in a coffee shop asks her to watch his laptop for a moment, Fixie not only agrees — she ends up saving it from certain disaster. To thank Fixie, Sebastian scribbles an "IOU" on a coffee sleeve, locking them in a back-and-forth of favors that leads Fixie to decide what, and who, she wants, once and for all.

While romance is still a major thread throughout the novel, Kinsella has used her latest to expand on more than just a love story between one woman and one man — here we see themes of legacy, of self-love, and we follow a whole cast of characters who all must grapple with two huge questions: What do we owe the people in our lives, and what do we owe ourselves?

"I really did want to take this concept and explore it and nail it as best I could," Kinsella says. "For the longest time, I had the idea of two strangers who were connected by doing a favor. But at the same time you’ve got this wider family and it led me to think, what do we owe our family? And how should we love the people in our life, and what does that mean? I just found it richer and richer as a topic, and I pulled everybody into the same theme and right through to the last scene it just felt very much like this cohesive thing."

Fixie grapples with a brother who belittles her, a sister who ignores her, and a high school crush who uses her; there are moments of raw grief, delusional infatuation, unhealthy ambition, and a pretense of selflessness that puts Fixie's entire life in jeopardy. This is, without a doubt, Kinsella's most ambitious book yet.

"I would never write a book without trying to enrich it with my character’s family background. I think it’s utterly vital to the stories that I tell," Kinsella says. "Where we come from is really important and our families and our wider circle [forms] the person that we are as much as anything else. [Fixie] doing everything for everybody else and not challenging [others'] behavior — I had to kind of dig in there and it needed to have that deeper, almost darker, quality to be satisfying. I’m trying to tell stories that [are] about the entirety of a character. I always set up a flawed heroine who has something just out of kilter in her life and try to solve her problems with her, and for her."

While I Owe You One might be Kinsella's darkest and most dramatic book to date, don't worry: it is still a rom-com, with all the laugh-out-loud moments you've come to expect from the author and her beloved heroines.

"I always set up a flawed heroine who has something just out of kilter in her life and try to solve her problems with her, and for her."

"I just can’t help myself. I just have to write funny," Kinsella says. "Probably some of the stories that I’ve written, I could have told in a completely straight and dramatic way. But I want people to laugh! I see the ridiculous in situations and I want to write that down. You know, I am the person who is always making the flippant comment and seeing the absurdities of human kind and that entertains me because I just love human foibles, they’re like my hobby. Laughter for me, is the ultimate tension release. I think that comedy should be prescribed by doctors, I really do."

More than anything, Kinsella's long career in the rom-com is indicative of the kind of stories she truly wants to put out into the world: those that feature people like you, like your mom, like your best friend, flawed heroines who make the best out of the wild and wacky journeys we all go through — at work, with our families, in love and in life.

"There’s something so satisfying about a book where everything works out, Kinsella says. "What I try to do is to create another world where people are funny and warm and you want to hang out with them and things go in a good direction. And yes, there are ups and downs and dramas, but you know that people are going to end up broadly in a good place. And you’ll be satisfied with how they got there. And if [you] can feel good at the end of it? Then that’s kind of a double whammy."