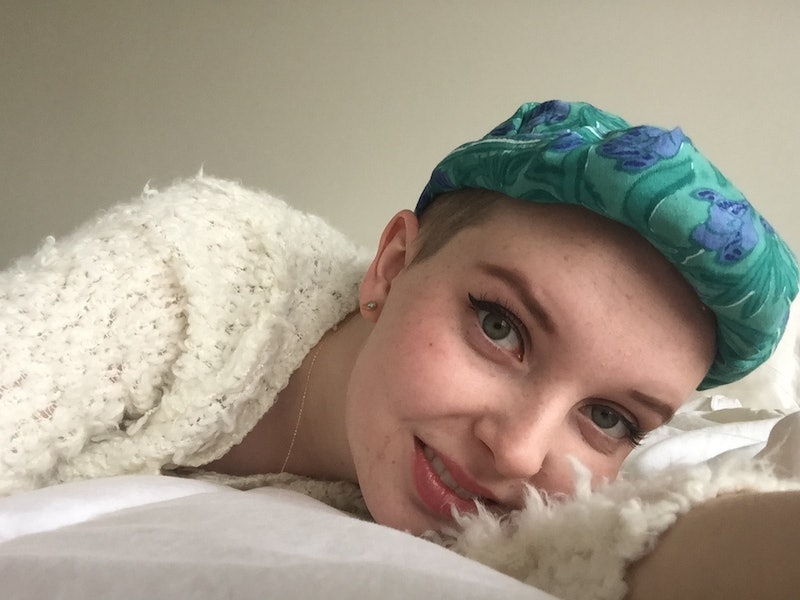 I'm sitting somewhere I've been countless times before: on an exam table, getting my lymph nodes checked. I know the feeling of cool doctor's gloves on the places that I once feared. I anticipate the pressure on the scarred spot where two lymph nodes first told me I was sick. But this time is different. I'm with my primary care physician, not my oncologist. And I'm in a little exam room in an office park, not a cancer hospital. Finishing her exam, and dropping the blue powdered gloves into the trash, my doctor smiles and tells me something I'm not used to hearing: I'm healthy.

It wasn't that long ago — December 2014 — that I was asleep on an operating table as two golf ball-sized lumps in my neck were removed to be tested for cancer. I was a week from a call that would change my life, where I first heard the words Hodgkin's Lymphoma in reference to my body, and — although I recognized the term from watching too much House in high school — asked "is it malignant?"

The doctor's response — "yes" — catapulted me 3,000 miles back home to Boston from college in Los Angeles, and moved me in slow motion for six months, as I broke free from a disease that, just over 30 years ago, would have been a death sentence.

To be fair, despite being called "healthy" now, cancer isn't something that I'll ever really be free from. I went to get a hair cut recently — a milestone because I'm no longer growing it out. When the hairdresser handed me the smock, I put it on backwards. A few people giggled as I stood there stumbling to put it on correctly. As I readjusted, I realized my silly mistake had a darker undertone — I've been to way more doctors than hair salons.

It became apparent for me that for the first time, the gap between the everyday mental reminders of my illness and the physical reminders of my symptoms is becoming wider. I still think about it, but don't feel it as much. And although a lot of the time I say "don't worry, I'm healthy!" as a defense mechanism when someone finds out I had cancer, I'm not actually lying anymore.

Of course, I don't have the baseline version of "healthy" that others do. And while most people end up cringing when I joke that I'm "sickly," there's truth to it. I had Hodgkin's Lymphoma at 19, after going undiagnosed and living with a compromised immune system for two years. I went through six months of brutal chemotherapy, and an admittedly continuing battle for my mental health afterwards.

"Am I still in remission?" "Are my side effects controlled?" "Is my endometriosis manageable?" "Are my medications correct?" and "Do I feel strong?" [...] the more of these questions I can answer "yes" to, the healthier I can feel.

Before and after chemotherapy, I faced chronic illness, and in some ways it got worse once treatment was over. I have temporal lobe auras, a form of epilepsy that feels like panic attacks when falling asleep, which only got diagnosed after chemo. I also have endometriosis that got worse after chemo — gynecologists tried to rebalance my hormones after I received hormone suppression to preserve my fertility during treatment, but not without side effects. Chemo damaged my lungs; I can't be in a room with smoke because I'm not sure how close to collapsing my lungs will be at any point. My heart is weaker than others, too, so exercise takes on a whole other dimension. All of this is permanent — I can do cardio, and work on lung capacity, but I will never get back to what I was before chemotherapy. My remission is also based on my cancer being "untraceable," not erased in any way that can be proven.

Despite most of these issues improving, I’m not yet, statistically, a cancer survivor. That numerical honor happens when you’ve lived five years after the cancer went undetected in your body. I’m at almost four. And while my cancer was never particularly life-threatening (not insignificantly due to financial, geographical, and medical privilege, among other things), it has threatened my stasis of "health" from age 19 onwards.

Because of that, I've chosen to define "health" for myself, and that consists of a series of questions I ask to figure out where I am on the path to my version of "healthy." These questions are: "Am I still in remission?" "Are my side effects controlled?" "Is my endometriosis manageable?" "Are my medications correct?" and "Do I feel strong?" I feel marginally "healthy" when I can say "yes" to at least one of these questions — and the more of these questions I can answer "yes" to, the healthier I can feel.

When thinking of my first question, I'm reminded that maintaining my remission is mostly out of my control. I still feel grateful (and perhaps proud) to wake up cancer-free every day, but with my treatment regimen, there's really no way of knowing. I hope that the cancer stays untraceable forever, but doctors no longer recommend scans because of the risks of radiation. So, in absence of concrete evidence, I find ways to not fear the potential moment when my symptoms return. But this is a complicated state of mind, and I've fought through it with therapy, the utmost faith in my doctors, and making the decision to believe it will not come back. And as long as I'm in remission, I feel a certain level of "healthy."

Controlling my side effects has been a tougher challenge — which can make finding a baseline "healthy" more difficult. Since Hodgkin's Lymphoma was one of the first cancers to be "cured," it's treatment regimen is now one of the oldest. So although major risks — like other cancers or serious organ damage — aren't common, the particular cocktail of chemo drugs I was on can cause infertility in children and young adults. My doctor says now my fertility is likely OK, and my lungs healed themselves to an extent that I didn't need steroids. My chemo brain, a particularly awful side effect of treatment that caused cognitive impairment and affected my ability to be a student, went away in 2016. The daily reminder that I had to make the awful choice so many of us do — to poison ourselves to survive — no longer carries as much weight. So I can say "yes," my side effects are controlled as much as they can be. My "healthy," here, has finally been attained.

My third question — "is my endometriosis managed?"— exists hand-in-hand with all of my other health issues. Managing endometriosis is a constant battle on its own. My particular struggle with the disease goes back to high school and it continued even though Lupron shots took away my periods. It worsened as two gynecologists prescribed me forms of birth control that only made the bleeding and pain worse — in reaction to their misconceptions about what post-treatment reproductive health should like. I don't know if this is a common practice, but there definitely is a feeling among young adults with cancer that our fertility issues are neglected and, at best, misunderstood. Four years of self-advocacy has led me to more trustworthy doctors, and trustworthy treatment. My endometriosis is manageable right now — and that's an important ingredient in my feeling "healthy:" both as a medical health status and change in perspective.

[M]y measurement of strength still lies between "resilient" and "unstoppable." Wherever I find myself on this spectrum, I consider my strength a big part of achieving "healthy."

Getting my medications correct is another obstacle to my definition of health — it has been a challenge since day one of being sick. Side effects to one necessary medication made another necessary, and the side effects to those need treatment as well. At points, I became completely unaware if I was treating any real symptoms or if I was simply bandaging a series of side effects for no reason at all. When I know I'm managing my endometriosis, and on the right antidepressants, I still need to make sure those treatments aren't negatively affecting the other issues I have to keep an eye on. So, right now, since I quite like my particular cocktail of meds, I consider myself "healthy."

The last question is whether, at any given moment, I feel strong. It's harder to answer, but it's my most comforting unit of measurement. Since my body is home to so much unpredictability, the one sensation I truly understand — and trust — is my strength. When I don't feel physically strong, it could be because my endometriosis is giving me pain so bad I throw up, or because my depression is putting a weighted blanket on my muscles so heavy that I can't get out of bed. But even when I'm being worn down by various physical and mental betrayals, my measurement of strength still lies between "resilient" and "unstoppable." Wherever I find myself on this spectrum, I consider my strength a big part of achieving "healthy."

So I ask myself again: "Am I still in remission?" "Are my side effects controlled?" "Is my endometriosis manageable?" "Are my medications correct?" and "Do I feel strong?" For the first time in four years, I can answer "yes" to all five of these questions. To me, that's reason to celebrate my personal form of "healthy."

This definition may change over the years, and I hope it does. I hope my next stage of "healthy" is about being a five-plus-year survivor, being actively recovering (and one day fully recovered) from my mental illnesses, and adding a question after "do I feel strong?" that asks "do I feel happy?"

For now, though I can rejoice in saying "yes" to my five questions. This is a milestone I haven't met before, and something that some people never have the privilege of meeting.

I struggle with what it means to identify as chronically ill — and be part of the community around chronic illness — while having all of my conditions managed. But when I look at the big picture, and remember how kind and understanding others who've been through pain and trauma are, I know that I am allowed to feel good. I can identify as chronically ill, and be my own version of "healthy." This "healthy" isn't quite what others experience, but it's surprisingly close.