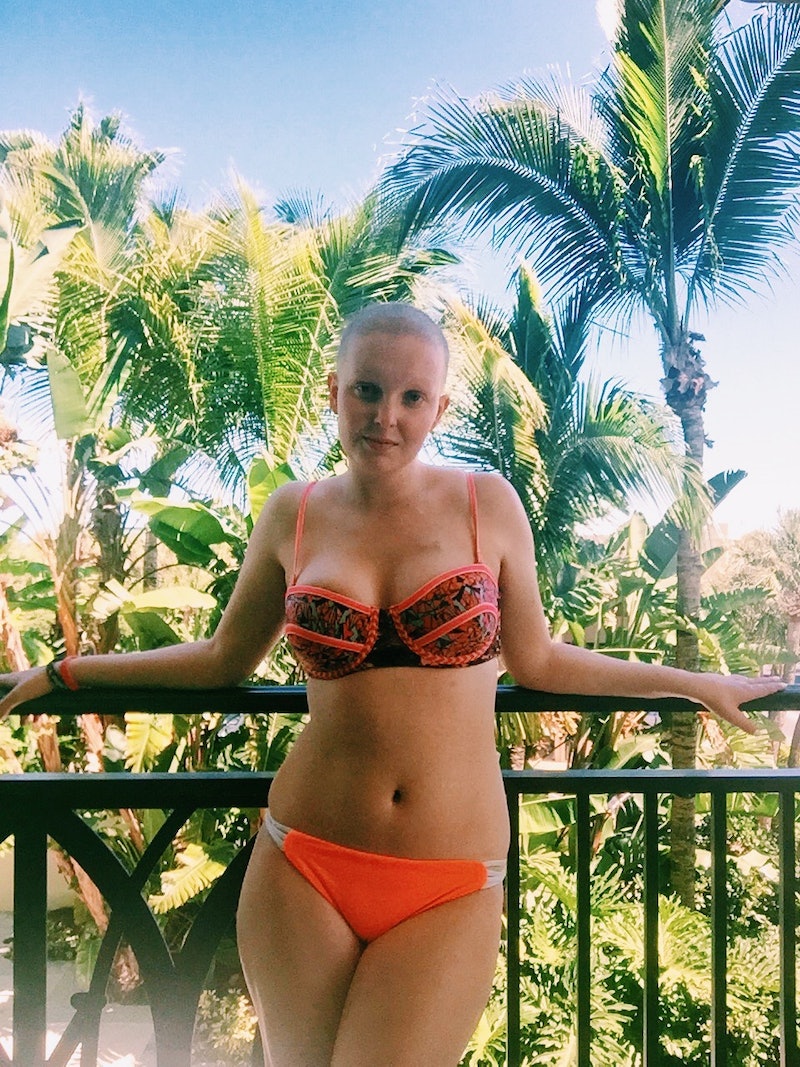 It doesn't feel like anything remarkable to go home with someone for the first time post-cancer. In the moment it's all about breath and touch, and my memory of sickness is far away. My body still has shadows of being ravaged by illness, but Josh* traces his unknowing fingers along my skin in a way that reminds me how powerful sharing a moment of softness can be. I'm excited by this new person who likes my short hair and my big thighs. When he throws me on his bed, and starts kissing me from my lips downward, I finally feel a sense of recklessness that I've been craving since I was told I could die at 19. But, as he reaches my chest, I hit the first major roadblock of having sex for the first time post-cancer. He bites my port scar. And I scream in pain.

Right then I learned, while in a new guy's bed, clutching my chest, trying not to cry, that I wasn't going to be able to separate my current desire for sex from my recent past as a cancer survivor. And as he listened when I explained my story, I could feel the energy between us slow down — it was then that I felt completely and utterly naked.

I was 19 when I found out I had Hodgkin's Lymphoma, diagnosed at an early stage, but unfavorable. The cancer was in my blood, attacking my immune system. As a college sophomore, chemo was my only option to have a future.

I now consider the port scar on my chest a personal mark of resilience. The scar itself sits right above my heart, a one-inch reminder of the life-saving chemotherapy it helped deliver without my young veins collapsing. After treatment, the scar became like a third party in the bedroom. Just above my left breast, this little red spot is a glaring symbol of my tightrope walk between chronic illness and my own sexuality. It's inescapable, awkward, and empowering.

Just last month, my scar came up when I was getting dressed after hooking up with someone new. I was going out with friends afterwards, and threw on a crop top. "Wait," he said, gesturing to my chest. "Is that what you're wearing?" His eyes were glued to where my port used to be.

Realizing it wasn't a hickey, he tried to figure out what could have caused this precise little cut near my heart. "From what?" he asked.

"I had cancer," I explained.

The 30 seconds that usually come next, I can replay in my head like a tape. It happens so often. He asks when, I say three years ago. He asks what, I say blood cancer. I tell him I'm OK. I make a joke about once being bald. He says he's glad. We kiss. Sometimes, I'm asked what treatment was like. When just a few minutes ago, I felt completely free, this conversation always pulls me right back down to earth.

"Does it hurt?" another guy said, running his fingers over the smooth scar tissue. I shook my head. "It looks like a bar code." That was a new one.

I have been close-to-dead, but I also love to feel alive. I don't think I'd be able to release myself to pleasure if I didn't admit that some of this drive comes from knowing absolute pain.

I've heard it again, and again, with romantic and sexual partners. Nobody's used to meeting a young person who's had cancer. Of course, there's no rule book that tells me I have to "come out" as a cancer survivor to a new partner. But, underneath the desperate want to be present in pleasure and not bring up my past, I realized I need to open up for one simple reason — I don't think I could enjoy sex if I didn't.

I have been close-to-dead, but I also love to feel alive. I don't think I'd be able to release myself to pleasure if I didn't admit that some of this drive comes from knowing absolute pain. My body tried to kill me before I even got to my first high school reunion. Since then, I've been working hard to get back control. One of my old partners called me "voracious." I'll admit it — sex is a place where I can actually let go. It's a time where my body isn't the enemy.

Learning to differentiate the disease I had from the body I live in took time. Rediscovering my sexuality after chemo was terrifying. During my first six months after treatment, I punished myself with an eating disorder. I threw up everything I ate because vomiting was the only coping method I knew to regain control over my uncontrollable body. There was no bodily autonomy in my mental illness, I later found, but this was my first attempt at taking charge of my own body once the port was out, the drugs were done, and I was sent back into the real world again.

On top of that, I ended a long, emotionally abusive relationship after my treatment ended. Dealing with this kind of breakup while recuperating from chemo was close to unbearable. Post-chemo and post-abuse, I lost my sense of self, and struggled to figure out the path my newly-healed body would take. After treatment and the breakup, I didn't know where to place my sexual energy. My ex had told me that my sex drive was a result of self-hate and depression, and the message stuck with me — it was a year before I knew I'd been a victim of gaslighting. But as my recovery played out, I realized that the words I used to describe my story of healing should be mine, not his. So I began to experience self-exploration, and self-love, for the first time in a while. I owed it to myself, now as a survivor of cancer, an eating disorder, and abuse, to learn to be in charge of my body in an empowering, not harmful, way.

It was the moment when Josh* bit my scar that I realized what it meant to reclaim my narrative. It was, for once, totally up to me how to handle it.

Being openly sexual and sick, or a survivor, or both, is taboo, even though the barriers between the sick and healthy are much more nuanced than a lot of us think. I like to blur the lines. If I stay quiet about my experiences, I feel as though I create the potential for my partner to physically or emotionally hurt me. Instead, I say "I had cancer," and protect myself from compartmentalization. This allows a safe space for exploring a body that once betrayed me, while opening up the room for honesty and vulnerability (which is always good for sex).

There's absolutely no shame in not understanding what it's like to be in my shoes. And as a cancer survivor, it's assumed we aren't supposed to fill you in on the rest — instead, we're meant to let healthy people flourish, without expecting them to ever experience the uncomfortable honesty of being open about mortality. It is absolutely uncomfortable to be a cancer survivor — it's uncomfortable to say to people "I had cancer" when we're lying in bed. But otherwise, they may never know the story of someone who's young and sick. So I say it. And this way, I can fully be able to explore and enjoy my body — a body that can both hurt me terribly and give me so much joy.

I had cancer. I feel a bit more sure of myself every time I say those three words. I also like sex. And while there's nothing sexy about sickness, it's still empowering to admit that both these things are true about me.

*Names have been changed for anonymity