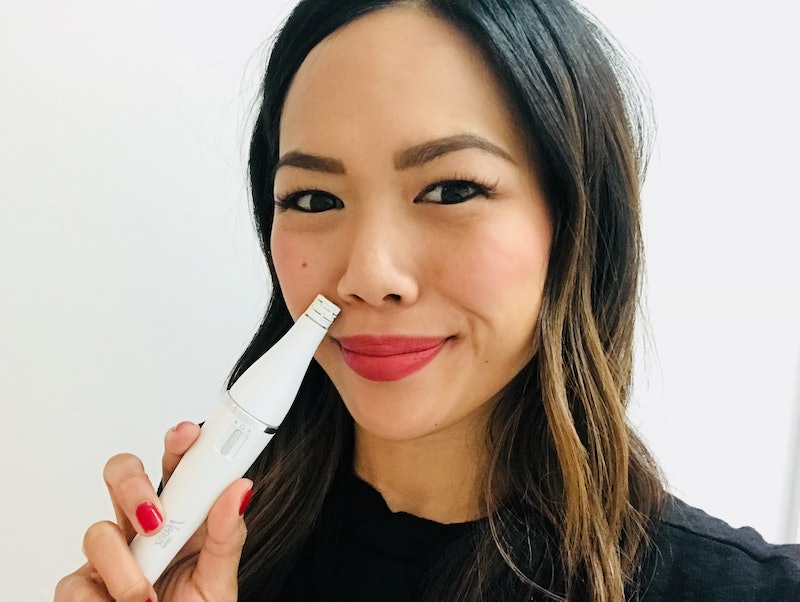 I remember the first time I realized I was growing hair above my upper lip. It was when a very rude seventh grader decided to point it out in front of my friends and me during our lunch break. He wasn't wrong — just mean — and ever since then, I've been religious about making sure my 'stache is basically nonexistent, not because of him, but because I personally prefer to keep that area hair-free. Over the years, I've tried pretty much every method to remove facial hair, from waxing and threading (ouch) to my usual go-to, the tiny Japanese razor called the Tinkle. So when Venus decided to create their very first facial hair removal device, my hair and I were game.

The Venus Face Perfection is a handheld gadget that can be used on the sensitive areas of your face, including your chin, upper lip, forehead, and between your eyebrows. It is not a razor, but an epilator that mechanically removes multiple hairs at once. The head of the device features 10 micro-openings that aim to pluck the tiniest, shortest, and finest hairs quickly from your face. It moves in two directions — left and right — so you can remove hair on either sides of your face more easily, depending on how you're holding the device. After using the Venus Face Perfection, the device claims you'll have up to four weeks of smooth, hairless skin.

When I first looked at the device, I wasn't quite sure how I was supposed to use it. It was much smaller than any other epilator device I've ever seen before. To be honest, it did not look very powerful at all and I wasn't convinced it could remove my facial hair the way that it had claimed.

That quickly changed after I turned the device on. The head began to spin super fast — almost too quickly. I was a little afraid to hold the device up to my upper lip area, so following the instructions, I tried it first on my chin to get used to how it felt. I pressed the device down onto my skin and it startled me at first — you can definitely feel the micro-openings snatching up your hairs, like soft little pinches. But after a few seconds, I got used to the sensation and decided to give it a whirl on my mustache area.

I was immediately impressed by how quickly the device worked. In a matter of seconds, my upper lip hairs were completely gone. When I used the device on the left side of my face, I switched the device so that it spun to the left. When I moved to the right, I switched it to the right. In addition to taking no time at all, the entire process was pretty much pain-free, unlike waxing and threading treatments.

I was a little more hesitant to use the device between my eyebrows, but the size of the openings on the head are so small — less than half an inch total — so there wasn't really any way I could mess my brows up (unless someone bumped into me and moved my arm). I stood close to the mirror, away from anything that could bump or move me, and in less than a few seconds, my tiny hairs between my brows were gone.

After using the device, per the instructions, I decided to apply a cooling moisturizer (I used La Mer's Moisturizing Cool Gel Cream) to calm my skin. The areas where I used the device didn't feel raw or sensitive, but I wasn't sure what my face was going to look like after a few hours and didn't want to take any chances. I was pleasantly surprised to see that at the end of the day, my skin was totally fine. I didn't experience any redness or irritation at all from the device, which can sometimes happen to me after I wax, thread, or even shave (with a facial razor).

I will definitely be using this device again to remove my facial hair, especially on my upper lip area. I could not believe how easy the gadget was to use and how quickly it worked. I also loved that I experienced no pain, no redness, and no irritation while using it, as well as after. I will still get my eyebrows waxed, as the device isn't great for shaping your brows, but I will use it in a pinch when I start to see little hairs pop up in between them.

More like this
This Week's New Makeup Releases & More Beauty Headlines
By Olivia Rose Ferreiro and Erin Stovall
July’s 13 Best Beauty Launches, According To Our Editors
By Bustle Editors
Fresh Makeup Releases & More Beauty Buzz
By Erin Stovall and Olivia Rose Ferreiro
This $18 Cream Blush Gave Me Dewy Cherub Skin
By Jordan Murray
Get Even More From Bustle — Sign Up For The Newsletter