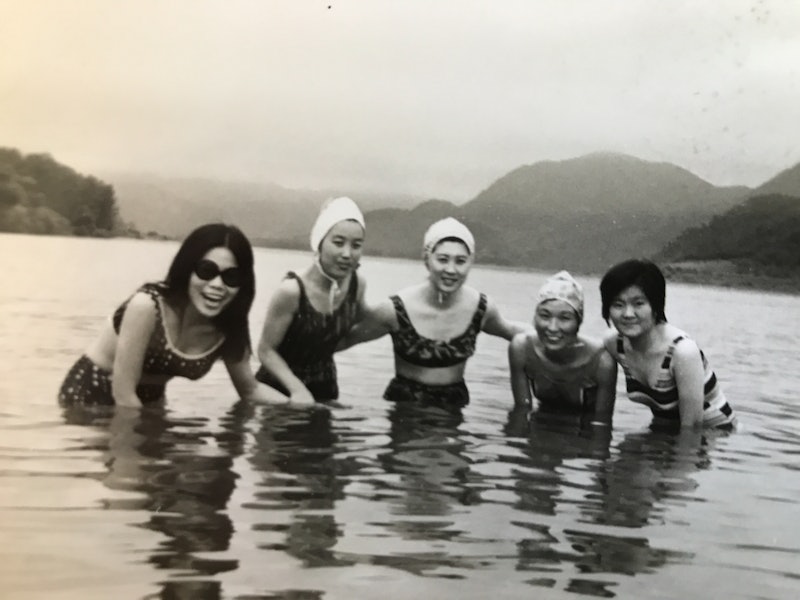 Before I learned to write my name, my mother dragged me to salons for perms. She had manicures done on my tiny nails and outfitted me in frilly dresses. "You can never erase a first impression," was my mother’s mantra.

According to my mother, it was my duty to look beautiful. We moved constantly and lived in areas where we were among the few Koreans. It didn’t matter if we were broke, we had to ensure we always embodied elegance. Otherwise, Americans would take note and I would reflect poorly on Koreans all over the world.

Whenever someone complimented my physique, my mother beamed as though she had won gold. She didn’t seem impressed that I had been awarded “Best English Student” as long as I maintained my reign as Tallest Girl At Korean Church. “I prayed to God every day so you’d turn out tall and thin like your father,” she smiled.

My mother begged me to get plastic surgery to enlarge my eyes, wailed when I refused to follow up after being approached by a casting director for an Aveda ad, protested when I pulled out of a haute couture runway show I was scouted for, sobbed when I came home for Christmas with my lip pierced. She pled with me to please, please change my resistance toward beauty so I could attract a good husband.

The more beauty tips she offered and the more she begged me to dress fashionably, the more I rebelled. While girls were memorizing makeup tips from Seventeen, I preferred reading ethnographies and novels. My mother shrieked when I assembled care packages for homeless women with the makeup samples she gave me. I washed my face with bar soap and my mother gasped at my savage behavior.

My mother left voicemails telling me to wear a hat (so my face wouldn’t tan), wear lipstick to class (in case I encountered a single doctor — I regretted mentioning that my graduate program was housed in the same building as the medical school), and always smile in public. She wasn't just projecting on me either: My mother’s commitment to beauty rivaled that of a pageant contestant. She meticulously cared for her skin, routinely applying creams, cucumber treatments, and facial massages.

As a feminist and Seven Sisters graduate, I was convinced that beauty products were surely invented to keep women down and broke. I didn’t want to waste my life cooking and cleaning for a man. I dreamt of becoming a veterinarian and saving lives or being a professor where I could spend endless hours reading and writing.

After college, I decided to apply to teach English in Korea and learned that it was a common requirement to attach one’s photo to a resume. Baffled, I couldn’t believe this was legal. My mother repeated, “You are always judged by your appearance.”

It wasn't until adulthood that I began to understand my mother’s obsession with beauty. She began to share memories: How she witnessed North Korean soldiers holding guns to her mother’s head, forcing her to cook her meager food supply for them while her family starved. How, when the Korean War began when she was seven, she walked for days with her family from their home in North Korea to the south to escape the escalating violence, with nothing but the clothes they wore. How she and her family slept on the floor of a church for months, not knowing when their next meal would be.

Unable to ever return home again, my mother’s family settled in South Korea. On the day my mother graduated from nursing school, she walked into a hospital to seek work. Despite her limited wardrobe, she maximized her assets, carefully applying her makeup and selecting an outfit that accentuated her curvaceous figure, extraordinary amidst South Korea’s waifish bodies.

“The doctor took one look at me and said, ‘You’re hired,’” she said.

After hearing her story, I often thought of my mother's mantra.

In South Korea’s ultra-competitive, image-obsessed society, beauty was a physical marker of one’s commitment to success. Beauty was a weapon that could be deployed to fight patriarchy, a source of power for getting ahead despite patriarchal constraints that limited options for women.

As the head nurse of an operating room in South Korea, my mother went from having nothing to living her best life. She commissioned custom-designed outfits for her curvy figure, ensuring she always looked impeccable. For my mother, beauty meant empowerment and independence.

After immigrating to the U.S. in 1976 and losing her career and independence, beauty was one thing my mother could maintain. No matter how hard things became, she got out of bed every morning and performed her beauty regimen with precision and allegiance.

Growing up, everything I associated with beauty had negative connotations: vanity, sexism, superficiality. Beauty meant surrendering to patriarchal standards, I thought.

While experiencing severe depression after returning from working at a peacekeeping mission, I heard my mother’s voice in my head, cheerleading with the battle cry favored by Korean mothers: “FIGHTING!” I dragged myself out of bed, carefully applied lip gloss, put on a cute outfit, and suddenly gained enough energy to leave my apartment. I thought of my mother and finally understood how her obsession with beauty kept her alive through dark days. Beauty wasn’t just a performance for the benefit of the outside world; it made me feel good inside and lifted my spirits.

On a recent trip home, I caught my septuagenarian mother sitting at the dining table with downturned lips, looking into her handheld mirror.

“How does your mother look?” she asked.

“Beautiful,” I said, and watched her face light up.

More like this
15 Must-Have New Beauty Launches, According To Our Editors
By Rachel Lapidos
This Week’s New Makeup Releases & More Beauty Headlines
By Audrey Noble
Billie Eilish Teased The Debut Of Her New Fragrance
By Audrey Noble
Everything You Need To Know About Ephemeral Tattoos
By El Hunt
Get Even More From Bustle — Sign Up For The Newsletter