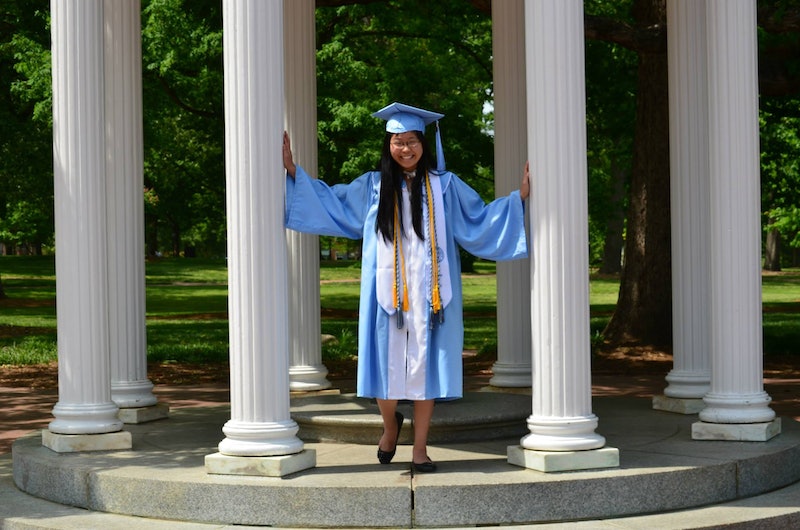 A few days ago, I picked up the phone and called a senator for the first time in my life to explain why, as a former disabled student educated in public schools, I highly opposed Betsy DeVos for U.S. Secretary of Education. A recording asked me to leave a message for North Carolina Senator Richard Burr, promising that all messages are forwarded to him daily. Nervous but determined, I declared into the phone: "Hi, I'm calling to voice my opposition against Betsy DeVos, the head nominee for Secretary of Education. I grew up in North Carolina and was educated in the North Carolina public schools.." I made my case and ended with a final statement: "DeVos isn't qualified to lead this country's education system, nor has she convinced me that she'll advocate for all children, least of all children with disabilities like me. Senator, please consider what I've said before you cast your vote."

I hung up the phone, feeling empowered by what I had just done. I knew thousands of other people were probably calling their senators too; perhaps my call would be the 50th or 500th or 5,000th message that Sen. Burr received regarding DeVos' nomination. I could only hope my message made a small difference of some sort.

But yesterday, my heart sank when I heard the news: The Senate Health, Education, Labor, and Pensions Committee had voted to move Betsy DeVos forward in the process of becoming the U.S. Secretary of Education under Donald Trump's administration. I know the decision isn't final; DeVos still has to make her case in front of the full Senate before a final confirmation vote is cast. But it was a blow I felt keenly all the same.

There have been many arguments both for and against DeVos becoming the new Secretary of Education. Opponents (who are overwhelmingly Democratic) say that the fact that she has no experience in public schooling, her pro-school choice stance, and her family's financial and political ties all make her unfit for office. On the other hand, Republicans say that DeVos has been committed to the future of children from the very beginning, and that school choice does not mean some kids get left behind. Oftentimes in the heat of political discourse, it's difficult to put aside partisan bias so that we're able to truly understand the potential future consequences of specific policies or leadership appointments. I don't doubt DeVos' years working in education politics, funding nonprofits like the Kennedy Center for the Performing Arts, voicing her support for homeschooling, and advocating for charter schools. However, as I learned more about her background, and as I watched her congressional hearing, it became clear to me that her priorities as an education policymaker do not consider the best interests of all children. In fact, if she had been the Secretary of Education about a decade ago, I may not have gotten to where I am today.

I am a disabled woman of color who grew up in North Carolina and attended public schools all through childhood and college. Due to vocal cord paralysis, I've had to wear a tracheostomy tube to help me breathe my entire life. During the school day, a nurse followed me around from classroom to classroom so that I could still learn the lessons alongside my peers, and yet assist me if needed.

In fact, if she had been the Secretary of Education about a decade ago, I may not have gotten to where I am today.

Every hour or so, I have to "clear out" my trach tube with saline and gauze. During my school years, this process meant missing several minutes of class a day — missed time which could particularly impact exams. My teachers accommodated me, however, by giving me extra test breaks and repeating a couple of key lesson points after class as needed. In elementary school, I was also given speech therapy lessons with a student-teacher ratio of 2-1, which greatly improved my ability to recite readings in class, give class speeches, and read my writing assignments out loud.

After high school, I went on attend the University of North Carolina at Chapel Hill, majoring in journalism and psychology and receiving highest honors for my journalism senior thesis. Last year, I received my master's degree in journalism at Columbia University, and now I live and work as a journalist in one of the most exciting cities in the world: New York City.

None of this would have been possible for me if I hadn't been protected in school by the Individuals with Disabilities Education Act (IDEA), a federal law that requires all schools to provide the necessary accommodations for kids with disabilities without compromising a high-quality education — and with which Betsy DeVos appears distressingly unfamiliar.

Introduced in 1989, the IDEA was crucial to integrating disabled kids like me into classrooms nationwide with educational approaches that best fit their needs. (The IDEA should not to be confused with the Americans with Disabilities Act, or ADA, which forbids employment discrimination and requires that people with disabilities have access to public accommodations and all forms of accessibility in transportation, amenities, and more.)

One important aspect of the IDEA is the Individualized Education Program (IEP), which ensures that a student's educators map out a plan for how they will tailor their classroom instruction so that disabled kids can learn, too. That doesn't mean disrupting the class for all the other kids; it means giving disabled kids the tools they need to succeed at their own pace. For me, it was an essential part of my school experience, ensuring I received the quality of education to which all children should have access.

The accommodations I received in class — a nurse aide, extra test breaks, etc. — were all provisions in my personal IEP. Every time I began a new school year or whenever I changed schools (moving, for example, from elementary school to middle school or from middle school to high school), my parents and I would arrange a meeting with all of my teachers, the school nurse, my case manager, and sometimes even the principal or a school psychologist. At the time, I used to feel embarrassed about having so much individualized attention; now, though — older and hopefully wiser — I realize it is an absolute privilege to live in a country where this kind of accessibility for disabled students is the law.

For me, [the IEP] was an essential part of my school experience, ensuring I received the quality of education to which all children should have access.

During DeVos's congressional hearing, it became clear that she wasn't nearly as familiar with the IDEA as an education policymaker should be. (At best, in her own words, she "may have confused it" with another law, which isn't exactly heartening). Nor was the IDEA the only thing she appeared unclear about. She also refused, for example, to give a clear answer to Sen. Patty Murray about how she would enforce sexual assault laws on college campuses; she said only, "I will be looking very closely at how this is regulated and handled," but did not take back the cited claim that she would "reign in" the department's Office of Civil Rights as an effort to support sexual assault survivors. She also failed to pinpoint the difference between proficiency and growth in education, which Sen. Al Franken pointed out is one of the foremost discussions in education policy today. And when asked about the question of whether or not guns should be banned from schools, she stated she believed it should be up to individual states, citing — I kid you not — "potential grizzlies" roaming about as a possible reason to support the presence of guns in schools.

A couple of days later, DeVos did send a letter to the Senate committee to clarify her position on the IDEA, saying, "I am committed to enforcing all federal laws and protecting the hard won rights of students with disabilities." She also outlined several ways in which she would uphold the IDEA, like funding research for evidence-based practices that support students with disabilities and providing access to more educational options for parents with children who have disabilities.

This is all very well, but my concern lies in the reason she had to send a letter in the first place. Why was she unable to demonstrate knowledge of the IDEA during her hearing? Knowing the IDEA isn't just homework for educators and education policymakers; it's a required federal civil rights law that provides a high-quality education for more than 6.5 million children with disabilities between the ages of three and 21. If she wants to take office as Secretary of Education, it's her job to know these kinds of laws, or at least understand their implications.

As the Secretary of Education, DeVos will hold a powerful government position that oversees the entire department, decides how to use federal funding for schools, and ensures that all school districts follow federal education laws like the IDEA. As a white woman and billionaire who comes from a place of immense privilege, Betsy DeVos has shown that she doesn't understand the needs of marginalized communities — least of all young Americans with disabilities.

Although I've grown up and graduated from school, there are millions of children in our education system — children who are either just like me or even less lucky than I was — who need someone in the education system who will advocate for school policies that will not only support their education rights and provide them resources to learn, but also help to advance their future. That person is not Betsy DeVos.

I can only hope that the Senate understands that, too.

More like this
Here's How To Support Jewish People Amid Rising Antisemitism
By Hannah Orenstein
Prince William Condemns “Unacceptable” Comments Made To A Black Guest At Buckingham Palace
By Shahed Ezaydi
The 15 Best Reading Journals For Book Lovers
By Debbie Lee
An Open Letter To The Person Who Bought Steve Jobs’ Birkenstocks For $218,000
By Ginny Hogan
Get Even More From Bustle — Sign Up For The Newsletter