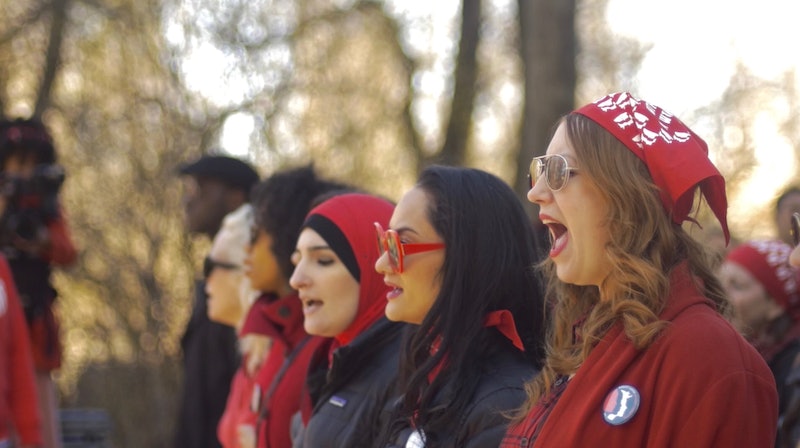 On March 8, International Women's Day, the organizers of the Women's March on Washington encouraged women to strike from their workplaces in order to show the impact women have on the economy and draw attention to gender inequality. During this Day Without a Woman, 13 women, including several of the organizers, were arrested and charged with disorderly conduct and blocking vehicular traffic when they obstructed an intersection at New York City's Columbus Circle. Women's March co-founder and organizer Bob Bland was among the women arrested, and here she shares her story, as told to Bustle Executive Editor Julie Alvin and with additional background from activist Winnie Wong.

After we were arrested for peacefully occupying the Columbus Circle intersection in front of Trump International Hotel on Wednesday, my fellow organizers and protesters and I were in high spirits. We had just participated in a peaceful demonstration of civil disobedience, and we were singing protest songs and talking to each other about the next actions we were going to take.

But, our experience with the NYPD, as Women's March Director of Communications Cassady Fendlay commented, was, for us white women in the group, basically the greatest privilege walk we could ever take. The NYPD was completely professional in their treatment of us, and I couldn't have asked them to do their jobs any better. But as allies, it was important for us to recognize that the way we were treated throughout the entire process was so different for us as people of privilege, and as people who are well-known organizers of this movement, than it has been for Black Lives Matter activists and for people in the marginalized communities that we fight for.

Past civil rights activists have been thrown in jail for weeks at a time in order to punish or discourage them. And undocumented immigrants and young people of color are pulled off the street every day without being told why, without being told what they did wrong, without any information about when they will be released and reunited with their families. This arrest was just another opportunity for us all to reflect on the ways that our low-income, black, and brown communities have been so profoundly affected not just by the Trump administration, but by police tactics through generations. How does that affect their prosperity, their security, their ability as Americans to participate in the opportunities that this country holds and that we should all have access to?

I was separated from my three-month-old daughter Chloe for a period of nine hours during the arrest, and that also offered a reflection opportunity for me. I had luckily gotten Chloe to a trusted friend before the arrest, and I just had to have faith that she got back to our family, because I had no way to communicate with the outside world and I didn't know how long we would be detained.

I breastfeed Chloe every two hours and I was in jail for nine hours, so I had to hand-express my milk into the sink that they have in every cell.

I breastfeed Chloe every two hours and I was in jail for nine hours, so I had to hand-express my milk into the sink that they have in every cell. We communicated my situation to the police, but I was still one of the last of the women to be released. While I'm not going to in any way disparage the treatment I received from the NYPD, I didn't get the sense that they prioritized the fact that I was the mother of a nursing infant. This made me reflect on how many mothers are incarcerated in America's private prison system, and ripped away from their children — many times kids as young as my daughter — and their families, and how catastrophic that can be.

And the vast majority of people who are incarcerated don't experience the solidarity and support that my fellow organizers and I experienced on Wednesday. It was beautiful to be surrounded by likeminded women on the cell block, who all acted as a supportive presence for one another throughout the day. Over 120 demonstrators came to the precinct and stood outside for hours waiting for our release, and we could hear them cheering in our cells. We are incredibly grateful for them, and I'm so inspired by the solidarity of the Women's March team, who waited until everyone last one of us had been released before they would leave the precinct themselves. That sense of community is remarkable.

As a first-time activist, I think one of the most meaningful things I've seen throughout the course of the resistance is how it is unifying previously disparate communities together in a very resilient way. It's incredible to see what that could mean for our strength across the nation as we continue this resistance. And as the movement grows, I am more certain than ever that the only way to have a truly inclusive society is to put women, and women of color in particular, in leadership positions, in the driver's seat. It organically creates inclusion in a way that cannot be replicated by good intentions. You just have to have let women take the lead.