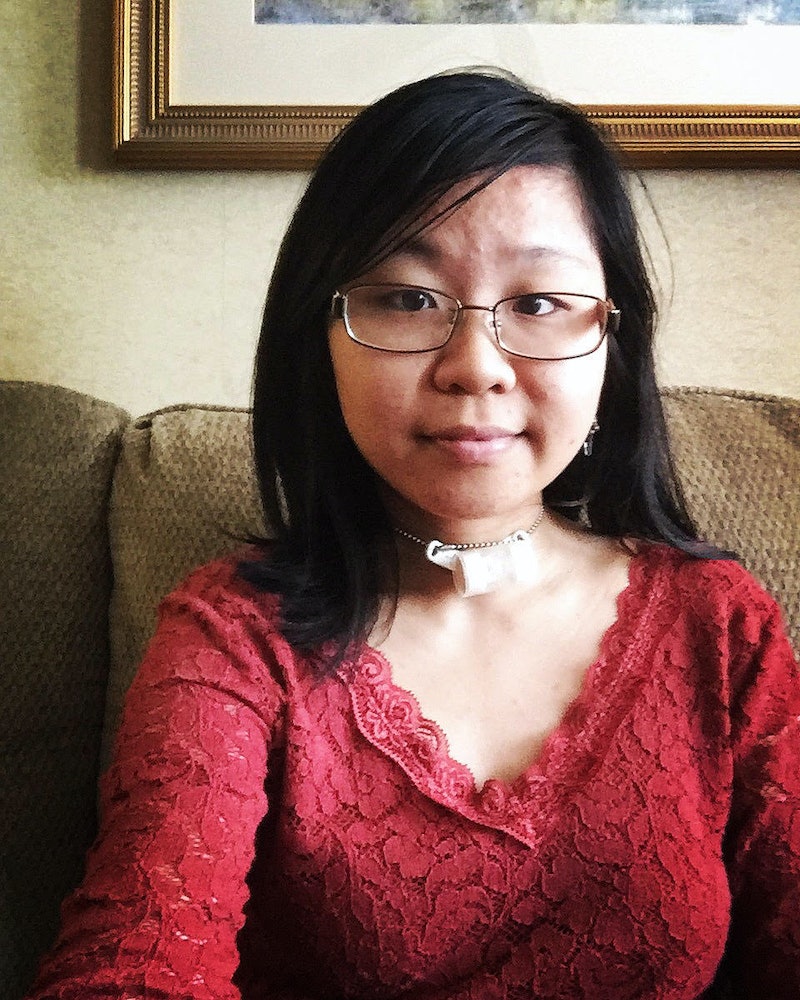 I sat cross-legged on the floor of a dimly lit bar, where I talked about sex positions and polyamory with total and complete strangers. We formed a circle, some of us sitting in comfy armchairs and others sitting on top of carpets, checkered mats, and wool blankets. Pillow cushions sprinkled the room. Tea candles in mason jars cast a soft glow on people's faces. As the program began, I couldn't help but play Salt-N-Pepa's "Let's talk about sex" in my mind. I was at a monthly community gathering called Touchpoint, where strangers talk about sex and dating.

Touchpoint is a monthly community gathering that was launched in New York City in April 2016. The process for attending is fairly simple: Participants sign up beforehand, submit discussion questions, and then vote on the most popular ones, which become the focus point during Touchpoint. Over the past year, more than 1,200 people have attended Touchpoint and meetings have been held in Miami, San Francisco, and Mexico City, in addition to New York.

The community emphasizes on being a safe space where people can share their experiences and thoughts without fear of judgment, shame, or disrespect. In fact, one of the rules for Touchpoint is to listen with an open mind. People are encouraged to be themselves, or — as Touchpoint founder Jared Weiss says — "let your freak flag fly." At the gathering I went to, he estimated that more than 20 percent of questions submitted for the event start with "Is it OK if...?" For instance, is it OK if someone's not really into oral sex? Is it OK to be attracted to a coworker? "We give people permission and a platform to have the conversations we desperately want to have but have been told and shamed not to," Weiss says.

On the night I went to Touchpoint, the main topic that won the most votes was trust and transparency: What's the balance between honesty and personal privacy in a partnership? Over the two hours, people took turns swapping stories with the crowd, a diverse group of men and women in their 20s, 30s, and 40s. (One couple in attendance actually started dating after they met at Touchpoint.) We talked about everything related to relationship trust, from non-monogamous relationships to emotional cheating.

Here's what I learned from talking about sex with more than 100 strangers:

There Are Two Kinds Of Transparency

At Touchpoint, I learned about a new term called radical transparency, the philosophy that that all information (thoughts, reservations, fears, desires) should be disclosed in a relationship even when it's extremely uncomfortable, as opposed to only being transparent when your partner asks for it. Couples should be completely open about how they feel without getting defensive or worrying about revealing too much. This is different from being transparent only when a partner asks for transparency.

The idea of disclosing everything that's harboring in my head and heart seemed extreme to me — not in a bad way, just new. There's a difference between what you're feeling inside and what you want to express (not to mention the how). With radical transparency, it's not exactly about what you say or don't say. There's no question about whether or not to talk about something; rather, it's about when to bring it up.

On the flip side, if someone in a relationship asks the other person to be completely honest about an issue in the relationship, then they have to be mentally prepared to receive that honesty.

There was a general consensus that honesty is way better than lying. One person at Touchpoint posited: "If you're dishonest 10 percent of the time, then people will distrust you 100 percent of the time." But what about honesty versus omission? Another participant brought up the idea of merging radical transparency with "radical sensitivity." That is, being really honest all the time about what's going on, but also taking the extra time and care to share your experiences and emotions in a way that's kind and considerate of the effect that may have on the other person.

That being said, I feel like every person has different relationship needs and preferences. For instance, in non-monogamy, one partner might like for the other person to disclose their intimate experiences with strangers or casual dates. The other person, however, may prefer not to hear anything about what his or her partner has done outside of the relationship, even if permission has been granted. In that case, honesty may become unwanted and even hurtful; after all, not everyone wants to hear wild, crazy stories about their partner getting it on with someone else.

Everybody Has A Different Sexual History

Our Touchpoint gathering was comprised of people coming from various types of backgrounds (sexual and otherwise). Some were serial monogamists, while others went to group sex parties regularly. Many people shared stories about being with others who were so shocked with how much kinky stuff they'd done that they began treating them differently. There were sexual experiences that seemed so out of bounds (even if it was in the past) that they couldn't get past it. While it's understandable to be surprised by such discoveries or new information, people should never be sexually shamed. No matter how many people you've had sex with or how many positions you've heard of, it's important not to change yourself for other people unless it's something you want as well.

I was glad that I went to Touchpoint in the end, and I've even gone back since that first time. It was a supportive community, both for those who spoke up and those who simply wanted to listen. For every story told, people clapped, whistled, and encouraged one another. If there's anything that I learned from Touchpoint, it's that there are endless possibilities to explore when it comes to love, sex, and personal happiness. And that's pretty awesome.