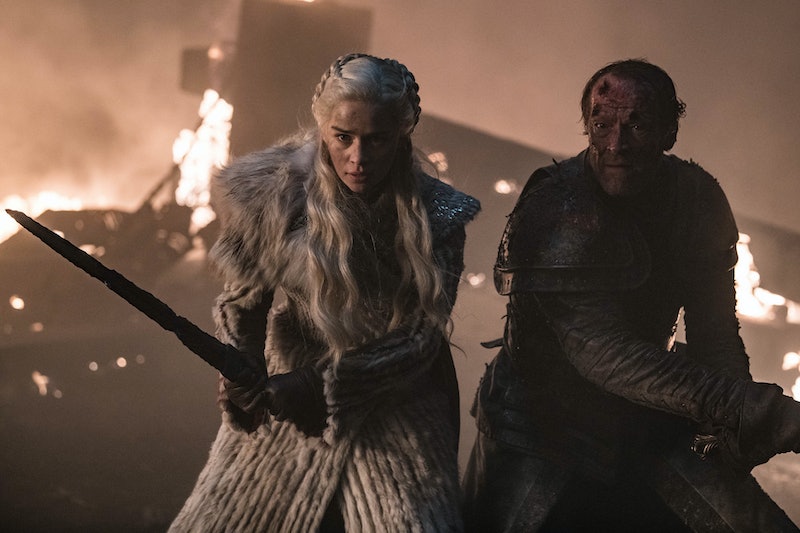 The Battle of Winterfell may not have resulted in as high of a death toll as many of us may have expected, but the losses that did occur were absolutely heart-wrenching, particularly when it came to the death of Game of Thrones character Ser Jorah, who has been apart of the series since its inception. He died as he lived: protecting his Khaleesi, which is how you imagine he would've wanted to go. However, despite the character's fitting ending, actor Iain Glen has one regret about Jorah's death that he shared with Entertainment Weekly shortly after filming his final episode of the show. And yes, it will definitely break your heart into a million pieces all over again.

When asked if there was anything he wished his character had gotten to do, only one answer came to Glen's mind. "Other than the painfully obvious one of making love to Daenerys, way back when, in all honesty, no. It would feel churlish and ungrateful even if I could conjure up something," the 57-year-old actor explained. "I’ve always felt very looked after. The whole greyscale journey was not in the original books, and that was something they gifted the character. I could say I wish Jorah expressed himself more, but that’s just not who he was."

Indeed, Jorah has always pined for Daenerys from afar, but while she continuously relied on him for counsel and cared for him in the highest regard, he always remained clearly in the friend-zone with her, watching with a noticeably longing as other men came and went from her life. So it's not exactly surprising that Glen was secretly rooting for the two of them to get together at some point (after all, no man as proved his love and devotion to her more than him), but that's the thing about unrequited love — more often than not it goes, well, unrequited.

Daenerys loved Jorah with all of her heart, which is why that scene of her sobbing over his dead body was so painful (and yet beautiful) to watch. But even though Jorah didn't achieve his ultimate dream, Glen is beyond grateful for the extensive story arc he was given and actually prefers that fans got to see an end to his character's journey, telling EW:

"You could be a question mark or conclude as a character. The question mark ending is where you get to the end of the whole thing and people try to project forward what his future is that you’ll never know. I’m happy to conclude — particularly, as you say, as somebody who teetered on the edge of going out earlier."

This is, of course, a reference to when Jorah contracted greyscale in Season 6 and it looked as though his time on the series was drawing to a close. And yet he was able to defy the odds and stick around until almost the very end. All-in-all, Glen wouldn't have wanted it any other way. "This is the season to go, if you’re going to go," he said. "It’s a heroic and satisfying demise."

He died in the arms of the woman he loved after protecting her from harm one final time. It's a hero's death and one that Jorah more than deserved after his many years of loyal service.