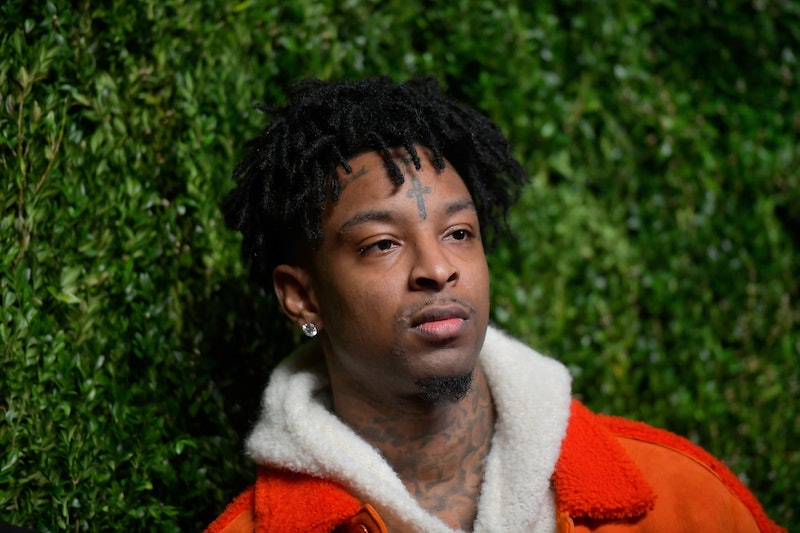 Before the kickoff of Super Bowl LIII on Sunday, rapper 21 Savage was arrested by ICE. The agency said that the Grammy-nominated rapper had overstayed a visa, which reportedly expired in July 2006, according to CNN. His attorney emphasized to CNN that they are trying to "clear up any misunderstandings." Bustle has reached out to ICE and 21 Savage for comment.

The rapper's attorney said they are working to secure his release. "We are working diligently to get Mr. Abraham-Joseph out of detention while we work with the authorities to clear up any misunderstandings," attorney Dina LaPolt told CNN. "Mr. Abraham-Joseph is a role model to the young people in this country, especially in Atlanta, Georgia, and is actively working in the community leading programs to help underprivileged youths in financial literacy."

21 Savage — whose full name is Sha Yaa Bin Abraham-Joseph — entered the country in July 2005 as a minor from the United Kingdom, according to The Atlanta Journal-Constitution. ICE spokesman Bryan Cox told the newspaper that the rapper was arrested as a part of a "targeted operation" in Atlanta and will be put into "removal proceedings before the federal immigration courts." In a separate statement, the same ICE spokesman told The Washington Post, "ICE will now await the outcome of his case before a federal immigration judge to determine future actions."

An ICE spokesperson reportedly also told CNN's Nick Valencia that Abraham-Joseph came from the United Kingdom. "His whole public persona is false. He actually came to the U.S. from the U.K. as a teen and overstayed his visa," Valencia wrote in a tweet on Sunday.

Abraham-Joseph is considered an Atlanta act, and frequently gave back to the area, including donating free school supplies to over 2,500 students in DeKalb County. "I might rap about a lot of stuff, but that’s just a reflection of what I’ve been through," Abraham-Joseph said at the event in August 2018, according to The Atlanta Journal-Constitution. "In real life, everything I do, I want to bring everybody together. I want to give back to the community, help the kids, get them uniforms, books, book bags, everything they need … just do better. That's where it starts, the kids."

In fact, the rapper performed in Atlanta at the Bud Light Super Bowl Music Fest on Thursday to kick-off the massive football game, according to Atlanta magazine.

On Monday, Abraham-Joseph also performed a new version of his song "A Lot" on The Tonight Show Starring Jimmy Fallon, including new lines that referenced immigration and the crisis of family separation at the border. "Started from the bottom straight from the gutter, so I had to go a lil' harder/The lights was off, the gas was off, so we had to boil up the water/Been through some things so I can't imagine my kids stuck at the border/Flint still need water/People was innocent, couldn't get lawyers," he rapped during the performance, according to hip hop magazine XXL.

Abraham-Joseph was also convicted of a felony drug charge in 2014, according to NBC News. It's unclear why his immigration status didn't come up during that investigation.