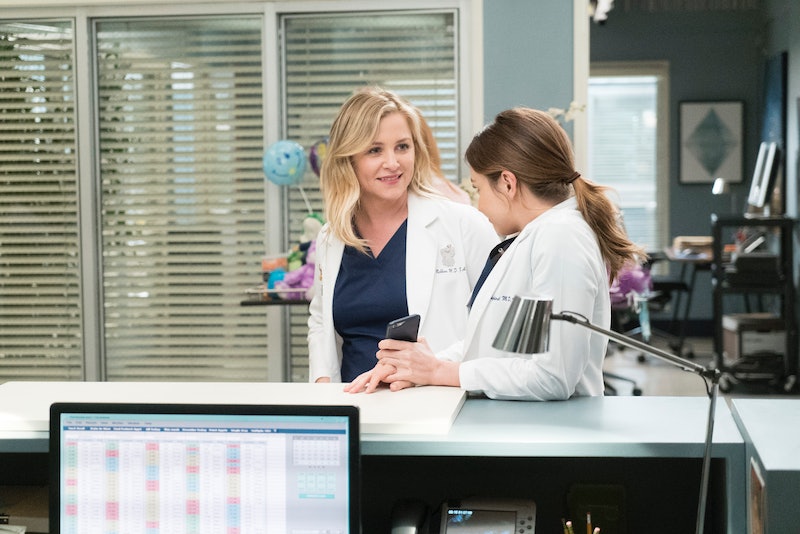 Grey's Anatomy fans weren't ready for the news that Arizona and April were leaving Grey's Anatomy, and they may not be ready for the way both characters go, either. April has rediscovered religion and she no longer blames God for her troubles, but with Arizona, it's a little more complicated — does Arizona have breast cancer on Grey's Anatomy? If this is the way Arizona is going to leave the show, fans are going to be absolutely furious with Shonda Rhimes.

Arizona is clearly doing her farewell tour, and it's not a good look for the show. Why are you doing this to us? It all started when a patient came in after an auto accident, claiming to have breast cancer. Long story short, scans done at Grey Sloan proved that she actually didn't have cancer! So Owen and Arizona went to this quack doctor (played by Hal Sparks, who was so great on Queer As Folk. Remember him?) and he told Arizona that she, too, had cancer. Given this guy's track record, we shouldn't believe it, but oh my god, Arizona might have breast cancer. Is this how it ends? Is this how we lose one of the best and most important LGBT characters in recent primetime television? Well, not quite, as it turns out that Arizona's scans were also faked, too, and she is fine.

Besides the fact that killing Arizona would be killing a very popular character and it's not a fair way for her to leave the show, killing Arizona would just add to the body count in the "Bury Your Gays" TV trope. Coined in 2016 after a record four lesbian characters were killed off shows in as many weeks, "Bury Your Gays" highlights how Hollywood is hurting queer women. According to The Hollywood Reporter, "the trend has seen a disproportionate number of LGBT characters killed off, often in the name of propping up and/or advancing a heterosexual leading character's storyline." As the article states, fans are not happy about this — first, they have a person to relate to and look up to, and then that person gets killed off? It's not fair, and Hollywood is doing queer women a disservice in continuing these plots. Killing Arizona would add to the list.

One would hope that Shonda Rhimes would be better than doing this to Arizona, but given the "I-didn't-see-that-coming" nature of Grey's Anatomy, it's hard to tell if perhaps Arizona not having cancer could actually turn into her being sick. It would be, arguably, the worst way any Grey's Anatomy character has left the show. Killing off Arizona would be doing Jessica Capshaw, an actor who has given us so many seasons of good work, dirty. Really dirty.

But maybe there is hope. When the announcement that Capshaw would be leaving the show was made, Rhimes' statement highlighted how important both Arizona and April were to her. She said:

“It’s always hard for me to say goodbye to any of my characters. Both Arizona Robbins and April Kepner are not only beloved but iconic — both the LBGTQ and Christian communities are underrepresented on TV. I will be forever grateful to both Jessica and Sarah for bringing these characters to life with such vibrant performance and for inspiring women around the globe. They will always be a part of our Shondaland family.”

Perhaps this bodes well, that Arizona will get the proper, dignified sendoff that she deserves from Grey's Anatomy. Both Arizona and April shouldn't be relegated to television stunts. Arizona was a groundbreaking character on Grey's Anatomy, and she should be given a departure befitting of her status, not a hackeneyed, half-assed cancer diagnosis that really wasn't necessary.