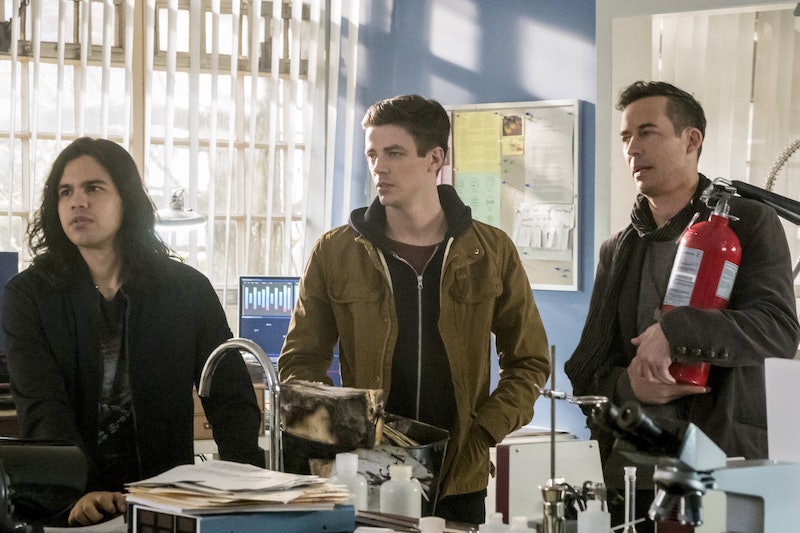 I love mystery as much of the next girl, but this season of The Flash is walking the line between mystery and oh-my-God-please-tell-me-already. This year, the DC comics series has once again struck the perfect balance between lighthearted fun times and dramatic cliffhangers. A consistent question mark that's been dominating the whole season is the secret identity of the big bad. Savitar has caused destruction throughout the city and within the Flash team. And yet audiences are still left hanging about Savitar's identity. One common theory is that Savitar is a future version of the Flash himself. However, there are other options. If Future Flash isn't Savitar, it could be one of these people.

And this is important, because unmasking Savitar is the key to defeating him and saving Barry's beloved Iris West. We know that there is someone fallible under the suit of armor, thanks to Jesse Quick and her willingness to face Savitar. But who is under the mask remains a mystery. All clues point to it being a familiar face, because that's the usual pattern of the show: the evil is someone we have grown to care about. That's what makes The Flash's ongoing battle between good and evil so complicated.

So setting Future Flash aside for a second, here are some other Savitar possibilities to consider:

Julian himself has never fully been a good guy on Team Flash. His alter-ego Alchemy is certainly no good, even though he was being possessed by Savitar. Julian only appears in the world after Flashpoint, a sign that he might be the new evil. When Caitlin sees who's under Savitar's mask, she instantly trusts him. Julian has been her guy this season, so this fits the bill. Julian also never cures Caitlin completely of her Killer Frost powers, perhaps a sign he never wanted to.

Another lover of Caitlin's is a growing person of interest. Fans are starting to speculate that Ronnie might be Savitar. Again, Killer Frost's instant trust of him is a big clue. Ronnie was the first love of Caitlin's life, lost after sacrificing himself to save others. But perhaps Ronnie didn't actually die, perhaps he is back, tortured and causing chaos. And as a person who already had powers, becoming Savitar wouldn't be too far a leap.

H.R. has provided lighthearted humor to the show all season. He is the goofy writer who may not add skills to the team, but certainly adds some levity. However, there is a chance that HR's innocent exterior is an act, and he is really Savitar's hidden self. After all, Season 1 revolved around Harrison Wells's double identity. To make H.R. the real bad of the season would be a callback.

Jay Garrick has become Barry's mentor. With deep wisdom and the face of his father, Jay has a trusted place in Barry's heart. But those who can seem the most trustworthy can also be the most treacherous.

Barry last left Jay in the Speed Force to relive his darkest moment over and over, with only the promise to return. Isn't putting Savitar in the Speed Force the exact reason he's all murderous now? Jay volunteers to take Wally's place but maybe thought Barry would save him sooner. He's also the original speedster and describes Savitar with fear in his eyes. So this alternate Earth Flash may just be the man under the mask.

Cisco started the season angry at Barry for going back in time, the result of which killed his brother. While this anger seems to be worked through, perhaps it wasn't. Caitlin and Cisco are best friends, so he also fits the bill when it comes to who Killer Frost would want to team up with. On a different earth, he's also evil, so perhaps he will become evil on Earth-1 too. His growing vibe power and deep knowledge of the team also make him a dangerous option.

Anytime someone is "dead" on The Flash, there is a possibility that they may return as someone else. Cisco Ramon's brother Dante would be a stretch for Savitar, but even stretches are decent possibilities at this point.

Maybe Barry's nemesis is a future version of the person he has spent so much time training. When Barry travels to the future, Wally is in a catatonic state after seeing who Savitar is. Could this be because he is Savitar? Wally is also the only speedster who is faster than Barry. Again, his motives would have to be explained, but this is still an option.

As you can see, most members of Team Flash have some chance of being Savitar. Future Flash is a strong guess, but he's not the only one.

More like this
Everything To Know About 'Evil' Season 4
By Meguire Hennes
Does 'Locke & Key’s Ending Mean There Could Be A Season 4?
By Sophia Moore
Netflix Just Rebooted A Classic ‘90s High School Drama
By Maxine Harrison
'Better Call Saul’s Co-Creator Explained Jimmy & Kim’s “Happy Ending” In The Finale
By Brad Witter
Get Even More From Bustle — Sign Up For The Newsletter