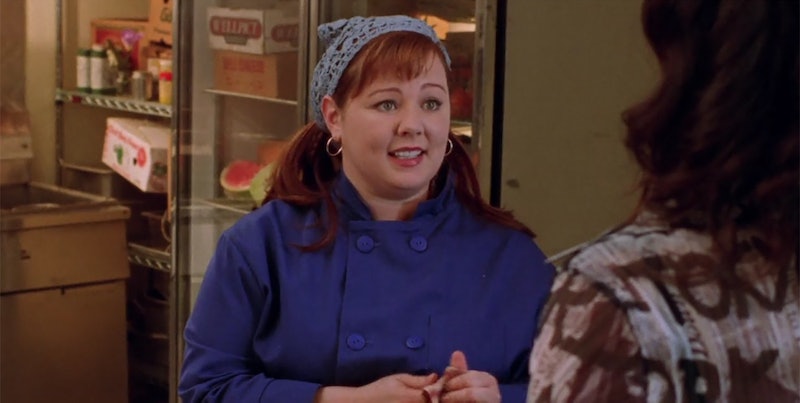 It has been months since Gilmore Girls: A Year in the Life ended on what most fans interpreted as a major cliffhanger. After years of waiting for those final four words, fans were treated with a baby daddy mystery and an immediate desire for more. While there has been no word yet on whether Netflix will give the people what they want, at least one fan-favorite would be unlikely to return. In an interview with Entertainment Tonight, Melissa McCarthy suggested she may be done with Sookie. And you know what, guys? That is totally OK. She joked to ET,

"No [I wouldn't come back as Sookie], but I would come back as Lorelai. And that is a challenge to Lauren Graham."

Given the joking nature of McCarthy's statements, she did not close the door on reprising her role as Sookie in potential future installments of Gilmore Girls entirely, but it would be understandable if she was ready to say goodbye. McCarthy's career is in an entirely different place these days. She is a certified Hollywood A-lister who routinely carries blockbuster films. As beloved as Sookie is, she doesn't represent the McCarthy of today — a woman who is incredibly busy building an indelible Hollywood legacy.

The Gilmore Girls revival gave Sookie, as well as Sookie and Lorelai's friendship, the best possible sendoff. In one scene, the characters were given the chance to express everything they meant to each other, while also establishing that Sookie's new career pursuits made her incredibly happy. If Sookie suddenly returned to Stars Hollow full-time, it wouldn't make sense for the character. Lorelai and Sookie will always be best friends, but Sookie built a beautiful life for herself and her family based on her passions. Kind of like her portrayer, McCarthy.

If there is a second season of A Year in the Life, no one should be upset if McCarthy decides to sit it out. Sookie was McCarthy's first big break, but as much as everyone loves the character, Sookie was in many ways an extension of Lorelai. She was the best friend, and she did not always get the chance to have her story told on her terms. McCarthy is a certified leading lady now, and her final scene as Sookie certainly felt like she was closing the Gilmore Girls chapter of her life.

A Year in the Life did a lovely job of building up the intimacy of Lorelai's friendship with Michel. If the series returns (again), it can lean into Lorelai and Michel's bond without having Lorelai feel so adrift. The sad reality of life is sometime best friends move away, and you don't get to see them or talk to them everyday. Seeing this happen to Sookie and Lorelai was hard, but it was also relatable — just because a person isn't present in your day to day life does not mean they aren't still your friend.

If talks of reviving the revival get serious and McCarthy decides she is ready for round two after all, I will be over the moon, but if my last image of the character is her reaffirming her friendship with Lorelai at the Dragonfly Inn, I'm OK with that too. The revival was about getting the gang back together, and series creator Amy Sherman-Palladino accomplished her goal. However, if the show has another installment, it doesn't have to feature every character from the past. In fact, it would be best to keep forging onward into the uncertain, but endlessly watchable, futures of the Gilmore women.

Goodbyes are never easy, but McCarthy deserves to move forward, and so does Gilmore Girls. The important thing is no matter what the future holds, Lorelai and Sookie are forever — even if they aren't sharing a screen.