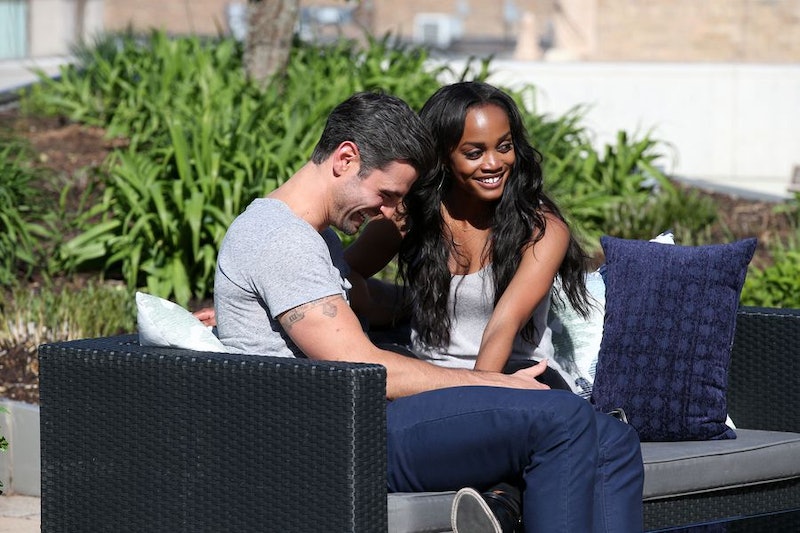 The fantasy suites episode of The Bachelorette ended on an uncomfortable note on Monday night when Rachel said, "I need to be proposed to," and Peter responded, "Nah," and she was like, "Really?" and he was all, "I said, nah!" (I'm paraphrasing.) After that tense discussion, the episode ended with cliffhanger that left fans in the dark as to whether Peter will make it into the fantasy suite where he and Rachel will spend 10 hours discussing how to compromise on the proposal thing, or if she sends him packing because he refuses to get down on one knee and take full advantage of that Neil Lane goodness. Hopefully, Rachel and Peter will work something out, because not only is #TeamPeter the place to be, but because if they do work past such a major roadblock, they could end up with one of the strongest relationships to come out of the franchise.

The way Peter and Rachel have interacted so far — at least what the show has allowed us to witness — has made it seem like their relationship is miles ahead of her relationships with Bryan and Eric, even though Bryan and Eric have both professed their love for her and have no qualms about proposing. While Rachel's relationship with Bryan has consisted of a lot of doubts and even more making out, and her relationship with Eric has involved her challenging him and quite a bit of personal grown on Eric's part, Peter and Rachel have always seemed like they were in the same place.

Even early on in the season, Rachel and Peter talked about real world topics, like whether Rachel can practice law in Wisconsin and their feelings on pooping with the bathroom door open. Then there was that hot tub makeout sesh that showed they have physical chemistry on their side, too — to the point where they left a group date, got undressed, got in a hot tub, dried off, got dressed again, and then came back. That's a lot of time to ditch a group date is all I'm saying.

To witness all that Peter and Rachel have been through (and it's more than career talk, poop, and hot tubs, to be clear) and to see them throw it all away because they feel differently about how proposals work would be "devastating," to steal the description Rachel used on the show. Rachel wants to be engaged at the end of The Bachelorette because she put her life on hold to be there and doesn't want to leave with "a boyfriend." Meanwhile, Peter wants to be engaged eventually, but thinks that doing it on a TV show before you're entirely certain that you will actually marry the person is unnecessary. This is an issue that it is possible to work through, because they do both at least believe in marriage and see it in their futures. Clearly, neither of them wants to budge, but if one of them does, that — more than the actual proposal, even — could really show their commitment to the other person in the relationship.

Every season of The Bachelorette has ended in a proposal, but the track record for these relationships actually lasting isn't great. Currently, five of the 12 couples from The Bachelorette are still together, with three couples married and two still engaged. So, yes, an engagement that occurs only a couple months after the pair meets on a reality show, while one of them is dating several other people, can work. But to go through the experience and not get engaged just because that's how the show works, could be beneficial to a couple's chances of staying together. A couple ending up together because they had a long, real conversation about what a proposal means to each of them and came to a conclusion that involves compromise, or one bending toward the other, could provide a more solid foundation because neither person is simply going through the Bachelorette motions.

We know that Rachel is currently engaged because she has confirmed it in interviews that have taken place since she wrapped filming. This means that if Rachel does choose Peter, that he either decided it was worth it to propose to her on the show or — and this would be unprecedented — waited a little while after filming wrapped and proposed off-camera. Rachel has been very open about how much she loves her fiancé and how happy she is today. Based on her statements, it sounds like Rachel doesn't have any reservations about the man she chose, meaning, if it is Peter, they were able to work out a huge issue in their relationship before even taking to the real world.

And if she didn't choose Peter, perhaps we'll watch him not propose on The Bachelor next season.