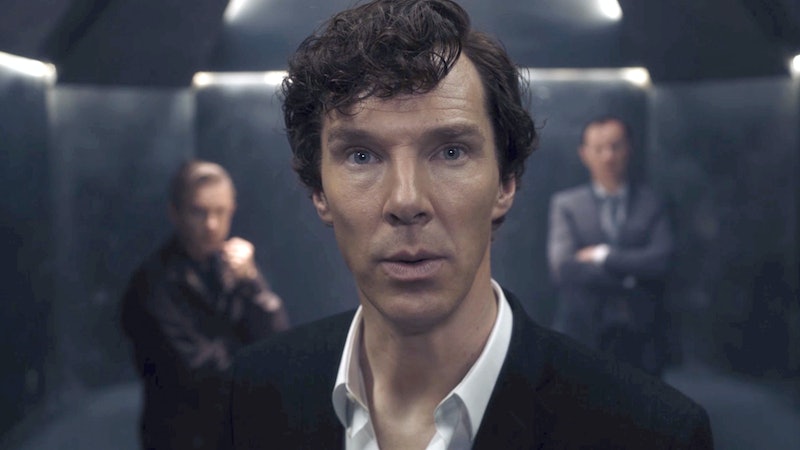 In the most explosive way possible, the last episode of Sherlock Season 4 aired on Sunday night. Fans have long speculated that we would be nearing the end of the highly regarded BBC series. This finale — aptly titled "The Final Problem" — seems to be the, well, the final nail in that proverbial coffin. But, could it be possible that Sherlock won't hang up his deerstalker hat just yet? Or is Sherlock Season 4 the last Sherlock season?

Don't get too excited about figuring out those questions anytime soon. The answers that co-creators Steven Moffat and Mark Gatiss are willing to give us aren't so cut and dry, possibly because they don't know the answers themselves. Or possibly because they take delight in confusing us. Jury's still out. Either way, after a screening of "The Final Problem" last Thursday, Moffat and Gatiss addressed the show's future.

"If this is the last time — and I’m not planning on it to be, but it might be — it is possible that we could end it," Moffat said. “We couldn’t have ended it on any of the previous series because there was what have been great cliffhangers," he continued. Then, Gatiss chimed in, "It may be the final problem, you never know."

OK, first of all, huh? The back and forth is whiplash inducing, but I think what we can gather from such a series of letters and sounds is this: If they have to end the series, this would be a good time to do so. But that doesn't necessarily mean it's ending.

Rumors that this might be the final season began swirling last September, when the man behind the highly functioning sociopath — Benedict Cumberbatch — talked to GQ about Sherlock's future and gave a similar non-answer regarding Sherlock's (possible) demise. Speaking on Season 4, he noted,

"It goes to a place where it will be pretty hard to follow on immediately... I’d love to revisit it, I’d love to keep revisiting it."

Just recently, Moffat shared similar sentiments to Entertainment Weekly. "It’s certainly the first time we’ve ever ended a season thinking, 'If we never come back, this is fine.'" But — yes, there's another but — he then said, "If we want to come back and solve more crimes we can do it, that’s no problem." Essentially, the creators and actors seem happy with how Season 4 tied up. However, if they'd like to, let's say, untie those strings and make them loose again, they have the hands and the ability to do so. That is, in Moffat's words, no problem.

Or let's say they want to begin Season 5 in a completely new place. During the panel, Gatiss explains the first four seasons of Sherlock encapsulate what he believes to be Sherlock and Watson's origin story.

I think what has actually happened is we have now done the story of how the Sherlock Holmes and Doctor Watson that you’ve always known became those men. It’s actually a backstory and we never intended it to be, but the reason to leave it at that place is that actually if we do come back — and we’d love to come back — then we could have it absolutely start with a knock on the door and Sherlock saying, ‘Do you want to come out and play?'

That's as good a place to start as any. Mostly because it's a start, and a start means that Season 4 is not the end, and Season 4 not being the end means that the game is still afoot. Maybe.