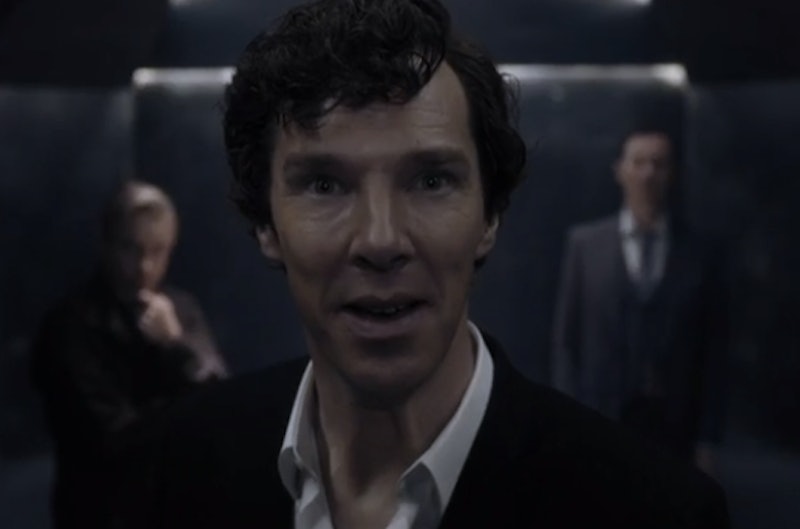 There has been so much speculation throughout Sherlock Season 4, regarding whether or not the series will be back for a fifth season. As stars Benedict Cumberbatch and Martin Freeman have such prolific Hollywood careers now, it's no wonder that it's difficult for the cast to schedule time to make episodes of Sherlock. Despite Season 4's finale of Sherlock, "The Final Problem", tying up several of the show's story lines, the episode was definitely left open ended. So is Sherlock Season 5 happening? Major spoilers for Sherlock Season 4 ahead.

"The Final Problem" was all about Eurus Holmes, Sherlock's long-lost sister, who had been imprisoned since childhood on a secret island called Sherrinford. The episode saw Eurus terrorize her brothers Sherlock and Mycroft, as well as Sherlock's bestie Watson, and it was clear that the secret sibling had a lot of anger to let go of. Most importantly, though, Season 4, Episode 3 showed us that Sherlock and Watson have mended their relationship, with Sherlock even referring to Watson as family. As the famous friends are working together again, and will seemingly be for the foreseeable future, is it safe to say that Sherlock will be back for a fifth season?

The show's creators have remained tight-lipped about whether or not Season 5 of Sherlock will happen. In an interview with Digital Spy in Dec. 2016, creators Mark Gatiss and Steven Moffat discussed whether or not they were finished with Sherlock. Gatiss said, "We've got the keys to Baker Street for a bit and other people will get them, as it should be." Moffatt agreed with Gatiss and said, "Of course, loads of other people will do Sherlock Holmes and we'll be the first people to watch those. But our version is our version." Clearly, the show runners aren't ready to leave the series behind just yet, and the finale made it seem as though there was plenty more story to tell.

Despite the final scene appearing to wrap up the show, with a video clip of Mary Watson calling Sherlock and his partner "My Baker Street boys," and telling them that they will continue to solve mysteries throughout their lives, there are so many questions that have been left unanswered. For one, who keeps sending John Watson those DVDs that feature his deceased wife? Could Mary Watson still be alive, but in hiding?

Another hint in the finale that suggested there will be more episodes was the emotional appearance of Molly Hooper, the registrar from the morgue at St. Bartholomew's Hospital, who has always had a crush on Sherlock. He had to convince Molly, over the phone, to say the words "I love you," which was obviously incredibly difficult for her, as she revealed that she truly does love the detective. Could this mean there might finally be a romance between Sherlock and Molly in the future?

There is also the question of Irene Adler, who was mentioned throughout Season 4 of Sherlock, but never appeared. It certainly seems as though Season 5 would be the perfect vehicle to explore a Sherlock Holmes love triangle. But, for now, whether or not the show will return is a total mystery.