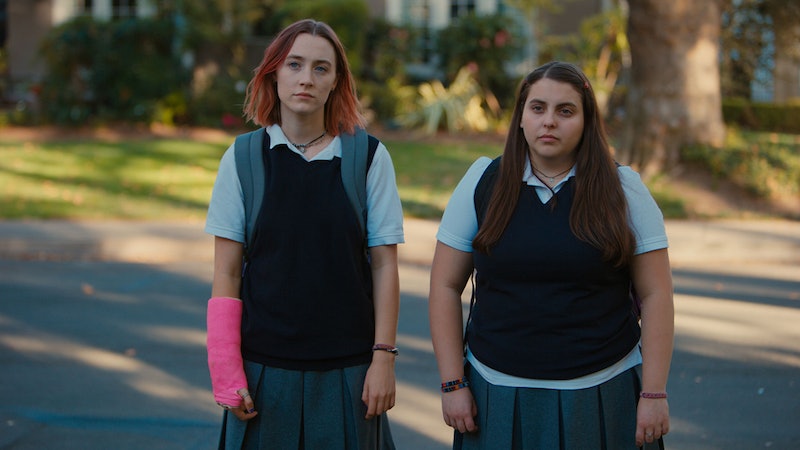 With the Academy Awards coming up on March 4, many people will tune in to see which nominated film ends up bringing home the highest award of the night: Best Picture. With several movies that tell women's stories nominated in the category in 2018, like Lady Bird, The Post, The Shape of Water, and Three Billboards Outside Ebbing, MO, the chances are higher than normal that a film with a female lead could end up with that golden statue. While that'd be reason to celebrate no matter what, the fact that it's been 13 years (!) since a female-led movie won Best Picture makes the possibility even more exciting, if also seriously depressing.

The last time a Best Picture winner focused on a woman's story was way back in 2005, when Million Dollar Baby took home the prize. In the years since, the films that have won the honor have all been primarily about men, such as Moonlight, Birdman, 12 Years a Slave, and The King's Speech. While ensemble pieces like Spotlight and Argo and romances like The Artist include women, they can't really be called female-centric, since men take up equal or more screen time.

The lack of female-led winners in the category isn't for a lack of female-led movies being nominated. In the last 10 years, films like Arrival, Hidden Figures, Room, Mad Max: Fury Road, Brooklyn, Philomena, Gravity, Beasts of the Southern Wild, The Help, Black Swan, Winter's Bone, and The Kids Are All Right have all made appearances on the Best Picture nominees list. But they haven't won the top prize, and perhaps part of that is due to the makeup of the Oscars' voting body. The Academy of Motion Picture Arts and Sciences still consists mostly of men, despite recent additions to membership, and it's possible that men vote more for the movies that they connect with, i.e. have male leads.

Of course, this might not be the case, but it's certainly a possible factor in the striking lack of Best Picture winners about women. Whatever the reasons, though, 2018 could mark a change. There are four women-centric stories nominated for Best Picture this year, all of which have a real shot at taking home the prize.

Lady Bird is the coming of age story of a teen, played by Saoirse Ronan, as she tries to navigate friendship, popularity, sex, and the world beyond high school, while simultaneously working through her fraught relationship with her mother. Steven Spielberg's The Post is both a historical drama about the Pentagon Papers and a tale of a woman finding her voice in a man's world. Meryl Streep stars as Kay Graham, the owner of the Washington Post, whose worth and abilities as a female executive are constantly questioned by the men around her.

Then there are The Shape of Water and Three Billboards Outside Ebbing Missouri, both front-runners for Best Picture. The former follows a mute cleaning woman in the 1960s whose forbidden love of a captive sea creature-type man reflects the era of Civil Rights and discrimination in which the film is set. And Three Billboards, while controversial with its takes on racism and misogyny, hinges on the character played by Francis McDormand. The movie's emotional center is the pain Mildred feels over the violent loss of her daughter.

We'll have to wait until Sunday to see if any of these films manages to capture the coveted Best Picture prize. Right now, Three Billboards is the one that appears most likely to win, having nabbed the major prizes at the Golden Globes and the SAG Awards. But The Shape of Water took home top honors at the Producer's Guild Awards, so it could sneak in and take home the award instead. If either of those films win, or if it's Lady Bird or The Post, the male-centric streak will finally be busted. Let's just hope we don't have to wait another 13 years for the next female-led movie to win top honors.

More like this
What’s New On Netflix: Lana Condor’s Ghostly Comedy & A Sexy Reality Series
By Arya Roshanian
Kimberly J. Brown & Daniel Kountz Looked Back On Their ‘Halloweentown’ Romance
By Stephanie Topacio Long
All The Sneaky Lindsay Lohan Movie Easter Eggs In Her New Ad, Explained
By Stephanie Topacio Long
Anne Hathaway’s ‘The Devil Wears Prada’ Anniversary Post Turned Political
By Brad Witter
Get Even More From Bustle — Sign Up For The Newsletter