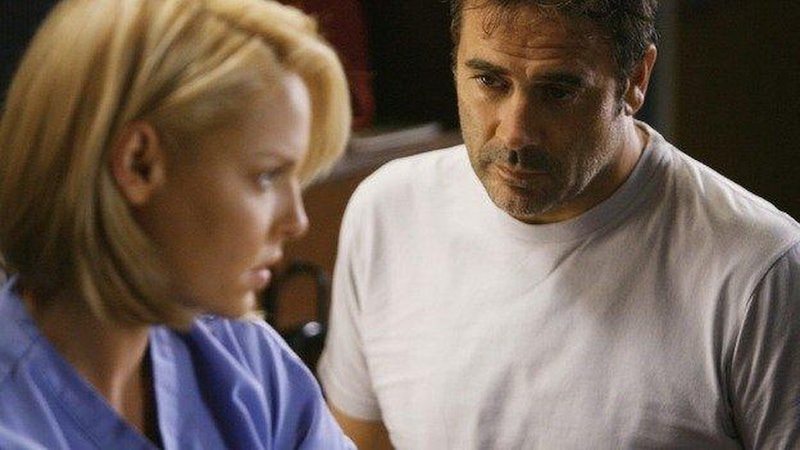 Look, before we begin, I think I need a disclaimer — I have stuck with Grey's Anatomy through everything, and will continue to do so until Shonda Rhimes eventually decides to call it quits. There is nothing the show has thrown in me in 14 seasons that I haven't taken, and it's thrown a lot: plane crashes, bomb threats, two people stuck together by a pole, you name it. Because I love this sweet, ridiculous show to pieces, I'm not exactly unbiased when it comes to calling out its faults. With that said, I know this next sentence might raise a few eyebrows, but I stand wholeheartedly by it: the Grey's Anatomy ghost sex storyline wasn't actually as bad as you remember.

I know, I know. You're thinking something like, "Are you kidding me?! Did you watch the same Season 5 — you know, the season where an hallucinating Izzie thought she was actually having sex with her dead ex-fiance — as I did?" Yup. I did. And I'm completely aware that many people hated this storyline, going so far as to quit the show over it and never come back. But the thing is, I've been watching Grey's Anatomy since I was in middle school; I was 12 when Season 1 premiered back in 2005. Having been a fan of the series for nearly half my life, I know awful plot-lines when I see them. That weird little girl in the ferryboat crash? Check. Derek getting hit by that car? Mhm. The plane crash that killed Lexie and later Mark? Seriously messed up.

Not ghost sex, though.

While Izzie and Denny's "reunion" certainly ranks on the lower end of the myriad plot-lines that've aired, to call it the worst ever, like so many people have, just isn't right. In fact, I'd even argue that the storyline is pretty damn OK.

Yes, at the time the 2009 episodes aired, I eye-rolled just as hard as the rest of you. But time has passed. I've grown up. I've seen a lot of TV. And having recently re-watched Season 5, I can confidently say that while the ghost sex plot was certainly silly and forced, it's not really that all that horrible. Let me explain by giving you some context. By Season 5, Grey's was in a tough place. It was still smart, compelling, and highly-rated, but it'd lost much of the sheen that coated its earlier years. Meredith and Derek had gotten together, Cristina had met Owen, and with the exception of a few doctors' parents and loved ones, not a whole lot of characters had died. In other words, things were, well, fine at Seattle Grace — meaning that if the show wanted to keep things interesting, it needed to shake things up.

So it did, by giving Izzie cancer. While there's a lot that can be said about the questionable medical accuracy of her treatment, the storyline was, for the most part, well-done. Although Katherine Heigl might not have considered the material "Emmy-worthy," she delivered a moving performance as the scared, vulnerable Izzie all season long. And the arc also allowed for Alex, dealing with his girlfriend's possible death, to show up more complicated sides of himself than viewers had previously seen. And then, of course, there was the not-to-be-missed sight of Meredith in a poofy white dress.

And then there was Denny. There's no denying that the ghostly re-appearance of everyone's favorite LVAD patient was weird, but bad? Not really. It was a delight to see Jeffrey Dean Morgan return, and for him to interact with Heigl once more. There's a reason that Izzie and Denny's Season 2 romance is often cited as one of Grey's best ever — the duo had really, really good chemistry. And, as ridiculous as this might sound, that stood true even when one party was dead. Literally.

The storyline deserves your respect for more than just the characters' revived relationship, though. Izzie's struggle to figure out what was wrong with her was genuinely heartbreaking; the moment she finally realized that it was cancer was even more so. (And don't get me started on that painful, silent scene in which she told Cristina what was going on. Sandra Oh deserved an Emmy nod just for her reactions alone.)

But OK, back to ghost sex. Yes, Grey's could've lived without the scene of Alex and the others listening in on Izzie's bedroom antics and cheering her on for seemingly "going solo," but the fact that a primetime TV show featured a female character's masturbation was, and still is, a pretty big deal. And in defense of Izzie, if your sexy dead fiance had decided make a very naked re-appearance, would you really say no? Besides, getting to be with Denny again, if only for a brief while, gave Izzie the closure she needed after his sudden, tragic death. We all saw how broken she was after his stroke; even though she'd found happiness again with Alex, she never fully recovered. She missed Denny desperately, and understandably jumped at the chance to reunite.

And it's not like we had a whole season of ghost sex, anyway. While Denny was there for most of the season, he and Izzie only fooled around for a few episodes. The rest of her time was spent questioning his presence, trying to get him to leave, or focusing on her very alive boyfriend, Alex. Izzie's cancer should be what defines her Season 5 storyline, not her sex life. And I'm not the only one who think so; BuddyTV reports that back in 2009, former ABC president Steve McPherson called the Denny plot-line "insightful and smart," noting the "dynamics it's creating for the characters involved" as a benefit. Shonda Rhimes, meanwhile, dismissed the ghost sex criticism, telling EW that same year that the producers "let everything roll off our backs."

But alas, fans are still fixated on that storyline. When people think of Izzie getting sick, they think of ghost sex. They roll their eyes and cringe, calling it the moment Grey's jumped the shark and bragging about how they stopped watching the show after it happened. To them, I say, go ahead. Brag away, because loyal fans know that in the grand scheme of Grey's, ghost sex was really NBD. And if you stopped the show because of it, then you missed out on some seriously great plot-lines and character arcs that've kept viewers captivated for 14 seasons and counting, from the Season 6 shooting to the #Japril romance to Cristina and Meredith's moving, enduring friendship.

Ghost sex may have been a bump in the long, windy road that's been Grey's, but calling it the worst storyline ever is not only wrong, it's disrespectful to Rhimes, Heigl, and everyone involved. And that includes dead Denny.