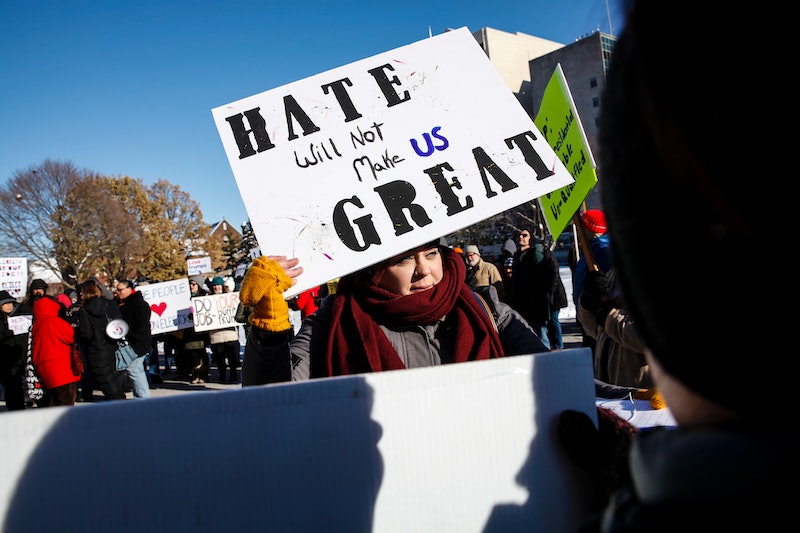 Over the last six months — and possibly longer — anyone who has lived through something traumatic has probably had a bit of a rough time. After a presidential campaign season that triggered many survivors of sexual assault, terrorism, and mass shootings, Donald Trump's upcoming inauguration may feel like a march to doomsday for some of the 25 million people living with Post Traumatic Stress Disorder (PTSD) in this country — as well as the people who care about those survivors. And that might lead some to attempt to self-medicate.

This election season has been especially trying for many women with PTSD. For example, Slate reported that the weekend after a tape was leaked wherein now president-elect Donald Trump laughed about grabbing women "by the p*ssy," the Rape, Abuse, and Incest National Network noted that it saw a 33 percent increase in people turning to its National Sexual Assault Hotline for support, and traffic to the group’s website was up 45 percent.

And the upcoming inauguration may be making many women with PTSD feel pushed to their limit. Women don't just account for a large percentage of PTSD sufferers — they are also the fastest-growing population of alcohol and drug users in the United States. And so, for many women with PTSD, the temptation to self-medicate in the face of our current news climate can feel overwhelming.

But self-medicating to deal with being triggered isn't just a bad idea because it's destructive; a new study found that drinking to cope with traumatic memories might actually make them worse. The study, conducted on mice at John Hopkins University, found that alcohol strengthens emotional memories associated with fearful experiences, and that consuming alcohol prevented the mice from pushing aside their fears.

“Binge drinking or other attempts to use alcohol to self-medicate could be sabotaging any therapy efforts," concluded Norman Haughey, one of the project researchers, in a statement. Essentially, if you are struggling with PTSD and you drink now, you could be self-sabotaging.

Being triggered by the election is a phenomenon that to this day remains unprecedented—as Bronx-based trauma therapist Kristen Slesar told Slate, she saw a clear correlation between the uptick in calls and requests for emergency crisis sessions and her clients reporting, "Increased flashbacks, increased feelings of anxiety and fear, an increase in nightmares, increase in intrusive imagery and thoughts about the abuse or assaults they’ve experienced, things like being afraid to go outside more than usual.”

Trump's ominous lurking behind Hilary Clinton in the second debate didn't just anger those of us who were outraged at the intimidation tactic we perceived him to be employing; it undoubtedly brought up some very upsetting thoughts for many who have actually been looking over their shoulder in fear for years.

But this is not a story about Donald Trump, or personal political allegiance. Because no matter who you voted for, if you've experienced trauma, it may now be resurfacing in a big way. This is a story about why it's important to take care of yourself now more than ever, when so much feels like it's out of your control.

While we are slowly raising awareness — much more slowly than I personally would like — about the prevalence of PTSD among Americans, we definitely still need to raise more awareness around the fact that addiction and alcoholism affects more young women with PTSD than you'd think; it's not just veterans with PTSD that suffer from the affliction.

Which is why making sure that people know about the connection between traumatic memories and drinking is so important. In the rooms of recovery, we come to find that most of the time, while drinking usually seems like a great way to put your worries on the shelf for a few hours or let loose and shake off your stress, more often than not, it just makes things even more stressful the next day. The prevalence of binge drinking and addiction is statistically much higher in people with PTSD, which means that if you suffer from PTSD and are drinking to cope, you are likely not going to have one glass of wine and stop. You're probably going to go hard, wake up with a hangover, make some dumb decisions, and, unfortunately, all of your old feelings and concerns are still there, along with whatever you may have done to make things just a little bit worse in your life.

Chances are, if you’re playing that drinking game during the inauguration or partying til 2am and drinking more then you usually do, you are not thinking of yourself as drinking "to forget." That feels like a dated term, something we'd use when discussing older people doing hunched over their beer in a dive bar, not young people partying at fabulous lounges.

But it can apply to behaviors that don't fit the stereotypes. At 22, with several years of successful behavioral trauma therapy under my belt, I realized that I was still finding myself massively triggered, or stuck, or having episodes when I wasn’t sober. As much as things were getting better, at times they were getting much worse.

Living with PTSD, whether or not you’re in recovery and regardless of how far along you are, means that you experience certain triggers, cues from the world around you — a sound, a smell, something that someone says, a memory, a video clip, a physical feeling — that cause you to become anxious, hyper-vigilant, and most of all, afraid. To make it worse, it can make you feel absolutely powerless over everything, even though, as the feeling grows, you can’t shut it off and you want to stop it. These triggers can be excruciating, at times, even while you may feel like you're doing a good job of remaining calm.

As the National Center for PTSD notes, "'Getting better' means different things for different people," but most agree that to successfully find recovery from PTSD, it's essential to find a way to process the past. At the end of the day, trauma is a crazy train driven by fear, and strengthening those memories could make things worse and worse, until you find yourself in a spiral so severe that you may not be able to climb out.

The last thing you want to do is make things worse for yourself, and yet, because this is such a scary time, it’s tempting.

As PTSD sufferers, our biggest challenge can be just feeling safe, and for many, that is a feeling being more largely threatened by the day. People are saying bad things are going to happen. Some bad things are already happening.

If you’re already in recovery from both or either of these issues, pull on your supports. Limit your exposure. Focus on the good things you can do in your own life and the good you can put out into the world. Turn the TV off. Skip that article in the newspaper. Steer clear of bars. This impulse to find relief is not going to relieve anything in any real way.

If you notice that you’re more inclined to drink this week, that you’re more anxious this week, that you’re having intrusive thoughts you don’t want or nightmares you can’t stop, please consider looking into these feelings. Consider trauma targeted therapy like Cognitive Behavioral Therapy (CBT), Dialectical Behavioral Therapy (DBT) or Eye Movement Desensitization and Reprocessing (EMDR), consulting a therapist who specializes in addiction, or attending a local 12-step meeting just to be in a safe place where you can anonymously share exactly what you’re feeling and find support and women who relate.

Trauma expert and author Dr. Jasmin Lee Cori asserts that while addiction is an "exceedingly common response to trauma," we need to be able to retrain ourselves to not respond to environmental and physiological triggers that keep our arousal going. Otherwise, we're being controlled by our knee-jerk impulse to engage in our "preferred substance or activity."

"We need to unplug our automatic response to these cues, which these therapies are able to do," she tells Bustle. "What so many of these therapies have in common is some way of interrupting a pattern...and when we do that, we create the opportunity for our experience to change."

If you are feeling hurt, the worst thing you can do is hurt yourself more in the long run in exchange for something temporarily soothing or comforting. At a time when it seems like so much is out of our control, there is one thing you can take care of, and that is your own mental health.