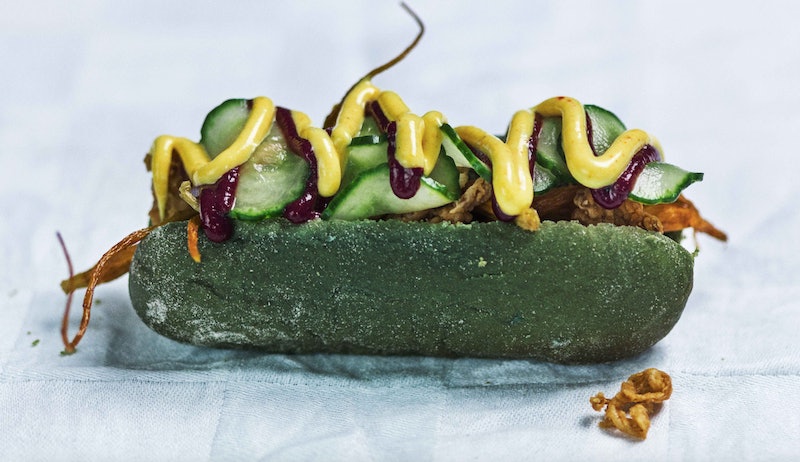 Well, my Swedish ancestors certainly have come a long way since that whole conquering-and-pillaging thing, if IKEA's latest strides in eco-friendliness are any indication. Two years ago, the company came forward with its "secret innovation" lab, dubbed Space10, in Copenhagen; at the time they wrote about plans for "Tomorrow's Meatball," which would explore ideas like lab-grown meat, algae harvesting, and even the possibility of 3D food printing. In a post on Medium on March 9, Space10 revealed just how far it has come since — and it looks like IKEA may be selling bug burgers and meatballs a heck of a lot sooner than you think.

In fact, Space10 has tackled five new dishes that promise to be game changers (if not hair raisers for the more traditionally-inclined foodies among us). While you may have gone so far as to sample cricket tacos during their brief time in the sun in 2015 and have the Instas to prove it, Space10 has gone above and beyond to create food that isn't just "healthy or sustainable," but also tastes good.

The first among them is the "Dogless Hot Dog". The ingredients of the "dog" part aren't all that out of the ordinary, including a mixture of veggie items and an inventive ketchup and mustard. The bun, on the other hand, is bright green, and made of a micro-algae called spirulina — which, according to Space10's post, has 50 times more iron than spinach. (Somewhere Popeye just rolled over in his grave.)

Perhaps a bit more tantalizing is the "Bug Burger," which has a patty made of beetroot, potato, parsnips, and, uh, mealworms. Specifically, the "larval form of a darkling beetle." Coming in hot is also the "Neatball," also made with mealworms, which is served "with mashed potatoes, gravy, and lingonberry sauce" in true Swedish tradition.

They also developed the "LOKAL Salad," made of three different hydroponically-grown microgreens — which is a fancy way of saying they grew them in a basement, using nutrient-rich water without any soil. Their "Microgreen Ice Cream" takes advantage of the same microgreens, and comes in fennel, coriander, basil, mint, or a combination of flavors, depending on what floats your ready-to-assemble boat. Last but not least is their version of the Popsicle, made with hydroponically-grown "woodruff, coriander, Spanish chervil and sorrel."

The images previewing the foods are all available on the Medium post, and they are, dare I say, quite appetizing. If you're balking at the idea of eating bugs, though, you may want to consider that the U.S. is actually late to the game in terms of modern bug consumption, according to National Geographic; we've eaten bugs throughout history, and many cultures and as many as two billion people still eat bugs as a staple in their diet today. Considering it's more sustainable and bugs are actually quite rich in protein, this is definitely something you shouldn't knock before you try it. In fact, the U.N. released a report in 2013 encouraging people to eat more bugs in an effort to fight world hunger.

Of course, it may be awhile before we see any of these actually sold in IKEA stores — for now, though, they are glimpse at what the future of food could look like, if we press a little further beyond the fare we're used to eating. In the meantime, the IKEA Veggie Hot Dog that started testing a month ago will very much available for consumption in European locations August, and IKEA cafés all offer vegetarian and vegan options on their current menus. Sounds like as good a time as any to hop on that new IKEA homeware line that Beyoncé's stylist crafted, eh?