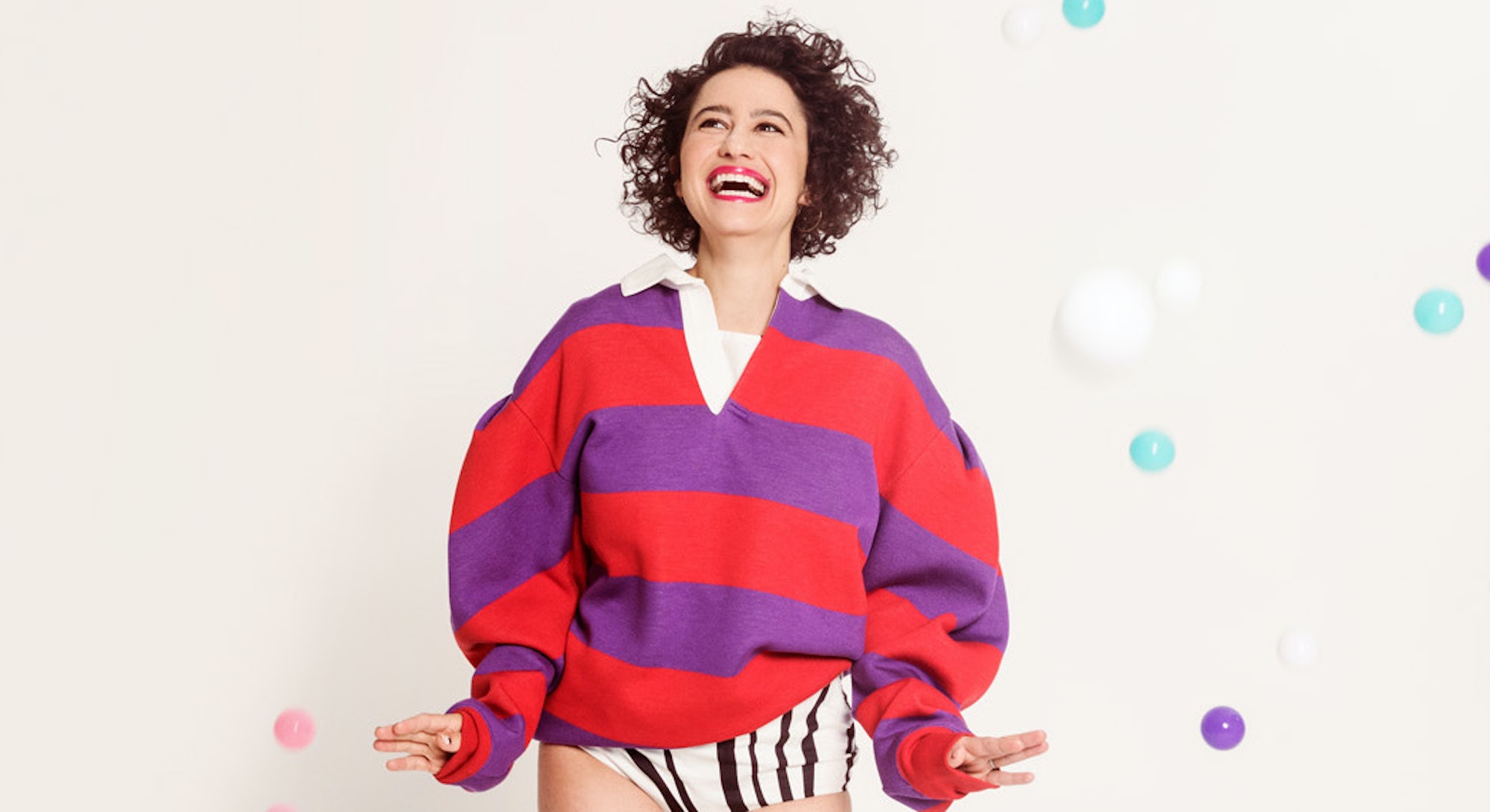 You probably think you know Ilana Glazer. She has that effect on people. So if you’ve thought of her as your best friend in your head, join the club. Having shared her real-life friendship with Broad City co-star and co-creator Abbi Jacobson with us for three years on Comedy Central (and a few years before that on YouTube), Glazer has offered up quite a bit of her real self to audiences.

Women who love Glazer and her show often feel connected to this woman she's shown them, someone who offers a grounded, honest, and realistically weird representation of female friendship that is frankly pretty rare. And now, with her role as one of five best friends reuniting for a bachelorette party weekend in Rough Night — a comedy co-written by her Broad City co-workers and friends Lucia Aniello and Paul Downs (Aniello also directed the film) — that window into what it might be like to hang with Glazer in real life isn't closing. But if you think that to love Glazer’s work is to know her, you’re only half right.

“I always want to be transparent and vulnerable with my characters, you know. I always want to put myself in whatever I’m working on in a real way. So I do feel like people kind of know me,” she says when we speak on a gloomy afternoon in May. Glazer is suffering from seasonal allergies, but when I ask about how fans react to her, her sniffles seem to disappear and her speech quickens. “You know, younger people think — they’re surprised at kind of how calm and also how tired I am. Like, I’m exhausted all the time. I’m very [sleep] deprived. So, like, I can’t really match [their expectations], and I think also people forget in the moment that there’s one of me and many of them … they couldn’t know what it feels like, but I kind of know what it feels like to be them, and also they get me, you know?”

I do feel like people kind of know me.

Considering how boisterous and brash her beloved TV alter ego is, it makes sense that people are surprised when they meet Glazer in real life and she’s not jumping to shout congratulations for brazen sex acts or offering them a hearty “Yaas queen” with a side of shoulder shimmy. In fact, when she arrives at Milk Studios for our photo shoot, Glazer is tranquil and reserved. She’s quietly kind to everyone around her, but keeps her energy at a hush until she hops in front of the camera. Then again, expecting the writer and actor to always behave like her onscreen persona is sort of like asking any random comedian to tell you a joke when you run into them at a coffee shop. (Pro tip: Do not do this).

Perhaps that unrealistic expectation is why Glazer seems to struggle a bit with the fact that her fans feel so close to her. She chooses each word carefully as she elaborates.

“I try to just keep a secure sense of self and a secure sense of my boundaries and what I feel comfortable with,” she continues. “People always want to touch me and hug me and that bothers me ... like, because I’m 5’1, that’s another reason people feel like they can touch me, and that I hate. That really feels disrespectful. But again, I get it ... People just open their arms and it’s such a beautiful thing to me, like, what a gesture. And for me, sometimes it feels right and sometimes it doesn’t.”

But the expressions of adoration probably aren't going to stop any time soon, with the addition of her latest role in Rough Night, which hits theaters June 16. The film follows five best friends from college (Glazer, Scarlett Johansson, Jillian Bell, Kate McKinnon, and Zoe Kravitz) on a bachelorette party weekend in Miami. It’s a dark comedy and things quickly take a turn for the worst, leaving the drunken pals to deal with the aftermath of an accidental murder, but at the heart of the film is much of the same core that fans gravitate towards on Broad City: realistic, strong, complex, and sometimes totally messed-up female friendships. It's something that we simply need more of in a media landscape that often doesn't offer true representation of the complex and essential relationships between women.

Yes, Rough Night, which centers around Johansson’s type-A politician character, Jess, has that whole accidental murder as its central plot point. It's a storyline that had the film in hot water when the trailer was first released, because it appears that the women kill a sex worker in order to create a comical setup for the film (it's more complicated than that, but I won't go as far as spoiling the movie). Despite the criticisms, Glazer is more focused on the friendship dynamics at play: "I really just like seeing all these different stages, different possible stages of friendship at this age."

Glazer is referring to the dynamics of the 30-something friend group in Rough Night. There’s the thinly veiled jealousy that can crop up between newer friends and older friends (enter Bell’s Alice, who’s known Jess for eons, and McKinnon’s Pippa, who knows Jess from a study abroad semester). There are the former romantic partners experiencing a possible rekindling while everyone else makes bets on how long it takes them to get back together (Glazer’s Frankie and Kravitz’s Blair). There are the dorky traditions being kept alive by one very persistent member of the group (human friendtipede photos, ‘sup). And while Glazer hasn’t known this group of onscreen friends as long as she’s known Jacobson, according to the actor, we’re seeing real friendships play out onscreen.

“Because we all came to the table excited to meet each other, excited to get to know each other better if we had met ... there was, I think, a genuine thing going there, and we, like, really did become good friends on set and in different combinations and in different ways,” she says. “It was well-cast too, like everybody really fit. Scarlett really is, like, good at politics. She just follows it and has opinions and knows, like, she really could run for something and might get elected. And Zoe seems the furthest from her character, but we would be cracking up constantly … the chemistry between us is real because it’s kind of unfolding on screen.”

That warm, fuzzy sense of friendship may seem borderline cheesy to belabor, but there’s real weight to accurate representation of the ways women interact with each other. As Rebecca Traister wrote in her 2016 New York Times column on why women may get more from female friendships than they do from romantic love, “Female friendship has been the bedrock of women’s lives for as long as there have been women.” The notion seems obvious, but when it comes to the film and television industries, it apparently hasn’t always been so easy to see. We hang on so closely to the few realistic examinations of female friendship that we have — things like Thelma & Louise, Bridesmaids, Mean Girls, Girlfriends, and Sex and the City were, for so long, the sparse smattering of examples of the relationships that all women experience every day of their lives. Those beloved stories are often separated by years, while depictions of male friendships are a dime a dozen in the — you know where I'm going with this — male-dominated film & TV industries. You can’t throw a stone without hitting 29 or so iconic male friendships on the big screen.

So when it does happen for women, and it’s captured well, that onscreen friendship can feel like magic. It’s why women gravitate toward celebrity best friends so ardently (see: the obsession with Taylor Swift’s many besties, Busy Phillips and Michelle Williams’ years-long relationship, and the women of Girls) and why, even with some of the early criticisms lobbed at Rough Night, its debut is so exciting. The film gets at the weird, awkward, infuriating, raunchy, non-PC elements of friendships that are still somewhat rare on screen. And Glazer knows how important that is.

Glazer has clearly thought about this a lot (she’s also spoken about it on panels and in interview after interview). And seeing her helping to lead this charge, with her series and her role in this new film, is exciting for women who are clamoring for more friendships to relate to (see: most women). It adds another layer of perceived sisterhood for those who adore her work — not only does this woman “get it” when it comes to delivering #relatable jokes, but she gets why it matters that she’s bringing those jokes to her female viewers.

“I love making stuff where you see [women] portrayed so dynamically that it makes you realize how flat portrayals of female characters have been in the past — that’s, like, the best,” she says.

It just so happens that what comes with "the best," is a whole legion of besties who Glazer doesn't necessarily know. Luckily, she's ready to take on that responsibility.

"I guess it’s kind of, like, a lot of work to maintain balance in this bizarre and extreme situation, but I think it’s worth the work." She says it's "amazing" to walk around New York and have people greet her with that warmth wherever she goes. "A drive-by, a drive-by blowing the kiss or a drive-by wave, is, like, my favorite, I’ll just put that out there," she says. "That’s like a divine gift."

She adds that this preferred interaction helps balance out the folks who sneak creepy photos of her without her permission or those who invade her personal space and touch her hair without asking.

"All I really can do is, like, observe it, and just remember that I’m, like, a vessel for something and it’s not even really about me in a way," says Glazer, and she — like so many of her adoring fans — is only half-right.