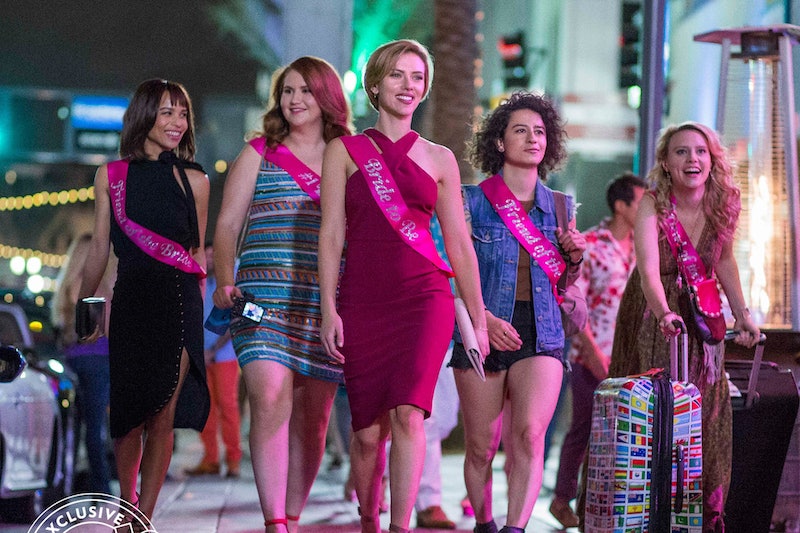 With all of the discourse surrounding the lack of women working behind the scenes in Hollywood, you'd think the industry would take note and employ real change. But according to The Center of the Study of Women in Television and Film, the number of women working behind the camera has remained the same since 1998. That's a hard pill to swallow, and Jillian Bell, star of Lucia Aniello's Rough Night, agrees. You see, Rough Night, in theaters June 16, is the first R-rated film coming from a big studio like Sony to be directed by a woman in two decades. But according to Bell, blockbuster comedies helmed by women should be the norm.

"That is insane," Bell says, shaking her head at this realization. (Bustle teamed up with Sony to host a special advanced screening of the film in New York and Los Angeles, and I sat down with the star before the LA showing for a chat.) "It’s shocking. I’m sad that that’s the reality," she says. "Hopefully this movie will open doors for a lot of other women."

It's obvious that Bell thinks more comedies — and more films across the board — would benefit from being steered by a female director. "Women in general are very layered human beings. Women bring a specific perspective to whatever they're doing — especially for comedies," she says. "But we're always walking that fine line. If it's too girly men might not relate to it, but if it's too over the top women feel like we're acting like men. Rough Night is a balance of both. I think there are moments that are super feminine, moments of girl power, and moments that are genderless."

Her hope is that enough women will eventually be involved and embraced in all aspects of the comedy world that it will make conversations such as these irrelevant. "It's hard. You want to speak up about it... women are funny and they should be out there more. This is a big moment, we should address it. I think it's a difficult question to have to ask and to have to answer. I hope we move into an era where a comedy is just a comedy."

Rough Night is certainly guiding the discourse in the right direction. The film — about a group of friends who go to Miami for a bachelorette party that takes a dark, terrible turn — has a predominantly female cast, and is, as established, directed by a woman. And according to Bell, being surrounded by fellow women made the experience of making the film all the more enjoyable.

"We were having a great time the whole time shooting it. It was really fun to have a cast made up of women and a female director. We were sort of letting loose the whole time."

With female-helmed films proven to perform robustly at the box office (when given the chance, that is), giving more women a shot seems like a no brainer. Rough Night may be the first R-rated comedy directed by a woman this century, but it sure as hell shouldn't be the last.