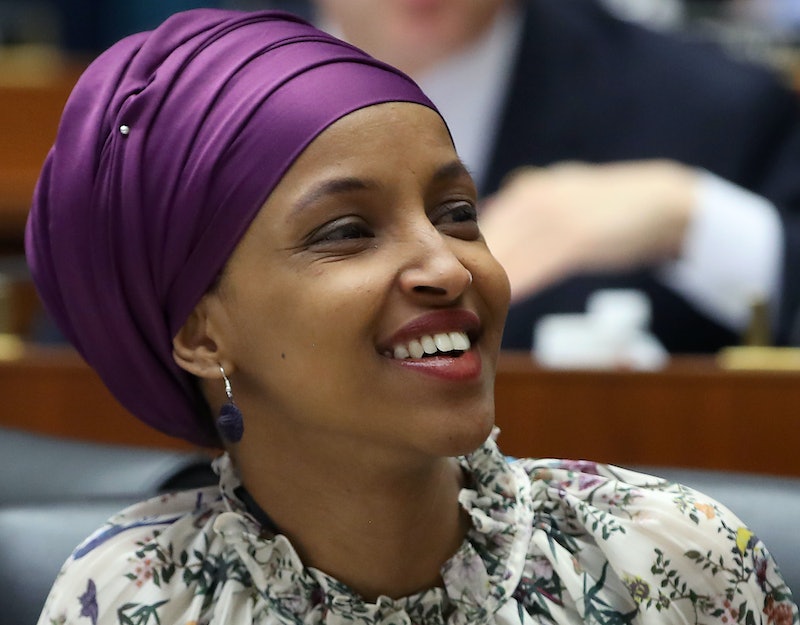 In the wake of two deadly terrorist attacks on mosques in New Zealand, one freshman Congresswoman has accused President Donald Trump of "fueling hate against Muslims." Rep. Ilhan Omar claimed Trump's anti-Islamic rhetoric was behind a rise in white supremacist and anti-Muslim attacks. Bustle has reached out to the White House for comment.

Speaking Saturday at the Council of American-Islamic Relations of Greater Los Angeles' annual banquet in Woodland Hills, California, Omar argued that Trump's anti-Islamic rhetoric was causing violent attacks against Muslims to rise. "We all kind of knew that this was happening," Omar said, in reference to threats and violence made against Muslims and Muslim communities such as the Christchurch mosque shootings in New Zealand. "The reason, I think, that many of us knew that this [violence] was going to get worse is that we finally have a leader, a world leader, in the White House who publicly says 'Islam hates us.'"

The Minnesota representative went on to claim that President Trump is a leader "who fuels hate against Muslims, who thinks it is OK to speak about a faith and a whole community in a way that is dehumanizing, vilifying." She also characterized the president as being someone who either didn't understand the consequences his words might have, or "at least makes us want to think that he doesn't understand" the consequences.

"He knows that there are people that he can influence to threaten our lives, to diminish our presence," Omar said. "But what we know and what Islam teaches us and what I always say, is that love trumps hate."

While campaigning for the presidency in March 2016, Trump told CNN's Anderson Cooper that he believed "Islam hates us."

"There's a tremendous hatred. We have to get to the bottom of it. There is an unbelievable hatred of us," Trump said. "We have to be very vigilant, we have to be very careful, and we can't allow people coming into this country who have this hatred of the United States and of people who are not Muslim."

More recently, Trump appeared to downplay the threat of white nationalism in the aftermath of a terrorist attack on two New Zealand mosques that left 50 people dead. When asked by reporters last week if he thought white nationalism was a rising global threat, Trump demurred. "I don't really," he said. "I think it's a small group of people that have very, very serious problems."

In February, however, The Southern Poverty Law Center reported that the number of hate groups in the United States had reached a record high in 2018. The legal advocacy nonprofit identified 1,020 hate groups operating in 2018, a 7 percent increase from the 954 groups counted in 2017. The Southern Poverty Law Center claimed 2018 was the fourth consecutive year of growth among hate groups, representing an overall increase of 30 present that they argued coincided with Trump's 2016 campaign and presidency.

"The numbers tell a striking story – that this president is not simply a polarizing figure but a radicalizing one," Southern Poverty Law Center Intelligence Project Director Heidi Beirich said in a statement released at the time of the report. "Rather than trying to tamp down hate, as presidents of both parties have done, President Trump elevates it – with both his rhetoric and his policies."