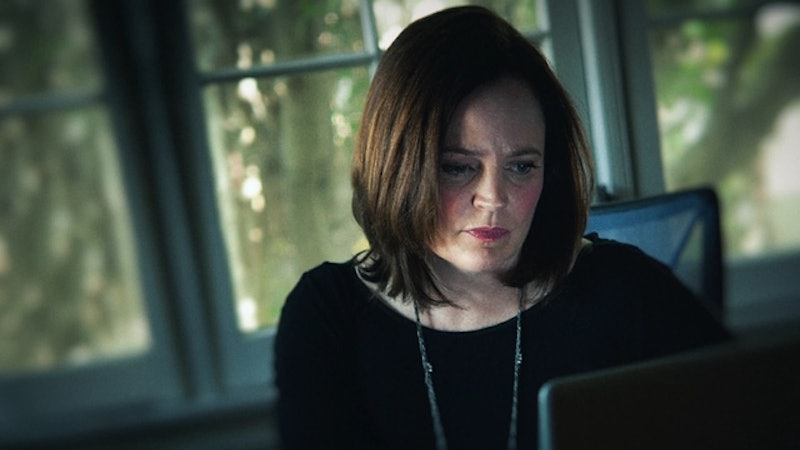 HBO's new docuseries, I'll Be Gone in the Dark, pieces together late author Michelle McNamara's investigation into the Golden State Killer. The wife of actor and comedian Patton Oswalt, McNamara was a true crime enthusiast who started the blog True Crime Diary in 2006 to discuss and revisit cold cases with fellow armchair detectives.

It was the case of the Golden State Killer that bothered her the most. He raped and killed dozens of women in California between 1974 and 1986, striking in different counties and barely leaving any evidence. McNamara's research on the case grew into an obsession, and put her in contact with numerous victims and police departments involved.

"Eventually the police started listening to her. She was bringing them together," McNamara's colleague Bill Jensen told CBC. "Because even though there was a lot of evidence, it wasn't centrally located because [the killer] was doing it in so many different jurisdictions."

Sadly, McNamara wasn't able to finish her book; she died unexpectedly on April 21, 2016 at the age of 46 due to a combination of drugs in her system and an undiagnosed heart condition. Per The New York Times, writing I'll Be Gone in the Dark had taken a psychological toll on the author, leaving her stressed and emotionally frayed. "There's a scream permanently lodged in my throat now," McNamara wrote in the book.

Shortly after her death, Oswalt, Jensen, and Paul Haynes, who worked closely with McNamara as a researcher, combed through her handwritten notes and 3,500 files on her computer to finish the book. It went on to become a New York Times best-seller.

Two years after McNamara died, the Sacramento police arrested 72-year-old Joseph James DeAngelo, a former cop whose DNA matched that of the Golden State Killer. (DeAngelo's trial is still ongoing, but he has offered to plead guilty). When asked if McNamara's work helped to catch DeAngelo, Sacramento County Sheriff Scott Jones told reporters that it hadn't, but "it kept interest and tips coming in."

In response, Oswalt tweeted, "It did, but Michelle McNamara didn't care about getting any shine on herself. She cared about the Golden State Killer being behind bars and the victims getting some relief."

Criminalist Paul Holes from the Contra Costa Sheriff’s Office worked the case for years and told Vulture that solving the case could be credited "in no small part" to McNamara. "She had the freedom to call anyone she wanted — victims, witnesses, original investigators across various jurisdictions. Michelle talked to people that I hadn't and found out details that weren't written in the case files, and she would pass those on to me."

Jenson pointed out to CBC that it was McNamara who coined the nickname Golden State Killer, and her work "promoted the case into really popular consciousness." It also helped that she was the wife of a well-known comedian, he said, which further drew eyes to her work.

Ultimately, HBO's adaptation serves as a fitting homage to McNamara, her work, and her endless search for justice for the victims that others might have otherwise forgotten.

More like this
'Dune: Part Two' Could Include A 'Little Women' Reunion
By Arya Roshanian and Alyssa Lapid
Everything To Know About True Detective Season 4
By Brad Witter
'Succession' Season 4 Could Be The Show’s Last
By Kadin Burnett and Gabrielle Bondi
Lizzo Proved She’s Team Jeremiah During Her ‘The Summer I Turned Pretty’ Review
By Grace Wehniainen
Get Even More From Bustle — Sign Up For The Newsletter