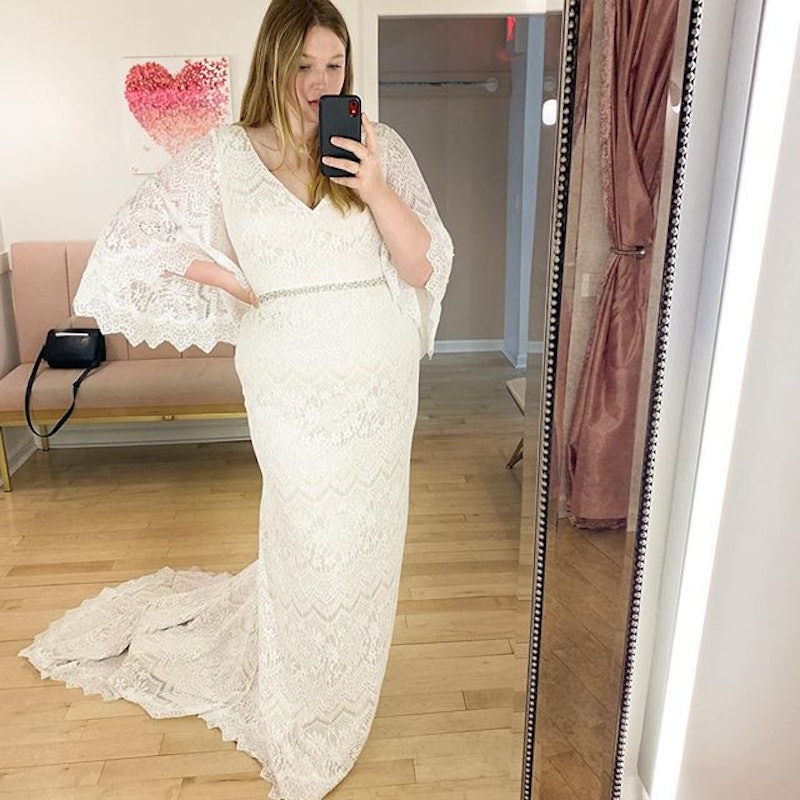 When I got engaged a little over a year ago, I did all the things people normally do when their partner proposes. I told friends and family. I announced it on social media. I started browsing Pinterest for dresses and decorations. And though I'm no stranger to how the internet works, I was still shocked when I saw my first wedding diet-focused ad pop up on my Pinterest a mere three days after I got engaged. I had a ring on my left hand for less than a week, and already I was being sold diets, cleanses, and "its not a diet, it's a lifestyle" programs which are, by the way, actually just diets, too.

I soon brushed off this first ad, though. After all, I had recently committed to giving up dieting after realizing that years of restriction and telling myself what I couldn't or shouldn't eat (first it was carbs, then dairy, then carbs again, then carbs and dairy) had dangerously warped my eating habits and self-image. I wanted to heal my relationship with my body and with food, and that meant no more 30-day eating plans and sugar detoxes and beach body bullsh*t. But then the next ad popped up. And the next. And the next. Suddenly, I was more confused than ever.

Here's the secret about getting married: It's an industry, a money-maker that — sure — is built on love and tradition, but also on the notion that if you don't look the "best you have ever looked" on your wedding day, then you have failed. And all of that is perpetuated by the idea that you only have one shot to get this right — not in the sense of choosing the right partner (a minor detail, right?), but more when it comes to your hair, makeup, and, maybe more than anything else, body.

Diet programs, shakes, food delivery services know this, too, and they use it. It's exactly why a Cornell study from 2008 found that more than 70% of brides-to-be were dieting leading up to their weddings. It's no wonder that after a few months of ads I was considering going back on one of the diets I had sworn off in preparation for my wedding. And then I saw an article about Sport's Illustrated Swimsuit Edition super model Hunter McGrady's wedding in Glamour where she discussed the unbelievable amount of pressure brides feel to lose weight before their big day and I snapped right back to common sense.

I spoke to McGrady about her experience with wedding diet-focused ads and it turned out even super models aren't immune to people telling them exactly what they should do with their bodies before a wedding.

"[After I got engaged] I had like an influx of tea detoxes in my Instagram and trainers and a bunch of people basically being like, 'OK, well now it's the time to like lose weight and ... shed for the wedding," McGrady tells Bustle. "And I was like, 'Wait a second, this is now becoming something that I never wanted it to be ... It seemed very stressful to me and I kind of lost track of the whole reason that I was getting married. And I took a step back and I was like, wait a second. My fiancé asked me to marry him as I am right now, in my body that I live in currently. And he loves me for that."

Hunter's story reminded me of just how easy the wedding industry makes it to slowly shift your wedding from being about marriage itself to being about looking a certain way on your wedding day. No one is saying you shouldn't prioritize your health or strive to feel beautiful, but the narrative of having to deny yourself bread at dinner for a year in order to enjoy your wedding day? It's bullsh*t, and it's tired. But if you've ever found yourself around a group of engaged people, this is almost always what the conversation turns to: "Tomorrow I'll get back on the wedding diet," or "I'm not eating pasta until the honeymoon," or "I swore off sweets for the next six weeks." And in addition to being boring as hell, it can be triggering for someone who is trying not to diet — not to mention for someone who may have a history of disordered eating of any kind. So how do you ignore it? McGrady suggests flipping the narrative.

"For me, I've kind of just learned to tune it out and say, 'You know what? Listen. How about instead of talking about the food that we're eating for an hour and a half, which is so boring ... actually, tell me about how you guys met ... aren't you excited to marry this person?'" McGrady says.

Even if you're not talking about it, though, odds are that if you're a bride, dieting has been on your mind — whether it was by choice or because ads and social media have made it impossible to ignore. #SweatingForTheWedding is everywhere. Before-and-after photos celebrating weight loss in wedding planning Facebook groups are common. But the benefits to ignoring all of that and not diet? They're endless.

Whitney Catalano, RDN is an anti-diet registered dietitian whose goal is to help people break free from the diet/binge cycle and heal their relationship with food. When Bustle spoke to Catalano about wedding diet culture, she agrees that while there's not a "a single industry that is immune to weight stigma and diet culture these days," the wedding industry is arguably worse. She also says that the benefits to intentionally not dieting before your wedding are virtually endless.

Catalano says that dieting not only predicts long-term weight gain in reality, it also puts you at greater risk to eat emotionally or binge eat. And all of these effects don't even scratch the surface of the very strong possibility that dieting will make you exhausted and stressed as you lead up to your wedding day.

"For example, in a time when you need as much mental clarity and emotional regulation to deal with the inevitable roadblocks of planning a wedding, your diet will likely cause you to be irritable, lethargic, distracted, fixated on food, and snappy with your family and friends," Catalano says. "Instead of celebrating in the few days leading up to the big day, you’ll be obsessively checking your body in the mirror, stressing about whether or not you look good in your dress, carefully avoiding any foods that might 'ruin' your day, and worrying about 'bad' pictures. The number on the scale has the potential to completely ruin an otherwise happy day, and the rigidity of your pre-wedding diet will likely cause you to binge as soon as the wedding is over, which can ruin how you feel about your honeymoon."

Catalano suggests prioritizing finding a dress that fits your current body and "developing a consistent routine to support your mental, emotional, and physical health" during your engagement. And as Catalano also points out, sometimes this means telling your friends and family that body and weight talk around you is unacceptable going forward.

"If the people in your life can’t support you in this decision, you need to find a way to protect yourself," Catalano says. "I’d also recommend writing a letter to yourself explaining why you don’t want to diet and why you deserve to feel happy and beautiful in the body you have now. This letter can support you whenever you are feeling stressed and insecure."

For me, surrounding myself with advice and perspective from people such as McGrady and Catalano has been a large part of the reason I've stayed focused when it comes to not going on a wedding diet. I spent many, many years of my life planning diets and cleanses around major events — vacations, graduations, other people's weddings, you name it. But, as Catalano pointed out, diets do not work. Period. They set you up to fail in more ways than one. And every time I'd get to said big event and feel like I had failed again because I had eaten bread more than one day a week or I had drank beer when I promised myself I'd only consume vodka sodas for a month, I felt like I failed then, too. I'd feel like I had missed out on some smaller version of myself that would have enjoyed the event more, would have wanted to be in more photos, would have been better. I spent so long chasing being smaller that I missed out on being happier every single time.

So when it came to my wedding, I looked at it as a challenge, and a year into my engagement, I still do. If I can get to my wedding day, the big event of all big events, and not have my happiness controlled by a number on the scale or what I did or didn't eat in the months leading up to it, then I think I can do it for the rest of my life. And in addition to, you know, actually getting married (a fun perk of a wedding day) — happiness that has nothing to do with how much I weigh, instead of everything? That's really what I want.

Lang, S. S. (2008, January 23). The bride wore white and, maybe, less weight -- but study shows she may have gone to extremes for that svelte look. Retrieved from http://news.cornell.edu/stories/2008/01/wedding-day-weight-wishes-lose-more-20-pounds.

More like this
10 Plus-Size Vintage Clothing Brands To Shop Online & In Store
By Dominique Norman
The Millennial “Queen Of Manifesting” On Turning Jealousy Into Inspiration
By Faith Xue
Ashley Benson Revealed The Whole-Body Effects Of Her Anxiety On TikTok
By Stephanie Topacio Long
Dyson Is Dropping Futuristic, Air-Purifying Headphones
By Rachel Lapidos
Get Even More From Bustle — Sign Up For The Newsletter