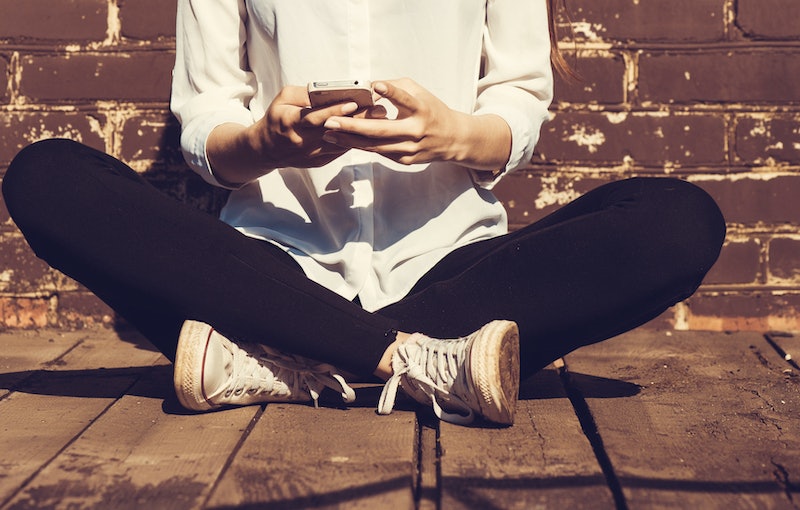 Just last week, I stared down with dread at my phone, my finger hovering above a white message that looked all too familiar: "Delete Tinder?" Those two words seemed to taunt me. Over the past few months, I had been going through a cycle of completely purging my phone of any trace of my dating apps, only to re-download them a day or two later. Dr. Emily Morse, a sex and relationships expert and the host of Sex With Emily, tells Bustle that this is a common phenomenon known as a "rel-APPS".

My relationship with dating apps had become characterized by frustration, loneliness, and insecurity, which was being manifested by this vicious rel-APPS cycle. There was an inner voice screaming at me to download all of my dating apps fed off of the attention I was getting from the men and women I spoke to.

I moved to a new city in January with two suitcases and a few friends, and the strangers who were defined to me only by a handful of photos, a name, and a brief description, helped alleviate my deep sense of loneliness. They fulfilled a need for social interaction and provided me with a means of meeting new people in a new and scary place.

My real-life dating prospects were abysmal, and my dating apps spurred a hope in me that I could find someone who I genuinely clicked with and could share experiences with.

My real-life dating prospects were abysmal, and my dating apps spurred a hope in me that I could find someone who I genuinely clicked with and could share experiences with. My days of searching for a quick, one-night hookup followed by an awkward goodbye and an Uber ride home were over. During these past few months, I've hoped that my dating apps would help me find a circle of friends and a partner.

But instead, I feel emotionally exhausted from swiping right and left on hundreds of people. I feel disrespected by the vulgar pick-up lines that several of my matches have sent me. I am utterly sick of engaging in conversations with people, only for them to disappear after a few messages. I am done with being booty-called at 3 a.m. by Tinder matches.

I have been relying on dating apps to fulfill my emotional needs, and instead, my emotional energy has been completely zapped.

Of the rare times that I do actually meet people in real life, I feel weary of the small talk and awkwardness of first dates. The incredibly petty games that follow — waiting for calls, not responding too quickly, and most distressingly, the ghosting — have all pushed me to my absolute limit. I am officially burned out from dating. And I know I'm not alone. According to Match's 2017 Singles In America survey of over 5,000 U.S. singles, 54 percent of single women feel burned out from dating.

By giving me a large plethora of dating options at my fingertips, dating apps have been the most significant source of my burnout. I have been relying on dating apps to fulfill my emotional needs, and instead, my emotional energy has been completely zapped. "Online dating fatigue occurs as early as three consecutive months," Clarissa Silva, behavioral scientist and author of the relationship blog, You’re Just A Dumbass, who surveyed 500 dating app users from 25 to 40, tells Bustle. "After nine months, 65 percent reported it feeling like a full-time job or habitual. It’s time to put the app away, if you start feeling like you’re putting in work hours into an app and still feeling frustrated with not finding your partner."

After pursuing one failed potential partner after another through dating apps, I have realized why I'm so burnt out: the people I am swiping right and left on don't match what I'm looking for. Most of them are looking for a casual fling, while I am looking for something more serious.

So this month, I'm participating in Bustle's App-less April and committing myself to deleting my dating apps, clearing my mental space, and moving forwards. I hope to use this time to reflect on myself and my emotional needs. Instead of wasting my energy on swiping, I will instead invest my energy into only positive endeavors.

I've pressed the X on the white message and I'm not looking back.

More like this
Hinge's New NFAQ Feature Is Demystifying Queer Dating
By Emma Carey
The Best Time To Date After A Breakup, According To Experts
By Bustle Editors
Is It A Rebound Relationship Or The Real Thing?
By Carolyn Steber and Lexi Inks
Are Virgo & Capricorn Compatible In A Relationship?
By Kristine Fellizar
Get Even More From Bustle — Sign Up For The Newsletter