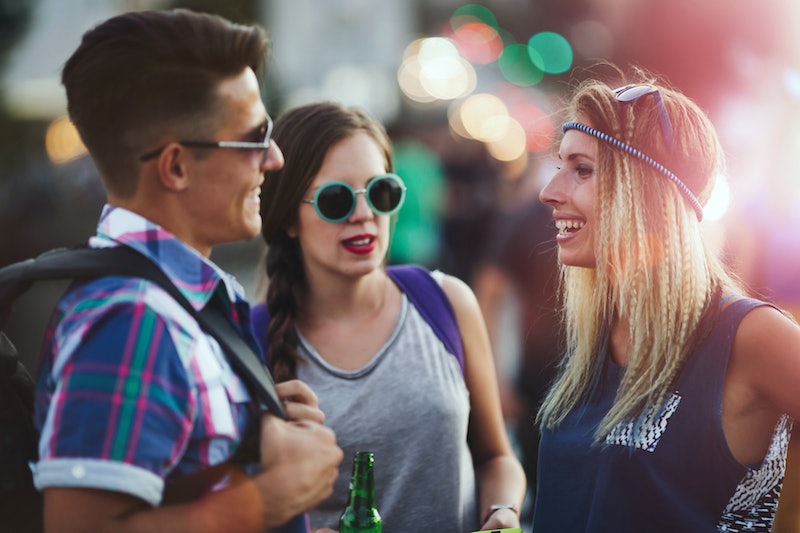 Whether dating apps are causing a "dating apocalypse" or are merely the easiest way to get a date, there's no denying these tools have been total gamechangers in the dating scene within the last few years. And even though dating apps are most popular among Millennials, according to a recent SeatGeek survey of 1,000 singles, 95 percent would rather meet people IRL versus online or on an app. That's why for the second year in a row, Bustle is deeming April, "App-less April" and encouraging our staff and readers to delete their dating apps for 30 days and meet people the old-fashioned way: offline. With participants tracking their progress and tricks and tips from dating experts, we'll be helping you feel empowered to meet people IRL all month long. Today's topic: where to meet people, besides the bar.

Now that App-less April, Bustle's challenge to delete your dating apps for a month, is here, you may be wondering where to meet people IRL. While bars and parties are great ways to meet people, believe it or not, there are many other places to potentially meet your match if you're not feeling those. SeatGeek — the company where you can find tickets to live events — teamed up with relationship expert Paul Brunson and asked 1,000 single SeatGeek users about dating, relationships, and live events. A big thing they discovered was that most people, 95 percent, would rather meet someone in person at an event than online or via an app. So, this makes the timing of App-less April even more perfect! A couple reasons were, "you get to see if there's immediate chemistry" and it "feels more natural and authentic."

"Most surprising was how overwhelmingly people preferred initially meeting someone in person versus online — I knew it would be a big majority, but I didn't foresee 95 percent desiring it," Brunson tells Bustle regarding the survey results. "Also, I LOVE that you're leading the charge for an App-less April. I actually challenge people to go bigger and go a full year without a dating app. Why? Because 30 days just isn't enough to change your mindset and see results."

Speaking of phones, in SeatGeek's findings, they were ~not~ a turn-on. Almost half of the respondents, 45 percent, were not into people excessively using their phones. Taking selfies was a big turn-off, too, with 40 percent of those surveyed not into people doing so. Instead, 64 percent of people preferred making eye contact and smiling. Interesting, right? And refreshing!

Without further ado, here are popular places to meet people IRL, according to SeatGeek's findings.

The SeatGeek Singles Survey found that 65 percent of single women and 64 percent of men would prefer to meet potential partners at concerts. "As far as where and how to meet people, the survey says it perfectly: 'Live events like concerts,' Brunson says. "What's great about concerts is that they do a great job dividing us up into our values and interests (which is primarily how we select people to be in our lives)."

Yep, comedy clubs were up there, too, as venues to go to to meet fellow singles — 43 percent of women and 46 percent of men surveyed said so. And, honestly, do you blame them? Plus, it’s an activity, and you probably know activities make for great dates and places to meet someone. After all, you automatically have a shared interest and an easy conversation-starter is talking about the comedians. Then, you can naturally segue to other conversation topics — and potentially leave the club with a date lined up for the weekend.

The survey found that 41 percent of respondents (a tie between women and men) prefer to meet someone at a baseball game versus at a bar. With the weather getting warmer, who doesn’t like going to a day or night game and seeing their favorite team play?

Only four percent of men prefer to meet women at bars, the survey results found, while that number was slightly higher for women at 10 percent. Plus, personally, I think a non-alcohol-laden place is best. I know the above options have the potential for alcohol, but bars tend to spell out drinking. As someone who’s dated guys with drinking problems, I much prefer the more sobering places to meet potential dates. Plus, there are tons of date ideas out there that don’t require alcohol and are fun! "Regarding the 'best' live events, go to whichever ones align with your values, he says. "If that means volunteering at an inner city community center or going to a concert by your favorite band, go with your values!"

When it comes to actually meeting someone IRL at one of the above events, how should you go about it? "Honesty is the best policy," he says. "If you're approaching someone because they have the most amazing eyes, how they're dancing, or simply because they're at the same live event, be truthful and tell them. You may not always get a positive response in return, but if you do, you'll know you're starting your relationship on a truth (the most powerful building block of a relationship)."

I couldn't agree more with doing activities you enjoy, and the rest (i.e., possible romantic partners) will follow. He or she could be dancing next to you at Bruno Mars or sitting in front of you at a Cubs game. Point being, you never know unless you get out there — and off your dating apps!