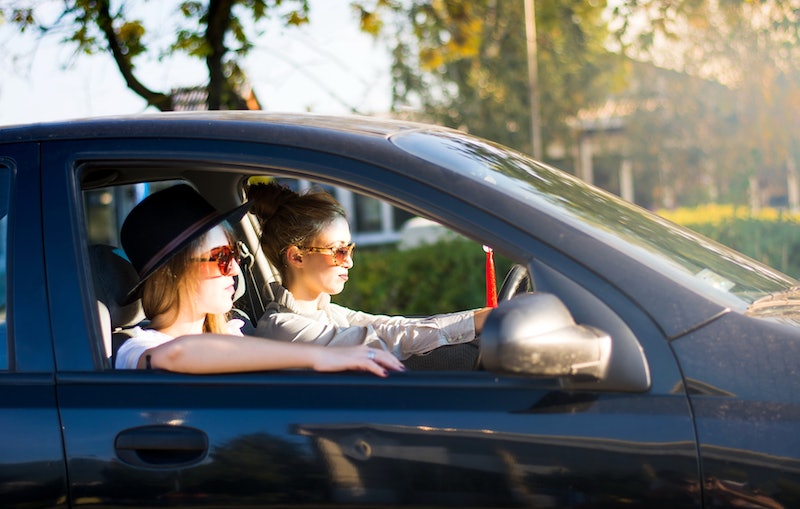 I've been driving since I was 16, but because I hail from Australia, a country with huge highways and giant commuting times (though not as many kangaroos on the road as you'd imagine), I learned to drive as most people do: on an automatic transmission. However, I'm about to move to Ireland with one husband, one elderly cat, and one car that has — you guessed it — manual transmission. It's about to get all Fast And Furious up in here. And while it's always good to get to grips with a new skill, being an adult woman learning stick shift on the roads has given me a new perspective on the sexism around driving manual.

Drivers of manual cars have to shift between the gears, which help control the car's speed, themselves. They do it using a clutch pedal, a gearstick, and the acceleration, the operation of which needs to be timed out exactly, or else the car's engine will stall out, aka stop suddenly. If it sounds complicated, it is, particularly because a better way to control cars was invented in the early 20th century. Automatic cars do all the gear changes, well, automatically, without a driver having to make so many changes and calculations. I think this is a far better system, as it involves pressing an acceleration pedal and a brake and little else. However, circumstances have forced my hand and put a gearstick in it. And it's been an interesting ride.

Learning how to drive still comes with some weirdly sexist overtones. Sharing the road with a driver with visible L-plates can, I know, be a frustrating experience. But I've never experienced so much road rage from other drivers, all male, as I have while attempting to drive stick. I live in the UK, where the vast majority of drivers have manual cars, so you'd think there would be a higher level of empathy with the occasional stall or slowness when changing gear — but instead, I have angry men riding on my bumper, leaning on their horn behind me at traffic lights, attempting to pass me dangerously, and generally acting pretty uncool.

I can't say for sure that these men wouldn't treat any other learning driver, of any gender, the same way, but I also wouldn't be surprised if this kind of reaction is more likely when it's a woman at the wheel. I have 10 years of experience on the road; I'm a safe and skilled driver who happens not to be natural at gear changes yet, so nothing I'm doing is unsafe, or even genuinely annoying. And yet I get a symphony of horns that sounds like the 1812 Overture if I happen to muck up a hill start.

Since starting to drive a stick, I've uncovered a bizarre undercurrent of weirdly gendered beliefs about manual transmissions. Put briefly, they're "for men." Men's magazines have long articles about why "real men drive stick," with reasons like "men like being in control," "you can't drift or pull fancy moves in an auto," and "you'll always look cool." And this is hardly a new attitude.

Professor Katherine J. Parkin explains in Women At The Wheel, a history of women driving, that from the time of the Ford Model T onwards, the car has been "a symbol of masculinity," and women have often been relegated to the passenger seat. She notes that while it's thought a woman first drove in 1899, and pioneers like Alice Ramsey, who drove cross-country across the U.S. in 1909, attracted attention and acclaim, driving has often been coded as a "male" thing in the cultural consciousness. Particularly stick-shift. And the Saudi Arabian legal battle to allow women behind the wheel of cars, which was finally won in 2018, has meant that the history of women and driving has been in the spotlight again.

Of course, men's magazines aren't an accurate picture of the male zeitgeist, just as the same is true for women. But the fact that these sorts of ideas are still around, and visible on the roads, indicates that driving stick as a woman is still considered a bit of a remarkable act. Which, naturally, just pushes me to excel at it. Catch me on a highway near you, in fifth gear with the top down. And if you beep, you know I'm going to ignore it.