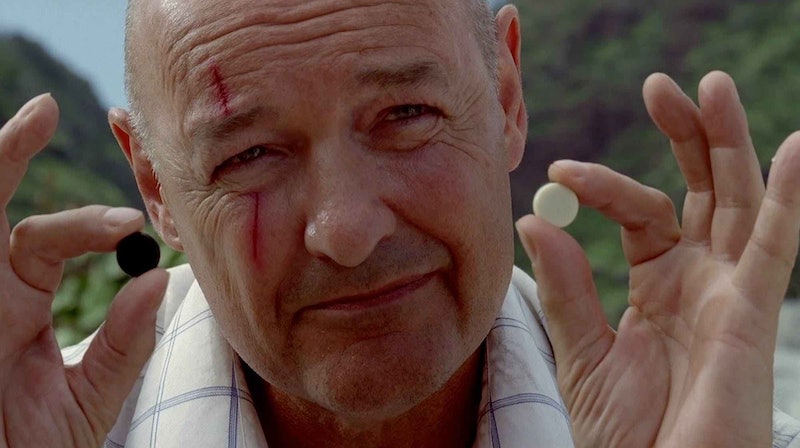 Bustle's I'm So Jealous series is dedicated to the books, TV shows, movies, podcasts, and more that super fans are so jealous someone else gets to experience for the first time. In this installment, Leah Marilla Thomas writes about the 2004-2010 television phenomenon Lost.

Television wasn't really my "thing" in 2004, but Lost made it my thing. I preferred movies and books back then. I wasn't used to following a show chronologically, over the course of six seasons. I checked out the Lost pilot as a Tolkien fan excited to see Dominic Monaghan in something new, and mildly curious about the Gilligan's Island/Lord of the Flies-type plot.

Little did I know I was embarking on the fandom journey of my life.

Unlike Harry Potter midnight releases, another definitive fandom experience I had growing up, I didn't ultimately retreat to my room to watch new episodes alone. Lost was all about community — crowding as many people as possible into a friend's dorm room every week. If someone missed an episode, we'd fill them in the next morning in the dining hall, spoilers and all. It's because of Lost that I started reading TV recaps, looking for clues, Easter Eggs, and literary allusions that I may have missed. Every single episode was an event and then a journey.

It's not just about an island with a lot of weird science fiction stuff. It's not just about a plane full of people who had all coincidentally run into each other in their lives before boarding a plane. Even when it's campy and/or full of supernatural jargon, Lost had a lot of things to say about spirituality, connection, and what it means to be a human being.

Lost is not a perfect show, but that's kind of what makes it so special. Some episodes, like "Through The Looking Glass," "A Tale Of Two Cities," "Greatest Hits" and my personal favorite Christmas tradition "The Constant," are truly incredible, mind-blowing hours of television. Some episodes — I won't call them out for courtesy's sake — are straight up terrible... and that's just fine.

Right after Lost, and debatably perhaps as a response to Lost's popularity, some critics suggested that audiences changed how they approached television shows. Prestige TV blossomed, as did comment boards on the internet, and all of those message boards and fan sites began demanding perfection from everything. But it wasn't always like that, and Lost is a good example of learning to just take an episode of television for what it is and to move on.

On that note, if one character isn't your favorite now, they may be down the road. Seriously, the way Sawyer can go from being the worst to the best and back again will give you whiplash. I miss it! New characters will pop up and steal your heart. So many of my favorites showed up in later seasons: like Juliet, Faraday, Karl, and Miles. Midway through the series, I threw a romantic 'ship I was willing to go to bat for out the window in favor of a new pairing. But overall, after six seasons, all of the characters feel like family to me.

Should I watch Lost again? Don't tell me what I can't do! I'll watch it with you. I promise to be chill about it and not expect too much from you as a new fan. You're in for so many iconic moments: the Taillies, learning to love the Others, Nicki and Paolo, that time Kate married Nathan Fillion, getting a little Arnst on you, Richard's (maybe) eyeliner, and Frank Lapidus, to name a few.

The best advice I can give if you're watching Lost for the first time: take it slow. This show was not really meant to be marathoned. Give yourself the time to unwrap each new mystery and get to know all of the characters. Lost knew that if you didn't care about the people on the Island, you're not going to care about numbers, hatches, or smoke monsters. And believe me, you will be subsumed by all of those things.

Release your need to have everything answered: Lost got a lot of flack for not answering every single fan question in the series finale. However, if you're watching for the first time and don't have that expectation, you're guaranteed to have a satisfying experience. I envy that.

If you don't know what to watch next: You're in luck! We OG fans had to watch writers and networks struggle to come up with "the next Lost" even before the show went off air — and there are finally some worthy disciples in The Good Place, The Leftovers, and Westworld. Manifest on NBC is also shaping up to be very Lost-ish, though it's too early to tell.

If you find yourself converted to the Dharma Initiative: Whatever happens, happens! Welcome to the club, dude, and namaste.