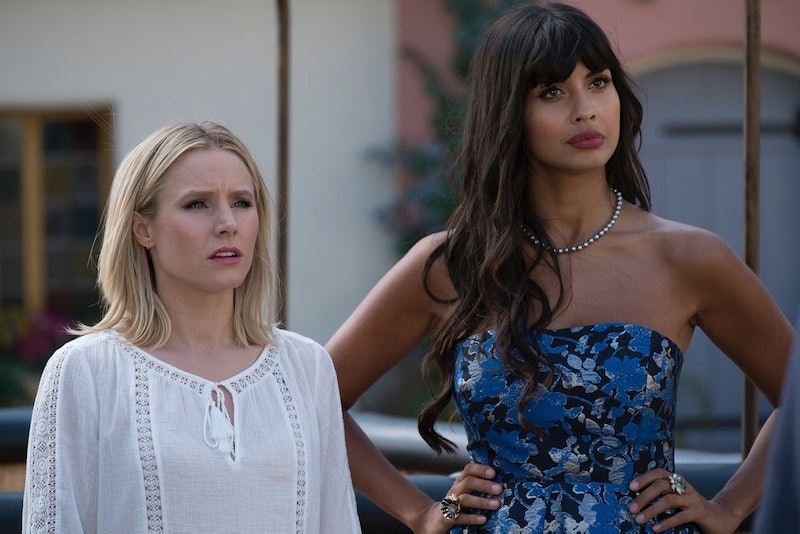 When Lost ended in 2010, new science fiction dramas scrambled to be named "the next Lost" and swoop up that avid — and still confuddled — fanbase. Who could have guessed that the rightful thematic successor to the brain-bending series was an NBC sitcom from Michael Schur, the guy behind Parks And Recreation? It's not just Easter Eggs, either. The Good Place Season 2 finale will remind you of Lost in its themes and what it has to say about both the afterlife and our lives on Earth as well. Spoilers for both shows ahead!

None of this is a coincidence, of course. When Schur had the idea for The Good Place, he consulted Damon Lindelof, the former Lost showrunner who is also responsible for The Leftovers — the adaptation about of Tom Perrotta's novel that took also took a deep dive into existentialism. "I needed a person who is conversant in the language of science fiction or genre writing," said Schur in an interview at Vulture Fest, "which I am not." He modeled The Good Place after Lost, according to Deadline. Honestly, Eleanor should have been echoing Charlie's "guys, where are we" from the very beginning.

As Lost fans may have already noticed, the Good Place most recent season finale draws heavily from the beloved Season 4 episode "The Constant," in which two people connect with each other through space and time in order to solve a problem. Instead of Desmond Hume and Daniel Faraday, it's Eleanor and Chidi. This was actually set up in the Season 1 finale with Eleanor's note to herself. In the Season 2 finale, Kristen Bell's character even flies to Australia, where Oceanic Flight 815 originated, to find her soulmate.

Vulture's Jen Chaney noted how The Good Place essentially "detonated a hydrogen bomb," referencing the "incident" in the Lost Season 5 finale. Keen fans should have seen this coming, honestly. Maya Rudolph's judge told us that she was named after Hydrogen. Both Gen and the "incident" spun off an alternate universe for their respective characters.

The Lost series finale is famously controversial. Fans still complain that it didn't answer enough questions, and that a show exploding with clues and attention to detail never paid off satisfactorily. However, the thematic elements of the finale and the season leading up to it often get forgotten in the criticism, and it's from there that The Good Place draws some of its best elements. So not only is The Good Place the "comedy Lost," but watching it might actually make you like the way Lost ended more. Closure works in mysterious ways.

In the final moments of Lost, the islanders are gathered in a church after discovering that after dying, they were dropped in a kind of timeless purgatory — a Medium Place, if you will — and tasked with finding one another before they could regain their memories and move on. Jack, always seeking answers and validation from his father, finally gets something of an explanation. Not about the island, but about the Sideways World.

"This is a place that you all made together so that you could find one another," says Christian Shepherd. "The most important part of your life was the time that you spent with these people. That's why all of you are here. Nobody does it alone, Jack. You needed all of them, and they needed you."

For all of the unanswered questions and rabbit holes that fans went down watching Lost for six seasons, this is a beautiful sentiment about life and human connection. It's that theme that pervades The Good Place, though of course the important time that these characters are spending with one another is happening in their death, not their life. At least, it was until the Season 2 finale.

Michael's initial experiment was inspired by Jean-Paul Sartre's No Exit, the existentialist play about three characters torturing each other in the afterlife which famously posits that "Hell is other people." However, what Michael has found (particularly while observing Eleanor in the Season 2 finale) is that human beings make each other better. Eleanor can't improve herself alone. She needs to find Chidi. The fact that the four people chosen to torture one another actually need one another to become good people is a beautiful sentiment in and of itself.

Chidi actually echoes Shepherd's monologue in the conclusion of the lecture that Eleanor watches on YouTube in the finale. “I argue that we choose to be good because of our bonds with other people and our innate desire to treat them with dignity," he says. "Simply put, we are not in this alone.”

As Chaney also noted, both shows are about whether or not a person has the capacity to change in their own way. Lost was struggling with science versus faith, or destiny versus free will. The Good Place is about whether people are fundamentally good or bad. But the emphasis on relationships in both shows ties them together as well. Eleanor needs Chidi, Tahani, and Jason, and they need her.

It'll be interesting to see how these parallels and thematic rhymes continue as The Good Place goes on to Season 3. With hindsight and a lack of anticipatory fans, Schur may even be articulating those ideas that Lost was tossing around better. Either way, it's nice to see that legacy grow on television... with Janet this time, instead of the Smoke Monster.