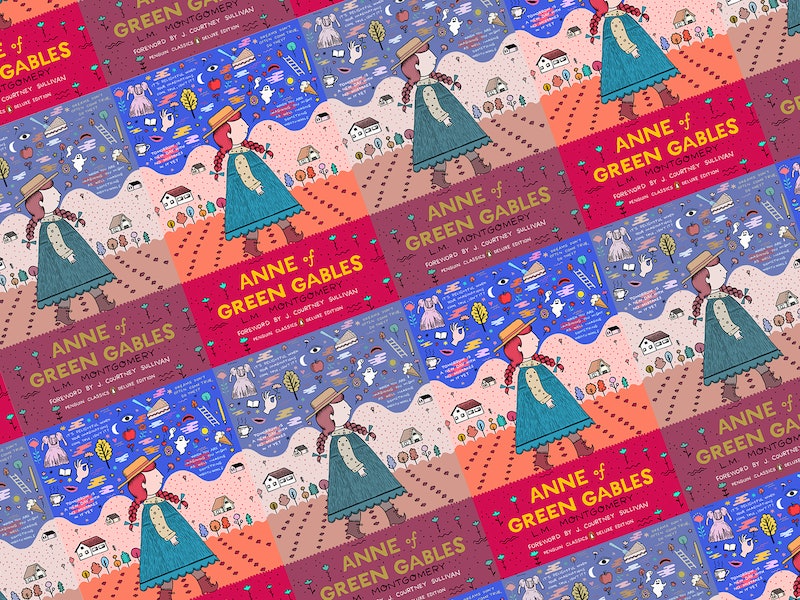 Bustle's I'm So Jealous series is dedicated to the books, TV shows, movies, podcasts, and more that super fans are so jealous someone else gets to experience for the first time. In this installment, Kristian Wilson writes about L.M. Montgomery's classic children's novel, Anne of Green Gables.

Between the threat of Y2K, the haunting release of The Matrix, and everything else in-between, 1999 was the weirdest, most effed-up year of my life. After I spent several months being verbally abused by my teacher, my parents pulled me out of public school and sent me to a tiny private academy. I was suddenly an outsider, much moreso than my chubby, autistic, nine-year-old self had ever been before. Everyone at my new school had known each other forever, and now here I was, trying to integrate my tomboyish, loud, heathen self into a rock-music-less world of plaid skirts, polo shirts, and strict gender roles. That was the year I found out that Santa wasn't real, the year I found out that some people think yin-yang and peace symbols are Satanic, the year I found out that I was an Anne girl.

My new third-grade teacher was nothing like the one I had left behind in public school. She was a tiny, kind woman who read recent Christian children's literature — Ed Dunlop's Escape to Liechtenstein and The Vanishings by Tim LaHaye and Jerry B. Jenkins — aloud to the class. When another girl bullied me at the lunch table, she stuck up for me. And one day she said 15 words that would change my life:

"I've been reading Anne of Green Gables, and she reminds me so much of you."

Lucy Maud Montgomery's 1908 novel centers on the eponymous Anne Shirley, an 11-year-old orphan who comes to live on Prince Edward Island in the 1890s. Anne is a hopeless romantic, obsessed with poetry and fantasy, and she insists that everyone spell her name with an E — that is, if they won't call her Cordelia. She comes to the little village of Avonlea when the middle-aged Cuthbert siblings, Matthew and Marilla, send for an orphan to help them manage their property. The problem is, the Cuthberts wanted to adopt a boy to help Matthew with the farmwork, and Anne finds herself unwanted, yet again, when the novel opens.

Anne of Green Gables stuck with me, largely, because of the fish-out-of-water situation I found myself in when I came to the novel. My whole world had changed that year. My mom was working for the first time I could remember, making extra money to pay for my private school tuition. I was surrounded by people so very different from myself, and I found it nearly impossible to blend in. My own unrepentantly me self made few friends, with her strange ways of speaking, her lack of eye contact, and her brash nature.

Standing out meant that I, like Anne, was mistrusted and mistreated by many of the adults around me. I didn't smoke or drink until I got to college, but so many of my friends' parents thought that I was a bad influence on their children, what with my black-painted fingernails, emo music, Yu-Gi-Oh! cards, and sketchbooks of manga-style artwork. Whenever I think of the scene in which Anne accidentally gets her bosom friend Diana drunk, I inevitably think of the time I called another girl's house, only to be told by her father, once he learned who was calling, that "We do not allow [her] to talk to the phone." I remember that the same adults who never missed an opportunity to reprimand me for doing something wrong almost always looked the other way when I was the one being hurt.

It wasn't just Anne's living and social situations that endeared her to me, however. Her romantic flights of fancy were very much like my own. I loved playing make-believe in Narnia, or in one of my invented fantasy worlds, and I always hoped I'd stumble upon my own version of the Cottingley Fairies, just around the next tree or bush. Anne's near-drowning while trying to recreate "The Lady of Shalott" is exactly the kind of stunt I would have pulled, given a boat, a Laura Ashley dress, and a calm river. Had I grown up in a less protective home, I would have been happy to walk through the woods reading poetry, as Megan Follows's Anne does in the Anne of Green Gables miniseries.

Anne's outrage over broken rules has always been particularly on-brand for me, as has her sense of righteous indignation. People were never supposed to directly disobey a rule, in my book, but they could absolutely test the waters of ambiguity, as Anne does when she relates to Marilla how she'd like to "feel a prayer," rather than saying one outright. And the famous scene in which Anne breaks her slate over Gilbert Blythe's head for sexually harassing her? Well, let's just say that a friend, who never knew me as a child, recently told me he imagined that my younger self would have punched a boy in the face for trying to kiss her — and he wasn't entirely wrong.

Anne was with me when I decided to study literature.

She was there when I dyed my hair black — and was afraid of it turning green.

She was by my side when I learned to swallow my pride, and she's there whenever I need to put someone back in their place.

My teacher was right — I was Anne. Twenty years later, I still am.

If you’re picking up Anne of Green Gables for the first time: Be aware that the novel has some moments of anti-immigrant racism, and that it doesn't always buck gender roles as you might expect.

If you love it and want more of the same: You should read the rest of the books in the series, and also check out a few other plucky girl novels, such as Mandy by Julie Andrews Edwards, One Crazy Summer by Rita Williams-Garcia, and The Birchbark House by Louise Erdrich.

And if this book turns you into an L.M. Montgomery fansquealer: You should know that she has two shorter series of books, which begin with Emily of New Moon and The Story Girl.