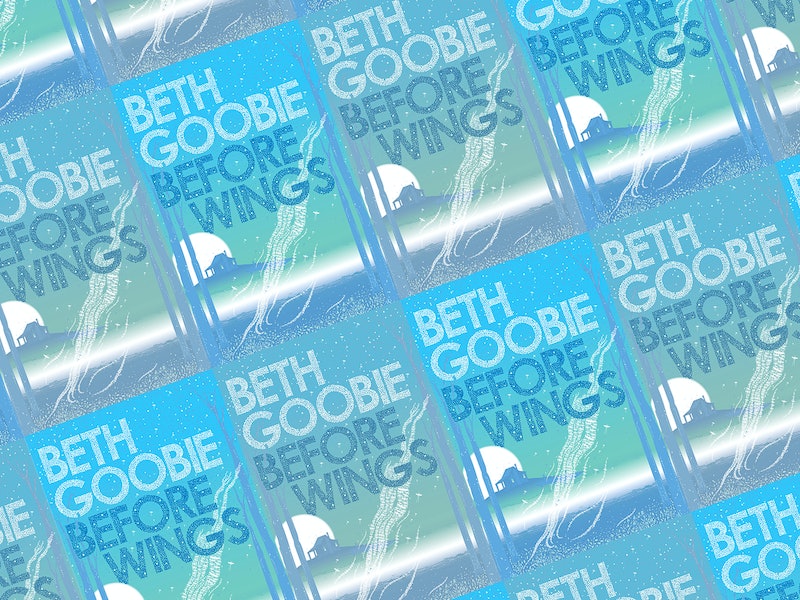 Bustle's I'm So Jealous series is dedicated to the books, TV shows, movies, podcasts, and more that super fans are so jealous someone else gets to experience for the first time. In this installment, K.W. Colyard writes about Beth Goobie's Before Wings.

I was 12 years old the first time I ever stayed up all night to read a book. I'd picked up Beth Goobie's Before Wings to help me complete my local library's summer reading program checklist, drawn to the novel by its compact size and early-Aughts cover design. Inside, I found a compelling story of young love and premature death that I just couldn't put down.

As a kid, I was a big fan of depressing stories — that hasn't changed — and I had a particular fondness for Lurlene McDaniel's sad, somewhat religious YA novels about dying teens. So when I saw Beth Goobie's story of a girl reckoning with her own mortality in the wake of an aneurysm, I knew I had to read it. What I didn't know was that 15-year-old Adrien wasn't the only character facing death in Before Wings.

Two years after she nearly died from the brain aneurysm she knows will eventually kill her, Adrien goes to work for her Aunt Erin at Camp Lakeshore, where she sells snacks and merchandise to campers at the canteen. There, she meets Paul, a brooding teen who works as a handyman at Camp Lakeshore, and who knows exactly when he's going to die. Paul has had a recurring dream depicting his death, and he knows it's coming for him on his next birthday, right in the middle of camp season. Adrien features in these dreams, and both teens hope she's there to save Paul from meeting a grisly fate.

'Before Wings' by Beth Goobie
Amazon

Paul is not the only other person whose death Adrien must face, however. Twenty years before Adrien's summer at Camp Lakeshore, her Aunt Erin served as counselor to a cabin of five teens, all of whom died in a tragic accident on the stormy lake. Now, Adrien catches glimpses of the girls' ghosts reliving their final days, unaware that they are hurtling toward death.

Those three storylines — Adrien's aneurysm, Paul's dream, and the ghostly campers — converge at the climax of Before Wings. As the narrative moves closer to that convergence, however, reading the story begins to feel like being caught in a landslide. Well aware that the book's final moments were coming, I couldn't put Before Wings down without knowing whether and how Camp Lakeshore would claim more lives.

If you are picking up Before Wings for the first time: Carve out the time to finish it in one sitting. At just over 200 pages, Before Wings is easy to devour whole, and trust me, you'll want to.

If you love it and want more of the same: You'll want to explore the dark YA of the late Nineties and early Aughts. Check out Francesca Lia Block's Echo, Annette Curtis Klause's Blood and Chocolate, and Armageddon Summer by Jane Yolen and Bruce Coville.

If Before Wings leaves you wanting more of Beth Goobie: You've got plenty to choose from, but let's narrow your selection to a few good reads. Check out Goobie's first novel, Group Homes from Outer Space; her latest work, The Pain Eater; or another of her most popular books, The Lottery.