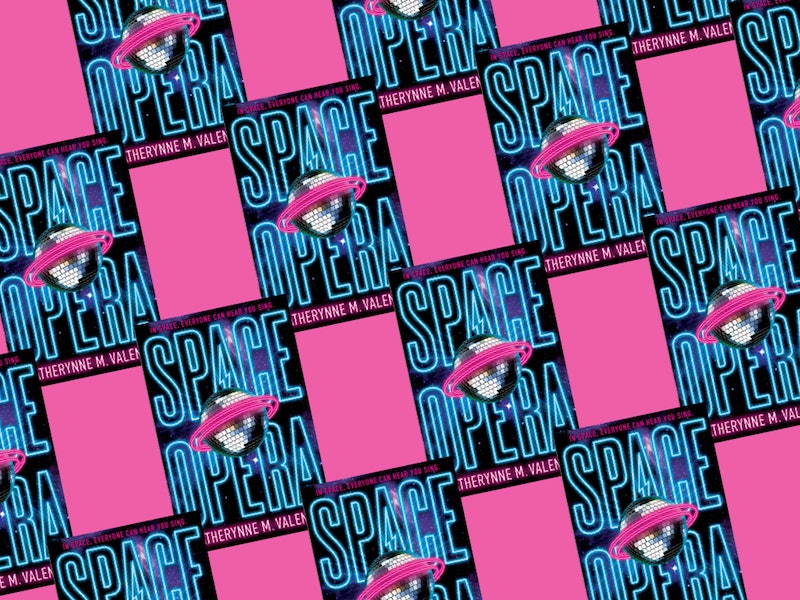 Bustle's I'm So Jealous series is dedicated to the books, TV shows, movies, podcasts, and more that super fans are so jealous someone else gets to experience for the first time. In this installment, K.W. Colyard writes about Catherynne M. Valente's Space Opera.

As a reader, gamer, and all-around media consumer, I'm a sucker for literally anything "... in space!" Bounty hunters... in space! A summer road trip... in space! Lesbian necromancers... in space! So when I see a book repeatedly likened to Eurovision... in space!, I expect to enjoy it. And boy, oh boy, did Catherynne M. Valente's Space Opera exceed my expectations.

Since 1956, a whole host of countries — primarily those in Europe, but also including Australia and select Asian and African nations — have competed in Eurovision: an annual, televised, musical event that pits representative musical acts from each nation against one another. Such acts are extravagant, to put it mildly, and often absurd, in a delightful way. Prominent Eurovision acts include Céline Dion, who won for Switzerland in 1988; Olivia Newton-John, who competed for the UK in 1974; and ABBA, who won for Sweden in 1974.

In Space Opera, the contest in question isn't Eurovision, but the Metagalactic Grand Prix — a competition between sentient species from across the universe. As the species most recently identified as being potentially sentient, Earth's humans have been invited to compete in the upcoming contest.

Well, invited is putting it mildly. You see, if humans don't compete, or if their competitor places dead last in the contest, the coalition of sentient races that run the Metagalactic Grand Prix will annihilate them, allowing another species — probably house cats — a chance at achieving sentience. Fun, right?

Not to worry, though, because the species most recently declared sentient — the Esca, a race of giant, blue flamingo people — have come along to help ease humans into their first competition. They've identified a list of the human musicians most likely to avoid losing the Metagalactic Grand Prix... but they're all dead. All of them, that is, except for one.

Decibel Jones, "the ultimate glamgrind messiah of the late 2010s," is a washed-up diva whose life fell apart after his three-piece band, Decibel Jones and the Absolute Zeroes, suffered the loss of one of its key members. Earth's reigning governments balk at the idea of sending Dess into the fray, as do Dess and his other surviving bandmate, rocker-turned-family man Oort St. Ultraviolet. But the Esca insist that Decibel Jones and the Absolute Zeroes are humanity's only chance to avoid eradication, so it's off to a sex-fueled spaceship for Dess and Oort, and possibly bye-bye forever to Earth's dominant species.

Space Opera is Eurovision meets British speculative comedy. Valente's humor here recalls Douglas Adams' Hitchhiker's Guide to the Galaxy Trilogy and Terry Pratchett's Discworld series. It's an easy novel to love, speaking as a kid who grew up with British comedy, from reading those books to watching Monty Python's Flying Circus. Even if you're not familiar with Adams' and Pratchett's writing styles, however, you'll still love this novel. Just take a page from Decibel Jones' book: Sit back, relax, and embrace the weird.

If you are picking up Space Opera for the first time: Prepare for some strangeness. Valente alternates between Dess and Oort's present circumstances and tales from past Metagalactic Grands Prix, which introduce new sentient races into the mix. It's a heady and hilarious whirlwind of color and style, even in black and white.

If you love it and want more of the same: In addition to the aforementioned Hitchhiker's Guide to the Galaxy by Douglas Adams and The Color of Magic by Terry Pratchett, pick up The Long Way to a Small, Angry Planet by Becky Chambers or Redshirts by John Scalzi, which tell sci-fi stories packed full of humor.

If Space Opera leaves you wanting more Catherynne M. Valente: You're in luck, because Valente is a prolific author of science fiction and fantasy. Radiance is another space-faring adventure, set in a decopunk timeline and featuring an adventurous young woman traveling to Venus for her next film. For something a little different, check out Deathless, Valente's retelling of the Russian folktale, "Koschei the Deathless." Finally, there's Space Oddity, the planned sequel to Space Opera, which is currently slated for release in 2021.