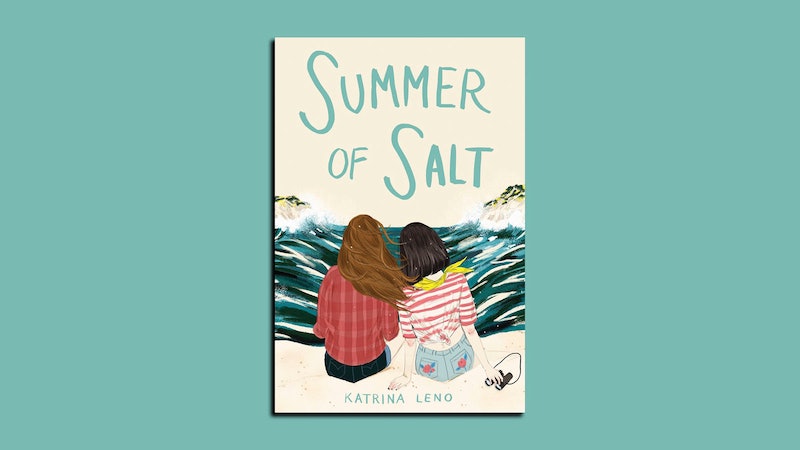 Bustle's I'm So Jealous series is dedicated to the books, TV shows, movies, podcasts, and more that super fans are so jealous someone else gets to experience for the first time. In this installment, Kerri Jarema writes about Katrina Leno's Summer of Salt.

“On the island of By-the-Sea," Katrina Leno writes, "you could always smell two things: salt and magic.”

In Summer of Salt, readers follow twin sisters Georgina and Mary during their eighteenth summer on their small island home of By-the-Sea. The girls are Fernwehs, descendants of a long line of witches, though that word is never used. Mary — who is bold and brash, with "moods like tides "and a "temper like a hungry shark” — has been able to float since she was born. But Georgina has yet to come into her powers, and she is convinced she never will. What follows is a summer of self-discovery, unspeakable tragedy and a magical mystery that links the Ferweh women across generations.

"In a family full of girls," Leno writes, "you realize quickly that no girls are ordinary."

But many of the struggles Georgina and Mary face as sisters, and as women, are ordinary: They worry what other people think of them, they constantly compare themselves to each other (Mary is popular, free-spirited, literally magical; Georgina is quiet, straight-laced, trying to find herself outside her family's history), and they grapple with the idea that the bonds between them may be at risk of fraying.

I often wonder what my life would be like without my sister.

Well, that's not exactly true. I often wonder what I would be like without my sister. Like Georgina and Mary, we have always lived, in many ways, at opposites. Perhaps all sisters do. We are two members of a family full of complicated women. One is the rebellious Scorpio with fiery moods and fiery passions; the other is a steadfast Capricorn with grounded ambition and untethered wants.

Would my sister be so good at math if it wasn't my Achilles heel? Would I have a collection of spontaneous tattoos if my sister hadn't beat me to it? Would Georgina have her powers if Mary hadn't discovered hers first? Would Mary be so connected to the tides if Georgina didn't tire of salt on her skin? Who can say.

But perhaps that is, after all, the point of sisters. For many of us it is our sisters who know who we truly are, more than anyone else in our lives. They see us in moments both dark and light. They alone are privy to those thoughts that only spring forward late at night, in a shared childhood bedroom before everything changes forever.

Like Georgina and Mary, I know there is no point trying to figure out who I would be without my sister. Who we are is a direct consequence of that weird and almost unknowable bond. But I do know what my life would be like: Less complicated perhaps, but also far less magical.

If you're picking up Summer of Salt for the first time: Don't be fooled by that beachy cover. Although the book is set during the summer, it is perfectly suited for Autumn. This is the ideal companion on a rainy fall day, trust me.

If you love it and want more of the same: For another story that follows generations of complex women, life on a small island, and contains a strong dose of magic, you'll want to pick up Nina Moreno's Don't Date Rosa Santos.

And if this book converts you into a member of the Katrina: Katrina Leno's books tend combine the magical and mundane, and are filled with young women who are coming into their own. Her third novel, Everything All at Once, follows Lottie Reeves after her beloved aunt's death, and it's perfect for fans of Summer of Salt.