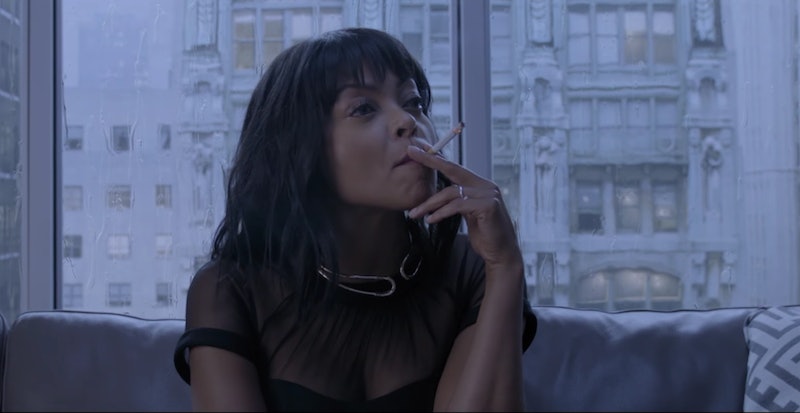 Is it too early to declare 2018 the year of Taraji P. Henson? Actually, at the rate the Empire and Hidden Figures star is going, we might as well give her the whole decade. Fresh off the heels of the woefully underserved Proud Mary, Henson is adding to the list of her tour de force performances with Acrimony from director Tyler Perry. Bustle has the exclusive first look at the new Acrimony poster — and you're going to want to sit down for this.

In the new movie, out March 30, Henson plays Melinda, a woman devoted to her husband, Robert, only to find he's been living a double life, cheating on her relentlessly. Tired, betrayed, and angry, Melinda decides she isn't willing to forgive and forget: she wants to get even. Think Fatal Attraction, but this time, the woman is controlling the narrative. In the poster, as with the trailer, Henson sits alone, front and center, as if on a throne of her own making. She looks directly into the camera, as if daring you to challenge her. The writing on the poster declares "Hell Hath No Fury," but Henson is so much more than a woman scorned. Unless the thing that scorned her was Hollywood. In that case, she's coming for you.

Henson has said in interviews that she has had enough of Hollywood selling black actors, specifically black women, short. And Acrimony is just the latest in a series of films she's putting out with the hope of changing how the industry views black female leads. "They give us a lower budget, and we take that budget and make magic and break all kinds of records — we're making a dollar out of 15 cents with these projects," Henson said in an interview with The Hollywood Reporter, pointing to Girls Trip as a prime example. "It's stupid that I'm not getting paid what I should be getting paid because of the color of my skin, but I'm turning in the performances, hand over fist." Her plan: to keep asking for what she's worth. "What I do is I keep fighting, I keep fighting for my money until I don't have to fight anymore."

Henson is driven by a desire to tell important stories, but more than that she wants to inspire a new generation of actors. "I love black people. I love telling stories," Henson told Marie Claire. "I want these little girls to study me like I studied Meryl [Streep] and Bette Davis and Carol Burnett. I want them to study my work, because I put a lot of work in, a lot of blood, sweat, and tears." In the same interview, Henson said she made a point to take on as many different characters as she could throughout her career so as not to be typecast, something she's clearly continued to do.

But Henson knows that she's going to need more than just good work to get equal pay. First, she's going to need Hollywood to adequately fund and promote movies with black leads. To that end, she has recently stepped into a new role: producer. Jenson worked as an executive producer on Proud Mary and will continue in that role on one of her upcoming projects, What Men Want (a female version of Mel Gibson's What Women Want). Ever the chameleon, however, Henson isn't sticking to action flicks and romantic comedies. The actor is also set to produce and star in a new movie about Emmett Till. The movie, about the black 14-year-old who was killed for allegedly whistling at a white woman in 1955 Mississippi. "We don't have a start date yet, but the deal has been done," Henson told GlobalGrind. It's a project she has been eyeing for years, "since Trayvon Martin was murdered," she said.

Just like her character in Acrimony, Henson has gone from a woman scorned to a woman fighting back.