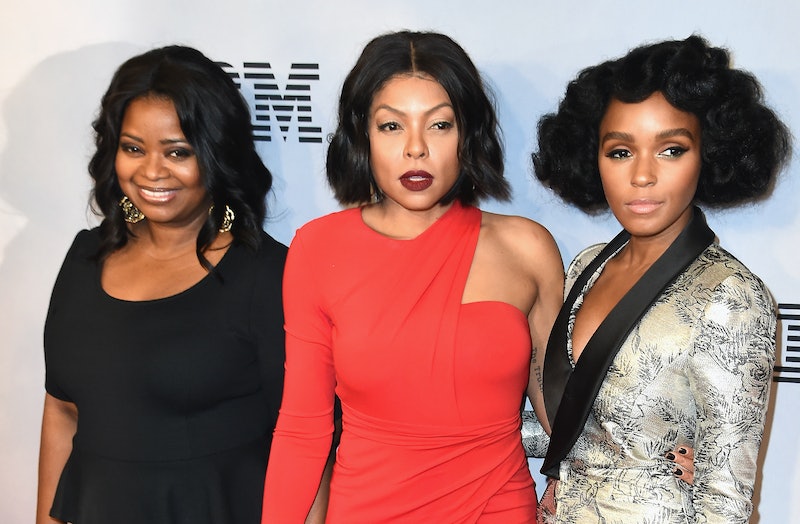 With all of the buzz surrounding the film, Taraji P. Henson made an important distinction about Hidden Figures. In a recent interview with Parade, the actor clarified that the movie is about more than race, and she wants people to realize that. I mean, sure, technically speaking, Hidden Figures is based on the true story of three black women, whose brilliance and mathematical genius help launch a man into the universe as part of the NASA space program during a racially tense time in our country. However, the premise of the film goes far beyond that, as it delves into the lesser mentioned tale and shines a light on the tremendous role that women and minorities have played in this and many other historical moments throughout history. Like those other moments, this story is much bigger than color.

Henson stars in the film as Katherine Johnson, alongside Oscar winner Octavia Spencer as Dorothy Vaughan and singer-turned-actor Janelle Monae as Mary Jackson. During the conversation with Parade, Henson explained that the defining tale simply cannot be labeled by Hollywood as a "black movie." She said,

"Yes, they are brilliant African-American females, and all of that should be celebrated. No matter what your color is, you should be able to look at these women as heroes. These are our new superheroes.”

As the saying goes, all superheroes don't wear capes, and this tale of brave women who stood up against gender and race discrimination to serve behind the scenes of John Glenn's historical launch into space proves just that.

Given the easily accessible knowledge of history books, digital visibility of race relations, and the shocking turn of events that took place during the recent presidential election, I suppose that it doesn't take a rocket scientist to understand that our country hasn't always had the greatest views on diversity and equality, particularly in the work force. To this very day, women still earn 79 cents to every dollar earned by men. However, it does take a rocket scientist to successfully crunch numbers and calculate flight trajectories prior to the information age, in an effort to send a human into space. And Vaughan, Jackson, and Johnson did just that, with admirable resilience against the harrowing discrimination of the 1960s.

So no, Hidden Figures is not about race, nor is it about gender — it's about heroism. I mean, come on, it's not that shocking that a woman or person of color would have the ability to launch a rocket into the atmosphere. But it is extremely important to share the untold story of three American heroes — Vaughan, Jackson, and Johnson — who stood strong in the face of adversity so that others may soar. Why does it matter, you ask? Because, the next generation is watching.