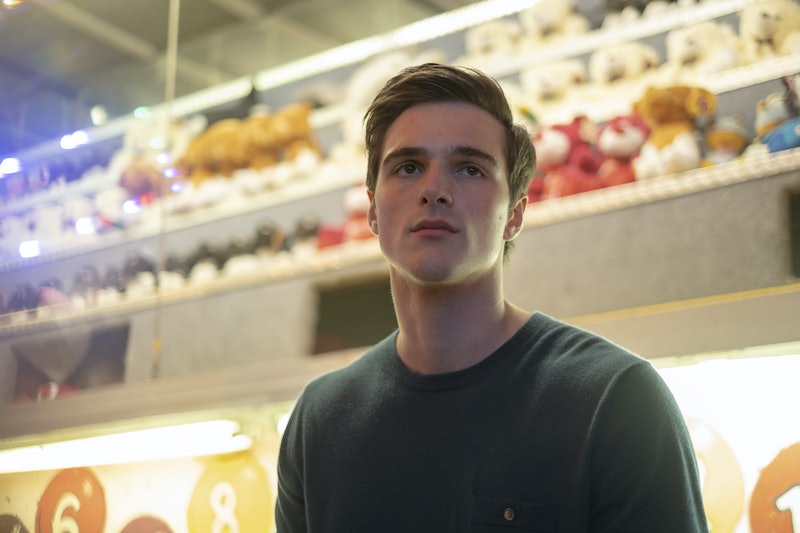 Spoilers ahead for Episode 4 of Euphoria Season 1. In the July 7 episode, HBO's teen drama Euphoria answers one of the questions that it's been building to since its premiere: is Jacob Elordi's Nate secretly a good guy? To put it simply, no, but there's value in exploring why that is. While Nate is marginalized in one sense due to his (likely) identity as a closeted queer man, he's also the textbook image of toxic masculinity. He's unable to separate love from control, relishing the role of being women's Great Protector without realizing how often he is actually the aggressor.

Nate's violent and overbearing tendencies have been apparent since the beginning. He has a laundry list of things he wants a woman to have, and reacts with disgust when they don't conform to his exacting beauty standards. He displays a worrying degree of ownership towards his on again, off again girlfriend Maddy, romanticizing himself as her Superman but hurting her whenever angered (he presses her face against the wall during sex and chokes her at the carnival). After she hooks up with another boy at a party (and then lies about being blackout drunk while it happened), Nate breaks into the guy's house and beats him bloody. Using violence to assert control is exactly what toxic masculinity is, but up until now, Euphoria balanced that out with Nate's sweeter ShyGuy118 persona, hinting that perhaps he was more than just an archetypal, macho jock.

We know from Rue's narration that Nate is likely gay or bisexual, but that he represses that aspect of his identity to damaging extents. Had he been raised in a less oppressive environment with a healthier role model, maybe he could have been different, but thanks to his father, Nate clearly suffers from internalized homophobia. That leads to, among other things, anger towards other LGBTQ people who are openly out and proud of their identity, like Jules is. We see this manifest early on when he catcalls Jules and drives her off the road, then unleashes his fury on her at Chris' party in Euphoria's pilot episode.

One of the issues underlying Nate's homophobia is that being queer doesn't stop him from being rampantly misogynistic (a sensitive issue that has real-life truth to it). Nate paradoxically puts femininity on a pedestal, but his expectations for women are so unrealistic that he ends up punishing them constantly for failing to meet his standards. He feels he can dictate how women act and what women's bodies should look like, and it's never clear if he eventually gravitates towards Jules (who is played by model Hunter Schafer) precisely because she conforms to his beauty ideal, or because he resents her.

With Jules in the park, we can see most clearly how Nate is unable to separate his negative feelings towards women from the love he may feel. If you were confused about his actions, you were meant to be: Elordi confirmed to The Hollywood Reporter that neither he nor Euphoria creator Sam Levinson were entirely sure if Nate lashes out at Jules (threatening to turn her in for child pornography if she ever speaks a word about him or his father's orientation) because he was always manipulating her, or if their texts were sincere, but his anger at Maddy and his father bleed into the scene regardless. "Sometimes we didn't even know why he was doing it," Elordi said, "Because I don't think [Nate] knows either."

Whether or not Nate actually likes Jules, his turbulent inner dialogue is obviously hazardous for the women around him. Media tends to romanticize characters like Nate: villains who have difficult childhoods but who are eventually reformed by a woman's love. Real life is much messier than that. Nate is, at this point, old enough to push back against his father's machismo. Many abusive men have abusive childhoods, but not all men who had abusive childhoods become abusive. It requires an active choice to be better, and Nate is pretty spectacularly failing to do that, either because he doesn't want to or because he's too scared to.

It's possible Nate actually does have genuine feelings for Jules, but as of right now, he's unable to separate loving women from controlling them; to him, these concepts are one and the same. If Nate turned on Jules because he got angry that his father was with her first, that doesn't bode well for any potential relationship. Because Nate is so wrapped up in his toxic masculinity, his love comes with stipulations, and requirements, and a gilded cage. His love has all the markers of an abusive relationship: he thinks the best way to protect women (to keep them on that pedestal that he built) is to essentially own them. It's not the kind of love that Jules, or Maddy, needs.

In contrast to Jules, Rue sees Nate exactly for what he is. It's both why she hates him and why Nate's the perfect foil for her; unlike him, Rue's love for Jules doesn't come with conditions. Her love is pure and uncomplicated and accepting. Where Nate sees Jules as somebody so lovely and different that she needs to be contained, Rue is plainly in awe of Jules, and feels lucky just to be in her presence.

Perhaps the eventual centering of Jules, Rue, and the rest of the women has always been the driving point of the show. Euphoria's main love story was between the two lead girls from the beginning, and we see characters like Kat, Maddy, and Cassie come more into their own this episode. Nate may be wrapped up in his own warped perceptions of himself and others, but his toxicity doesn't mean the other girls can't connect to each other and find a way to feel free — even in spite of the oppressively patriarchal society they're navigating.