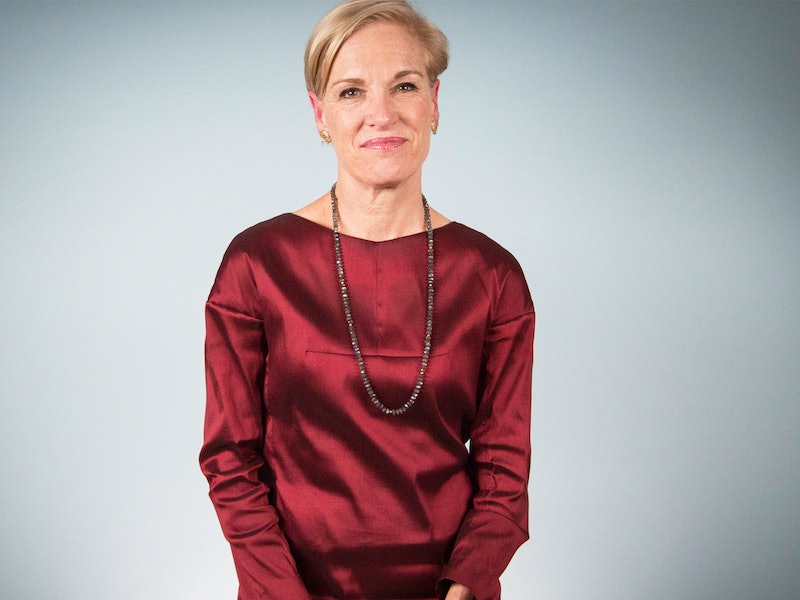 When celebrities come into Bustle HQ in New York, whether it's for a photoshoot, videoshoot, or a Facebook Live, we want to give them the chance to leave their mark. Literally. So we hand them a pen, a piece of paper, a few questions, and ask them to get creative. The rest is up to them. This time, Planned Parenthood President Cecile Richards is leaving her mark in the Bustle Booth.

Richards is a true daughter of Texas. Since 2006, she has been working tirelessly for American women's right to safe and affordable reproductive health care, including the right to legal abortion. This has garnered controversy among the more conservative segments of American society, as well as the wrath of the Republican Party, which has, in most recent efforts, called for the defunding of Planned Parenthood as one of the demands within the American Health Care Act.

Richards is no stranger to such hostility. Back in 2015, House Republicans carried out a five-hour-long hearing with Richards, replete with continuous interruptions and interjections, which she gracefully fielded.

Between ensuring American women are cared for — no matter what, as Planned Parenthood promises — and thwarting attacks from the GOP, Richards generously took a moment out of her impossibly hectic schedule and filled out the Bustle Booth questionnaire. She likes a medium latte to go and her favorite feminist role model is Congresswoman Barbara Jordan (whom I personally also recommend you to learn about). The best part? Richards is a pretty great doodler. Check it out!